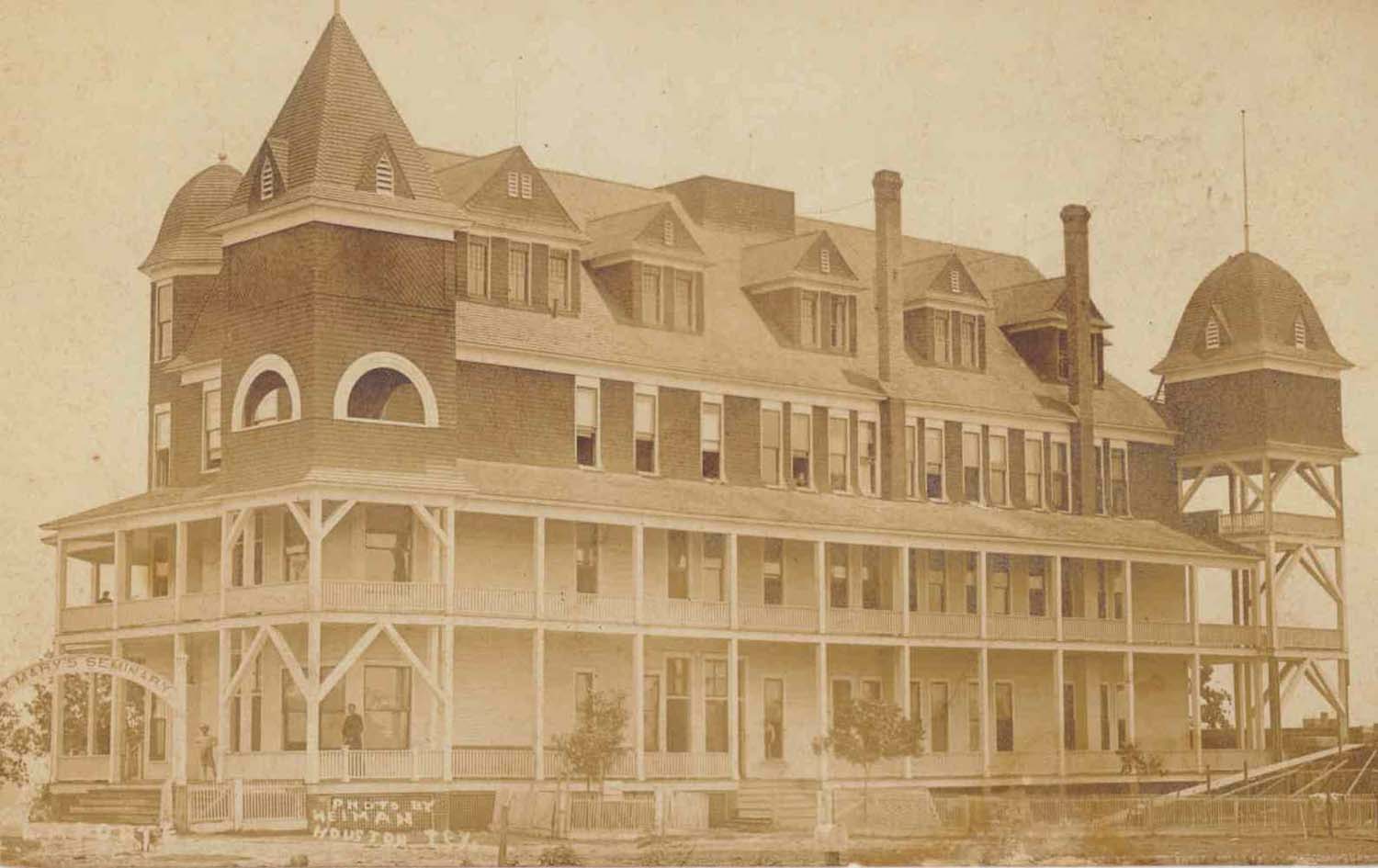 St. Mary’s Seminary, pictured here in 1906, was moved to the banks of Galveston Bay in LaPorte in October 1900, one month after the Great Storm of 1900 devastated Galveston. (Photo courtesy of the Archives Office)

HOUSTON — As the Archdiocese recognizes its 175th anniversary this year, St. Mary’s Seminary is one of its original ministries founded in the mid-1800s.

St. Mary’s Seminary is a theologate for the personal, spiritual, academic and pastoral preparation of men for the Roman Catholic priesthood. Its origins date back to 1901, when St. Mary’s Seminary was established in La Porte. It was then the only Catholic seminary in the state of Texas.

In September of 1954, it was relocated to its present site at 9845 Memorial Drive in Houston. There it primarily serves those men preparing for the diocesan priesthood in the south and southwestern parts of the U.S., reflecting the diversity of peoples and cultures in the Catholic population.

The ministry in the Archdiocese that currently oversees the care and overall well-being of the seminarians enrolled at St. Mary’s is the Office of Vocations, which was founded in 1964. The current director, Father Richard McNeillie, said approximately 44 men are currently enrolled — a number that has steadily increased in recent years.

As one of more than 60 ministries that receive support from the Diocesan Services Fund (DSF), Father McNeillie said these funds are the lifeline of the Office of Vocation’s operations to support the seminarians. He said when the faithful give to the DSF, they directly support their future priests and religious, and young people in the Archdiocese who are discerning their vocational call.

“The Office of Vocations is the Office of Seminarians,” said Father McNeillie. “We take care of all the seminarians while in formation, including their tuition, room and board that are completely DSF funded. I want to give a big thank you to those whose support enables us to help these men to become the amazing priests this Archdiocese needs.”

Viet Nguyen, a seminarian at St. Mary’s Seminary for five years, said he has received many benefits from the programs and services offered by the Office of Vocations for men and women in discernment.

“During my discernment into the seminary, the office provided ample opportunities to further seek and clarify the will of God in my life through events, such as the monthly Discover the Road Less Traveled meetings and Men’s Discernment Retreat,” said Nguyen. “Now, as a seminarian, the Office of Vocations continues to support me by being my advocate throughout my seminary formation, providing events and gatherings in which I build fraternity with my Archdiocesan brothers, as well as providing avenues in which I can serve the people of God.”

Nguyen said that in addition to the support of all aspects of his formation toward the priesthood in the seminary, he has witnessed and participated in efforts by other critical ministries that receive DSF support.

“I have personally seen and been involved with other ministries funded by the DSF, both as a seminarian and before I became one,” said Nguyen. “Prior to seminary, as a registered dental hygienist, I trained and later volunteered extensively at the San José Clinic. I was able to witness and participate in many life-changing dental and medical services that were being provided for the people of God.”

For more information about upcoming discernment events or how to encourage prayer for vocations at the parish level, visit the Office of Vocation’s website at houstonvocations.com or call 713-652-8239. To learn more about St. Mary’s Seminary, visit smseminary.org or call 713-686-4345.

To learn more about the DSF and additional ministries supported by the fund, visit to www.archgh.org/dsf.

The DSF supports over 60 ministries, whether direct service or education, which require this critical funding to remain in operation. Out of each gift given to DSF, 100% of every dollar goes directly to supporting these ministries.