Archdiocese rejoices as four are ordained to the priesthood 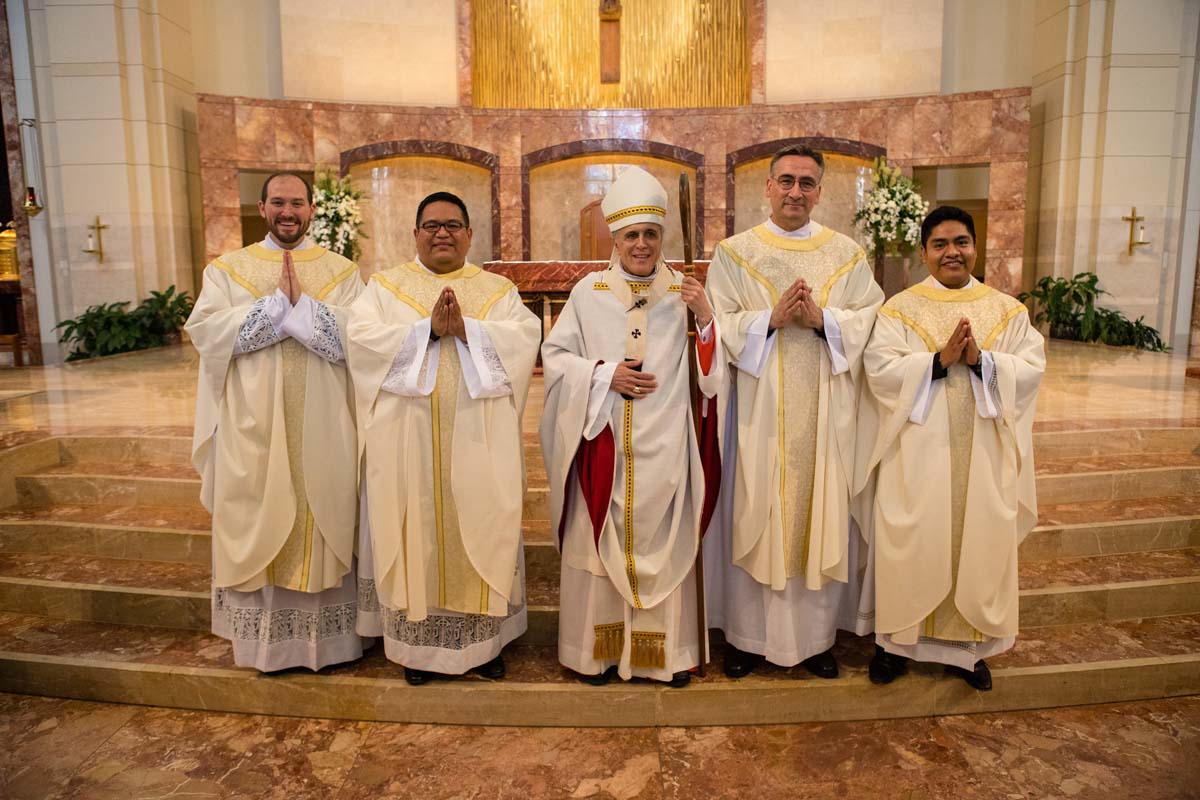 HOUSTON — As the Co-Cathedral of the Sacred Heart’s campanile bells tolled loudly outside the Co-Cathedral building echoing throughout downtown Houston’s south end, inside four newly ordained priests beamed with joy and anticipation as they raised their hands to give a blessing to the packed church.

Cardinal DiNardo echoed Jeremiah: “I will appoint over you shepherds after my own heart.”

He welcomed everyone to the joyous occasion, including the family, friends and extended communities of the four priests to be ordained.

“Thank you to all of you who have come from various parishes of this Archdiocese, who have watched our priests-to-be grow in faith, love and ability to shepherd.”

Hundreds of friends and family of the newly ordained priests joined dozens of priests and deacons from around the Archdiocese for the Ordination Mass.

In his homily, Cardinal DiNardo encouraged the newly ordained priests to be active evangelizers of the Gospel; faithful in the celebration of the Sacraments, especially the Eucharist and Reconciliation; and always present to the needs of the people of God. Cardinal DiNardo said their lives should reflect the teachings shared in their homilies.

Cardinal DiNardo invited those present and those throughout the Archdiocese to pray for the newly ordained priests as they began their new assignments.

The bilingual Mass — with readings in English and Spanish — had the Rite of Ordination, which includes the Calling and Presentation of the Candidates, Election by the bishop and consent of the people, the promise of obedience and an invitation to prayer. During this invitation to prayer, the candidates prostrate themselves on the floor as the congregation invokes the prayers of the saints through a chanted litany and of the Holy Spirit.

Chanting ‘Veni Sancti Spiritus,’ the Imposition of Hands followed, then the newly ordained are vested with their priestly stole and chasuble, presented by seminarians and put on by fellow priests of the Archdiocese.

The new priests’ hands werethen anointed by Cardinal DiNardo and handed the bread and wine, followed by a kiss of peace — a greeting shared by the bishops and several priests of the Archdiocese.

Following the Ordination Mass, hundreds gathered in celebration at St. Mary’s Seminary for a reception. From there, their journey as new priests ordained to minister to both Catholics and non-Catholics alike in the Archdiocese began.