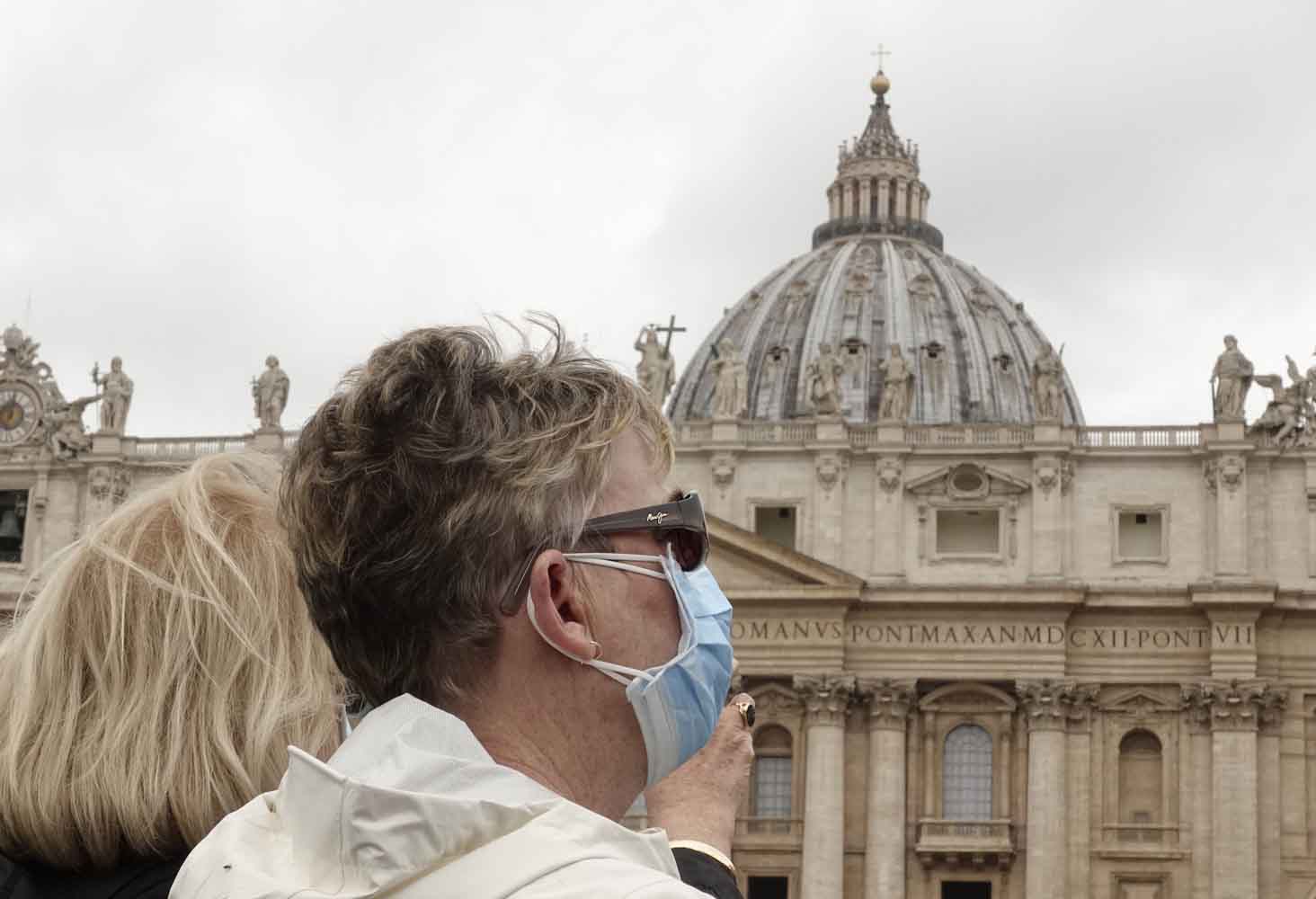 A woman wearing a mask for protection from the coronavirus watches as Pope Francis leads the Angelus from the window of his studio overlooking St. Peter’s Square at the Vatican March 1. (CNS photo)

HOUSTON (CNS) — The Archdiocese of Galveston-Houston joined other Catholic communities around the world in taking precautions to guard against the spread of the coronavirus and reminding parishioners to take commonsense steps related to hygiene in their personal lives.

In a Feb. 29 statement, Daniel Cardinal DiNardo expressed his concerns to Catholics about the potential spread of the coronavirus illness (COVID-19).

Cardinal DiNardo joined other diocesan leaders around the nation in announcing that the Archdiocese urged the reception of Holy Communion in the hand, suspended distribution of the Communion chalice and called for the exchanging the sign of peace or praying the Lord’s Prayer without physical contact.

He also asked people who are ill to refrain from attending Mass, reminding parishioners that the sick are under no obligation to attend weekend Masses.

This was to “help minimize any risk for the members of the liturgical assembly who are present for the reception of the Holy Eucharist,” he said.

He also encouraged empathy for those who may be “uncomfortable with physical contact during times of the Mass, such as the Lord’s Prayer or the Sign of Peace.”

These hygiene practices are common in many Catholic dioceses around the country, especially during flu season.
In a document released by the Archdiocesan Office of Worship to parishes, liturgical ministers, clergy and parishioners were reminded of common hygiene practices. These include covering mouths when coughing or sneezing; keeping hands and fingers away from the face, especially the eyes, nose and mouth; and consistent hand washing habits.

As coronavirus concerns continue, the Office reminded of parallel awareness of the flu, which causes an estimated 36,000 deaths in the U.S. each year.

“Ministers who have the flu or other communicable illness should not serve the liturgical assembly,” the document stated.

Liturgical ministers are at the service of the community. Serving when sick is not appropriate or desired.”

This included altar servers, extraordinary and ordinary ministers of Holy Communion and ushers.

Other encouraged practices included consistent draining and cleaning of Holy water fonts after Masses and large gatherings. This prevents both the build-up of minerals in the vessel and replaces the Holy water with clean Holy water.
The document reiterated that such attention to hygiene is appropriate and common sense, especially during flu season and the advent of the coronavirus.

Cardinal DiNardo urged the faithful to keep praying for those affected worldwide.

“Please continue to pray for those in our communities and around the world who have died and for those who are sick and suffering,” he said.

From Charlotte, North Carolina, to Honolulu, diocesan officials were implementing steps recommended by the U.S. Conference of Catholic Bishops’ (USCCB) Committee on Divine Worship to limit the potential spread of the illness that by March 3 had reached about 70 countries including the United States.

As of March 4, health officials in the U.S. have confirmed more than 100 cases of the illness in 15 states, including at least nine deaths.

Worldwide by March 3, more than 92,000 cases and more than 3,100 deaths have been attributed to the coronavirus, with most in China, the epicenter of the outbreak.

As the number of people testing positive for the coronavirus in Europe continued to grow, the French Shrine of Our Lady of Lourdes announced that pilgrims were still welcome, but the pools the sick bathe in hoping for healing would be closed temporarily.

“Our first concern will always be the safety and health of the pilgrims and the shrine’s working community,” said a note posted Feb. 28 on the shrine’s website. “As a precaution, the pools have been closed until further notice.”

The new measure, announced March 10, was the latest move by the Vatican to help stop the spread of the coronavirus by reducing access to places that attract large groups of people. On March 8, the Vatican closed the Vatican Museums, the necropolis and other museums connected with the Vatican.

"In coordination with measures introduced by Italian authorities," the Vatican said in a communique, "starting today, St. Peter's Square and Basilica will be closed to guided tours and tourists."

Italian police were located as usual at the perimeter around the square that separates Vatican City State and Italian territory, as well as under the colonnade. But they were not allowing people to enter the square unless they could document it was for work reasons or other exceptions currently allowed by Italian law.

A small number of tourists could be seen outside the square, and a group of tourists was looking for information about the Wednesday general audience. The March 11 audience was not going to be a public event but was to feature Pope Francis offering his catechesis broadcast online on Vatican media outlets.

For resources and the most current updates resources involving the Coronavirus disease, visit the Centers for Disease Control and Prevention online at www.cdc.gov.