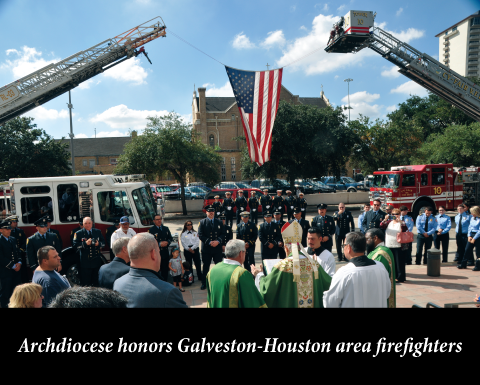 John Ortiz, a Houston Fire Department firefighter at Station 101 and parishioner at All Saints Church in Houston, received the Kimberly Ann Smith Medal Oct. 30. Ortiz, at left, is pictured here with Chief Joseph Gregory, who commended Ortiz for his “servant’s heart” and volunteer work in the parish community. Photo by Jonah Dycus/Herald.

HOUSTON — Every day firefighters dedicate themselves to protecting the citizens of the Galveston-Houston area and their property.

The Archdiocese recognized firefighters for their efforts on Sunday, Oct. 30 by thanking them and praying for them at the Annual Archdiocesan Firefighter Mass. The Mass was celebrated by Archbishop Emeritus Joseph A. Fiorenza

At the start of Mass, Archbishop Fiorenza welcomed the firefighters to the Co-Cathedral and asked “God to have a very special, powerful blessing above all of you, men and women, who defend us day and night, all through the year.”

“We are deeply indebted to you,” he said. “Our safety, in a certain sense, is within your good help for us.”

The Mass, which was sponsored by the Saint Florian Society of the Archdiocese of Galveston-Houston, was held at the Co-Cathedral of the Sacred Heart.

“This Mass is an opportunity for all active and retired firefighters to pray together, to honor those firefighters who have passed and to have a fraternal gathering with other firefighters and their families,” said Chief Joseph Gregory, Mass organizer and Houston firefighter. “This is a dangerous, high-risk profession. The support from family, friends and the community lets our firefighters know they are appreciated.”

John Ortiz, a Houston Fire Department firefighter at Station 101 and parishioner at All Saints Church in Houston, was awarded the Kimberly Ann Smith Memorial Medal by the Saint Florian Society. Since 2001, the medal has been given to an individual that best lives the Society’s core values of integrity, charity and fraternal brotherhood. Formed in 1998, the Saint Florian Society of the Archdiocese of Galveston-Houston serves as a formal group of firefighters that wish to promote Christian Values, strive to live by God’s Commandments, and share a devotion to God while serving in the fire service.

During the Mass, a special tribute was given to firefighters who have passed in the previous year. The tribute included a reading of the names of deceased firefighters, each accompanied by the ringing of a bell.