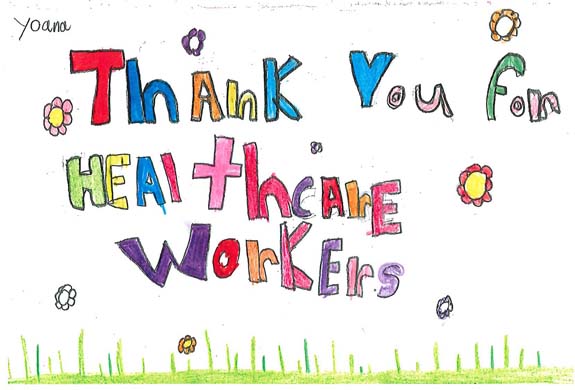 HOUSTON — Students at several Catholic schools around the Archdiocese made cards to show their appreciation for area healthcare workers, including nurses, doctors and staff at St. Luke’s hospitals.

Joel James, Texas division senior vice president of Mission Integration at St. Luke’s Health, said a risk manager came up with the idea of getting the healthcare workers cards to lift their spirits during the long battle with COVID-19.

“We were brainstorming with each other in the executive team on how can we encourage these brave caregivers that are just relentlessly tending to people,” he said.

Cards, posters and drawings poured in from schools in the Archdiocese. Over a thousand cards were received, and even a video was made by one of the schools. Many included handwritten messages of gratitude, with one from a 7-year-old student: “Please do not give up because my uncle died from COVID-19... I want to be a doctor when I grow up I love you guys so much you are the best ever!!!”

“It will make you cry because the children are so sweet,” he said. “It is the cutest thing you ever saw. We’re using (parts of the video) in our town hall meetings.”

James said they asked as many people in the community as they could, and it was the Catholic schools who responded “Fast and in quantity.”

He said the cards were uplifting for a group of workers who are dealing with very difficult circumstances.

“We went through one surge, and then we had a second surge come through, and Delta... We actually peaked at a higher level of people being sick (this time) than we did at the peak of the first surge,” James said.

He added that the entire Texas Medical Center lost staff, which means the healthcare workers are doing 100% of the work that the COVID-19 pandemic demanded but with only 75% of the staff they had in January 2021.

“If you can imagine going through a very traumatizing, very difficult task, getting through it, huffing and thinking, ‘well, we got through that,’ and looking up and somebody saying, ‘Well, I got another one for you, and it’s going to be a little harder,” he said. “It’s unbelievable. The people who are left are true heroes. They’re the toughest people that, I think, God made.”

James says that while the healthcare workers and staff are heroes to all of us, they almost reject the word “hero.”

“They don’t want to be seen as extraordinary, but they do want to be seen,” he said. “One of the greatest rewards they can get right now is just being understood. They just want people to know. And that’s what these cards have been doing.”

James said banners were created so that, eventually, the 18 St. Luke’s hospital locations in his division would get a banner and some cards. Cards were also available virtually through a shared drive in the hospital’s system.

“I don’t know how to say ‘thank you’ enough,” he said. “I’m really struggling. This kind of appreciation from the pure hearts of the children is the kind of thing they need.” †