Archbishop Fiorenza’s legacy of faith, service was like no other 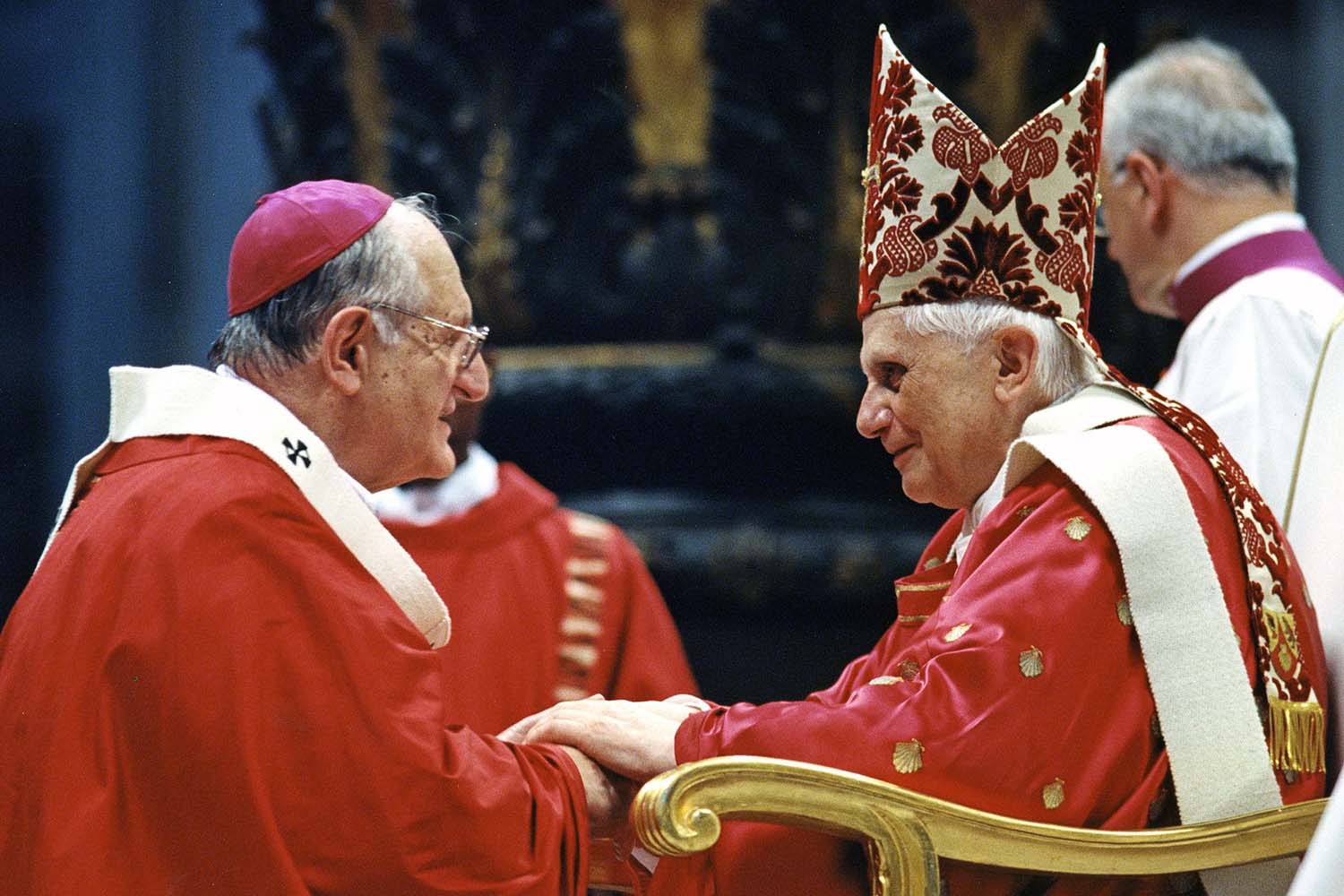 Pope Benedict XVI greets Archbishop Joseph A. Fiorenza after bestowing the pallium on Archbishop Fiorenza during a Mass in St. Peter’s Basilica at the Vatican on June 29, 2005. (CNS photo)

HOUSTON — Archbishop Emeritus Joseph A. Fiorenza, the long-time bishop of Galveston-Houston and a tireless social justice advocate throughout his priesthood, episcopacy and in retirement, died Sept. 19. He was 91.

The Beaumont native served as bishop of the Diocese of Galveston-Houston from 1985 to 2006 and was made Archbishop in 2004 when the diocese was elevated to the status of Archdiocese by then-pope, St. John Paul II.

Ever committed to serving the people of Galveston-Houston, Archbishop Fiorenza was a steadfast advocate for social justice issues and a supporter of interfaith collaboration for positive social change across all social and economic borders. As a young priest, he had marched with Dr. Martin Luther King Jr. in Selma; in 2020, he spoke at a panel discussion regarding race relations hosted by Interfaith Ministries. He was joined by fellow Houston faith and civil rights leaders Rev. William Lawson, Pastor Emeritus of Wheeler Avenue Baptist Church in Houston, and the late Rabbi Emeritus Samuel Karff of Congregation Beth Israel — the “Three Amigos.”

“Archbishop was always attentive to the marginalized, to those in the periphery ... from the African Americans in the 1960s to the welcoming of the many immigrants from all over the world, especially from Latin America,” said Auxiliary Bishop Italo Dell’Oro, CRS, who also noted that Archbishop issued the diocesan Hispanic pastoral plan in the 1990s. Archbishop Fiorenza was the active bishop in Galveston-Houston when Bishop Dell’Oro arrived in the local diocese as a parish priest.

Karen Clifton, founding executive director of Catholic Mobilizing Network and currently the executive coordinator of Catholic Prison Ministries Coalition (CPMC), said Archbishop Fiorenza was “a pastoral bishop who, through his example, mentored many to work towards justice. He leads with a prayerful, courageous stance for the least among us without fear of opposition,” she said in an article celebrating Archbishop’s 90th birthday last year.

Even in retirement, Clifton noted that Archbishop Fiorenza’s passion for justice never wavered, which gave her and others “courage to follow in his shadow and join him in pushing forward one of the many issues he champions.” She referred to him “as a great leader by his example of never compromising his beliefs to gain status or power, and through humble leadership, knowing his own weaknesses and tolerating the weaknesses of others.”

Joseph Anthony Fiorenza was born Jan. 25, 1931, in Beaumont, Texas. The son of Italian immigrant parents, he was the second of four children born to Anthony and Grace Fiorenza. Archbishop Fiorenza graduated from St. Anthony High School on May 29, 1947. He began studies for the priesthood the same year and was ordained a priest for the then-Diocese of Galveston-Houston on May 29, 1954.
Archbishop Fiorenza’s cousin, Sister Benignus Galiano, O.P., said when he was young, he would pretend to be a priest.

“He was meant to be a priest. His mother told us when he was a little boy he pretended to be a priest. From an early age, he knew what he wanted to do,” Sister Galiano stated in an article that ran in the Texas Catholic Herald last year.

Following his ordination to the priesthood, then-“Father Joe” served as an assistant pastor in Houston for three years and then became the professor of medical ethics at Dominican College and chaplain of St. Joseph Hospital in Houston. From 1959 to 1967, he was the administrator of Sacred Heart Co-Cathedral. He was pastor of several churches from 1967 to 1973 when he was named chancellor of Galveston-Houston.

With an eye to the future and the growth of the Church during his time as ordinary of the Archdiocese, Archbishop Fiorenza became acutely aware of the need for the burgeoning local Church to expand its spiritual home in response to the vastness of the faithful.

He dedicated himself to building the new Co-Cathedral of the Sacred Heart, a sacred space in the heart of downtown Houston where all were welcome to worship. Through his commitment and support of the campaign, the Co-Cathedral opened its doors to the people of Galveston-Houston on April 2, 2008.

Throughout his tenure as shepherd of Galveston-Houston, Archbishop Fiorenza also served the Church on a national level as the president of the National Conference of Catholic Bishops (1998-2001). In this responsibility, he served as the chief spokesman for 3,000 active Catholic bishops in the U.S.

His memberships have included the Bishops’ Committees for Black Catholics, Science and Human Values, Foreign Missions, and Social Development and World Peace.

On a daily basis until his death, Archbishop Fiorenza continued his faithful commitment to the Church in Galveston-Houston and to all brothers and sisters in the community.