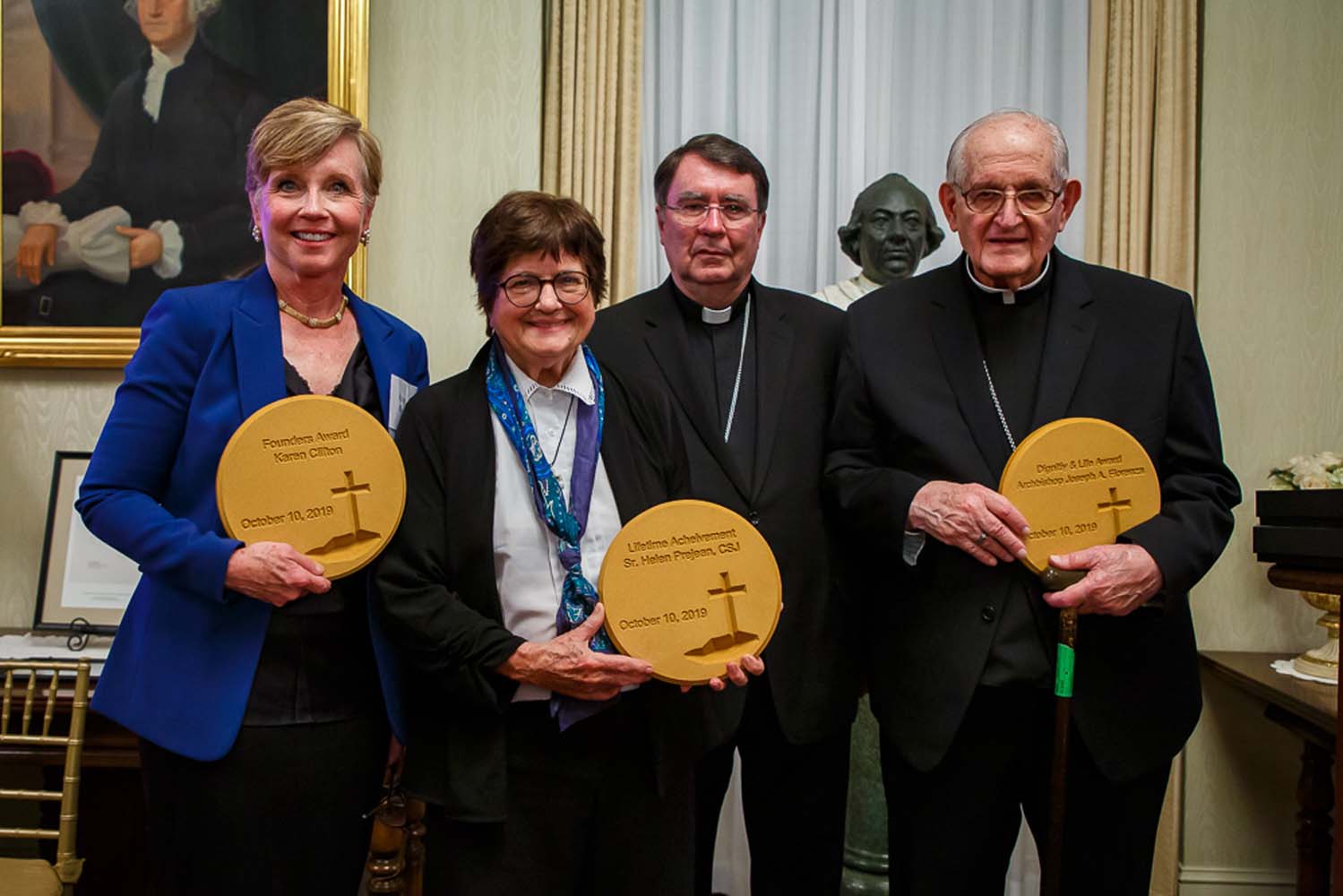 Archbishop Emeritus Joseph A. Fiorenza, at right seen with papal nuncio Archbishop Christophe Pierre, is honored during an Oct. 10 gathering at the Vatican Embassy in Washington to celebrate the 10th anniversary celebration of the Catholic Mobilizing Network, a group that works to end the death penalty. With Archbishop Fiorenza, the group also honored Sister Helen Prejean, second from left, and Karen Clifton. Archbishop Fiorenza was the former episcopal moderator for the organization. (Photo by Jim stipe/Catholic Mobilizing Network)

WASHINGTON (CNS) — At the 10th-anniversary celebration of the Catholic Mobilizing Network, a group that works to end the death penalty, the emphasis was more on the work ahead than on previous accomplishments.

Archbishop Emeritus Joseph A. Fiorenza was among the three honorees at the ceremony held on the World Day Against the Death Penalty, Oct. 10, at the Vatican Embassy in Washington. Other honorees were Karen Clifton, founder of the network, and Sister Helen Prejean, a sister of St. Joseph of Medaille who is a longtime opponent of capital punishment.

“A lot has changed in our moving toward the abolition of the death penalty,” Clifton said.

“I’m counting on you to carry it through to the finish line,” she urged the group of Catholic leaders and anti-death-penalty advocates.

Clifton said Sister Prejean’s stories about ministering to death-row inmates “woke me up.”

Richard Dieter, a board member of the Catholic Mobilizing Network and former executive director of Death Penalty Information Center, said Sister Prejean has been “a rock to all of us in the death penalty movement.”

Sister Prejean read to the audience from the preface of her book, “River of Fire: My Spiritual Journey,” which describes the first execution she witnessed with this description: “No religious leaders protested the killing that night. But I was there. I saw it with my own eyes. And what I saw set my soul on fire — a fire that burns in me still.”

“That fire is here tonight,” she said, thanking advocates for their ongoing work.

She pointed out that Catholic attitudes have changed about the death penalty, telling the group that in the 1980s, when she started her ministry, Catholics were primarily in favor of capital punishment.

That attitude change hasn’t been complete, as Archbishop Fiorenza said.

He said Pope Francis has made Church teaching of calling for the end of the death penalty “abundantly clear,” but he said that this still has not been accepted by all U.S. Catholics.

“That’s our work,” he challenged the group.

Archbishop Fiorenza, a former episcopal moderator for the Catholic Mobilizing Network and former president of what is now U.S. Bishops Conference, said the “struggle goes on” to increase Catholic opposition to the death penalty.

Archbishop Fiorenza helped to launch the U.S. bishops’ effort to abolish the death penalty. During his tenure as president, he consistently called on the nation’s leaders like then-President Bill Clinton to end the use of the death penalty and impose a moratorium.

Bishop Daniel E. Flores of Brownsville, Texas, current episcopal moderator of the network, echoed a similar sentiment in his closing remarks, saying: “We live in a culture that likes to think of itself in favor of life except with the death penalty, an unintended pregnancy, a terminal illness or immigrants at the border.”

It is in these difficult circumstances, he said, that the Church must be the most clear in affirming the dignity of life.
Archbishop Christophe Pierre, the Vatican nuncio to the U.S., welcomed guests to the “Holy Father’s house” and told them the pope is “supportive of your work, so it is fitting that you should be here.”