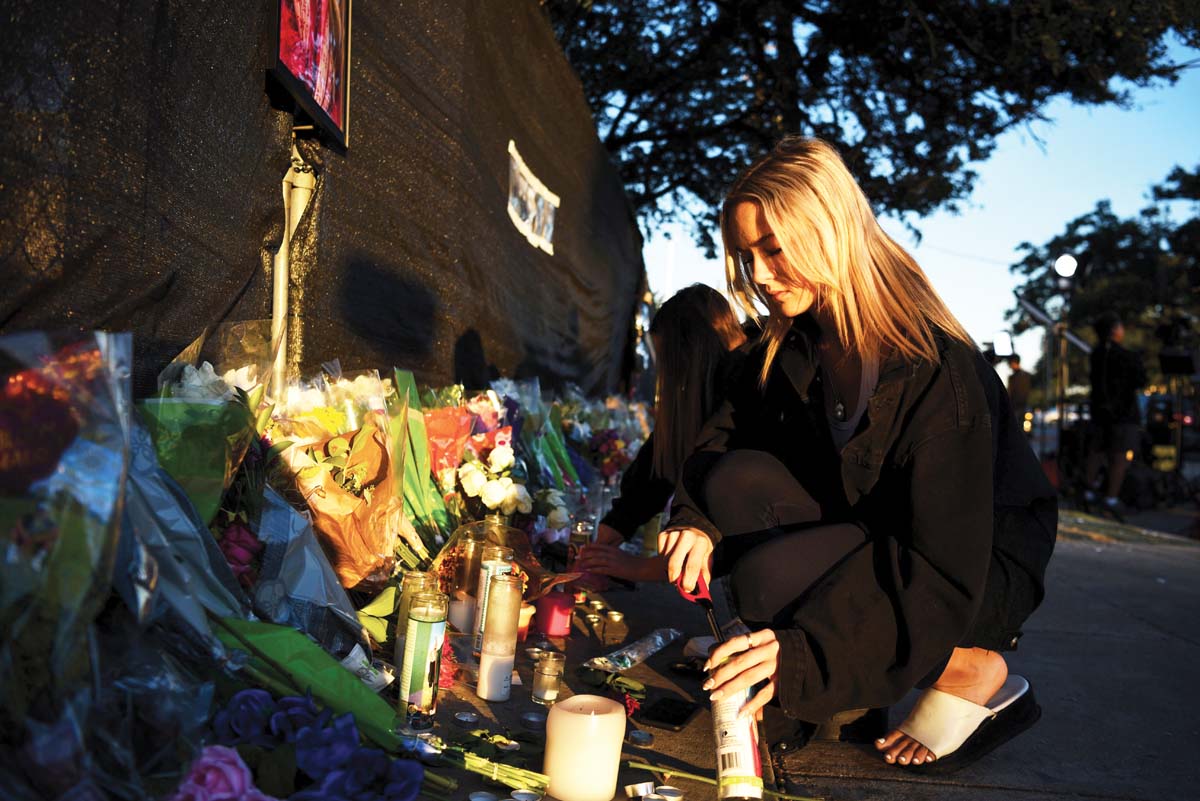 Lola Lindroos, 16, lights a candle at a makeshift memorial Nov. 8 for the 10 concertgoers who died in a crowd surge during rapper Travis Scott’s AstroWorld Festival Nov. 5 at NRG Park. Lindroos was one of the 50,000 people who attended the event. Annunciation Catholic Church in downtown Houston hosted a prayer vigil on Nov. 8 to pray for those impacted by the tragedy. (Photos by CNS and courtesy of the Office of Harris County Judge Lina Hildago)

HOUSTON — Named after the encounter between the Archangel Gabriel and the Virgin Mary recounted in Luke’s Gospel, when the archangel declared to her, “Be not afraid,” Annunciation Catholic Church in downtown Houston opened its doors as a place of peace and refuge to host a prayer vigil on Nov. 7 to pray for and honor the souls of the people who died during a fatal crowd surge at a Houston music festival Nov. 5.

McIngvale, a Catholic and parishioner at Assumption Catholic Church in Houston, worked with Father Felix to coordinate and host the event. Other city officials, including Houston Fire Department Chief Sam Peña and Fort Bend County Sheriff Eric Fagan, also attended the event. Several members of the Dominican Sisters of Mary Immaculate Province were also in attendance. 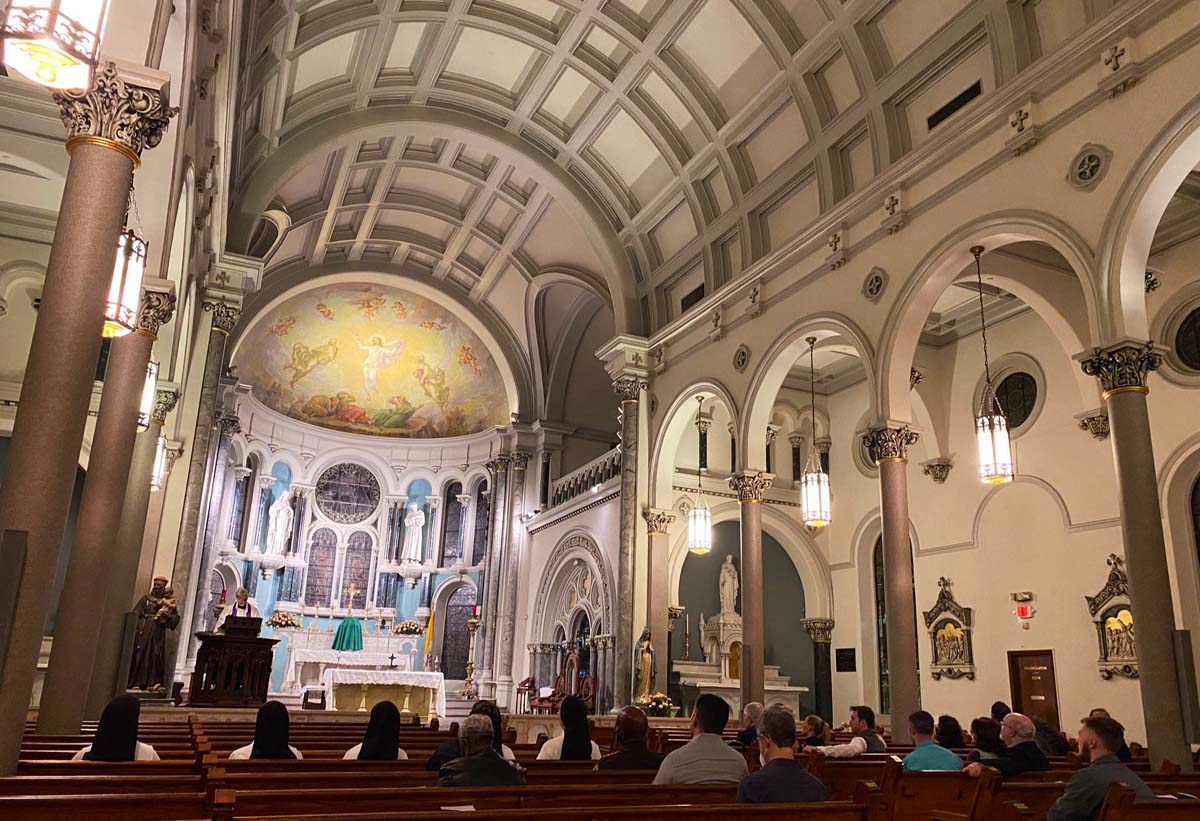 Understanding the experience of losing family, Father Felix embraced the vigil as an opportunity for the Church to step in share its compassion and outreach to people in times of suffering and loss.

“As a pastor caring for souls, it’s important to reach out to those who are grieving,” he said. “They’re facing such loss, a myriad of emotions, and [the vigil] was a way to show that the Church is here for them and that God cares.”

He drew a parallel between Gabriel’s Annunciation message to Mary, when the archangel said, “Do not be afraid,” and announced God’s plan to her.

Father Felix found it appropriate that the parish was asked to host the vigil.

“We have the mission of announcing God’s plan [and love] to people who may not be able to see past what they’re facing,” and to share the Good News, he said, especially considering its long history of outreach since its founding 150 years ago. The parish was a hub of pastoral care during major city disasters and events, such as during World War II and Hurricane Harvey in 2017 when the nearby convention center hosted displaced Houstonians.

Dozens of people were seen in the weeks after the festival at NRG Park, paying their respects to the 10 people who died, leaving flowers and votive candles alongside messages of hope and care to remember them.

These acts carry even more meaning for Catholics, especially during the month of November when the Church prays for and remembers those who have died following All Souls Day. Votive candles lit in prayer flickered in the corners of the ornate downtown parish.

“It’s important to pray for the dead and to be available to offer the light of our faith and to offer consolation,” he said. “While we don’t know the state of their souls... we pray for the dead in spiritual solidarity with the Communion of Saints.”

Father Felix led a Vigil for the Deceased — a special Liturgy celebrated to pray for the dead. Following the Liturgy, he also prayed the Rosary, encouraging those attending to pray with him and to turn to the Blessed Mother for her intercession. He hoped it was a source of inspiration and consolation for those attending, several who expressed their gratitude for the vigil to him later.

Father Felix was grateful for McIngvale’s invitation to host the vigil, calling it a “beautiful collaboration” between laity and clergy and a chance for the Church to highlight its mission to serve others.

The AstroWorld Festival, hosted by performer and Missouri City-native Travis Scott, drew more than 50,000 people to the music festival. During his performance, the crowds of audience members began to surge toward the stage and bordering security barricades, crushing attendees.

By Nov. 8, officials reported that 300 people were treated for injuries at the festival site, and 25 people were hospitalized. Victims who died ranged in ages between 9 and 27, eight of them at the concert and two at local hospitals.

The youngest, 9-year-old Ezra Blount, was placed in a medically induced coma after suffering serious injuries during the surge of fans, according to the Associated Press. He died on Nov. 14.

According to reports, the young boy was sitting on his father’s shoulders when the man lost consciousness. When he came to, his son was missing. Following a frantic search, he later found his son at a hospital with serious injuries.

Local officials said they are continuing a series of investigations following the fatal event.

We pray for the repose of the souls of the men and women who died in the AstroWorld tragedy, as well as for the comfort and healing of their loved ones:

A Prayer for the Dead

In your hands, O Lord, we humbly entrust our brothers and sisters. In this life you embraced them with your tender love; deliver them now from every evil and bid them eternal rest.

The old order has passed away: welcome them into paradise, where there will be no sorrow, no weeping or pain, but fullness of peace and joy with your Son and the Holy Spirit forever and ever. Amen.