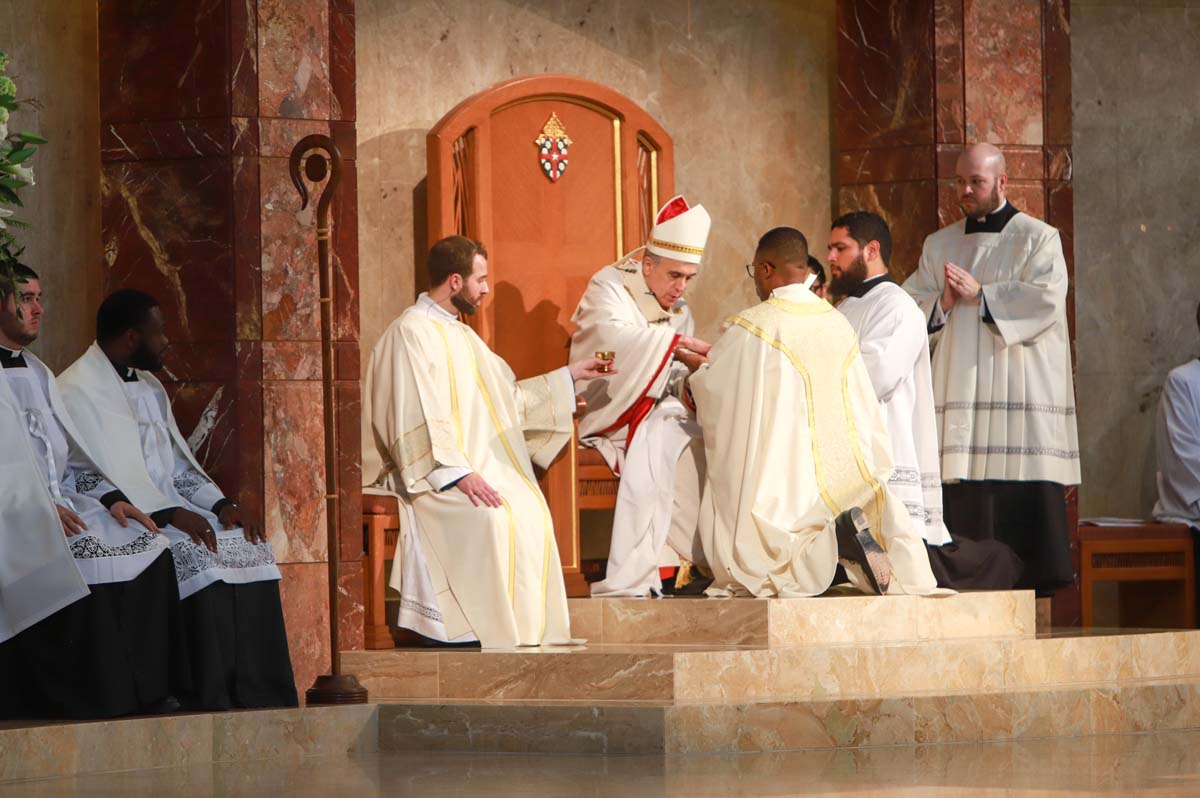 More than 2,100 faithful packed the Co-Cathedral of the Sacred Heart to standing-room-only to witness the ordination of seven priests by Daniel Cardinal DiNardo at a nearly three-hour Mass on June 1, 2019.

This included the priest rectory, which allows the clergy and staff to be more readily available to serve, as well as repairs to the community center building.

He said this facility has been instrumental in the availability of religious education programs and other services and activities that help maintain the social and cultural life of the parish. It also currently serves as the worship space for Mass and celebrating the Sacraments, because the old church has been condemned due to the extensive damage it received during the storm.

Our Lady of Mount Carmel Catholic Church, near the Hobby Airport, was reopened December 2018 right before Christmas after a year and five months of repairing damages from Hurricane Harvey flooding.

During the August 2017 storm, water poured through the damaged roof, soaking the interior, pews and other items that needed to either be replaced or repaired.

The hacienda-style roof tiles on the church were basically antiques and too expensive to replace. Even using shingles, the cost of replacing the roof was more than $200,000, Father Abelardo Cobos said.

But even the insurance deductible was more than the church had so the Archdiocese helped them to apply for grants, said Archdiocese’s Risk Management Director Kirk Jenings.

Water from the storm infiltrated the sanctuary, creating mold that had to be removed throughout the church. Asbestos remediation was done even before any other repairs.

Joyful parishioners returned to Our Lady of Mount Carmel Catholic Church to celebrate Mass with Daniel Cardinal DiNardo on Dec. 22 at Advent’s end right before Christmas. In addition to the beautifully remodeled sanctuary with its iconic large crucifix of Jesus hanging over the altar, redone interior and bright lighting, a new namesake art piece hangs above the altar.

An original three-panel mural by artist Leopoldo Cuspinera Madrigal highlights a drawing of Our Lady with the mountains of Mount Carmel behind her amidst clouds.

On March 25, as a collaborative effort with the Office of Evangelization and Catechesis, the Office of Pro-Life Services will be hosting a workshop on the 25th Anniversary of Evangelium Vitae, St. John Paul’s Encyclical on building a Culture of Life. The workshop will specifically be focusing on Church teaching on the death penalty and issues of development of doctrine, Church history and Catholic Social Teaching in application of the death penalty.

The ministry is also hosting Catholic bioethics sessions that focus on three main sections: beginning of life, end of life and medical ethics.

Each course is intended for the general adult learner and addresses issues likely to arise in the context of one’s personal decision-making; that of family and friends; and in political/media-related conversations.

Beginning of life covers issues such as the ethics of reproductive technologies (IVF, surrogacy, embryo adoption), contraception and sterilization, handling situations where the mom’s life is in danger during pregnancy (including but not limited to ectopic pregnancy).

End of life deals with issues of ordinary and extraordinary care (including when a Catholic may decline particular medical treatments), how nutrition and hydration differs in Catholic teaching from “medical” care, the ethics of advance directives and do-not-resuscitate orders, definitions of death and conflicts between family and medical providers at the end of life.

Medical ethics deals with the Catholic view of the relationship between patient and medical provider, conscience rights of medical providers, ethical issues including organ donation and transplant, human experimentation — including treatments for gender dysphoria — and gender ideology.

Special Youth Services, an outreach program of the Archdiocese of Galveston-Houston, continues to help shape the lives of children by putting those who made mistakes back on the right track.

The ministry focuses on helping incarcerated youths between the ages of 10 and 17 who have committed crimes that include fighting, aggravated assault and even murder. Many are receiving treatment for drugs, sex offenses and psychological problems.

In addition to their Saintly Saturday events, Special Youth Services also hosts the Annual Bible Bowl during the summer. Held at both Fort Bend and Harris County, it is an event where all the facilities compete in a tournament of Bible trivia.
The ministry also has begun a recruiting effort called Street Saints, which is a spiritual mentorship program offered through St. Ignatius’ Outreach programs.