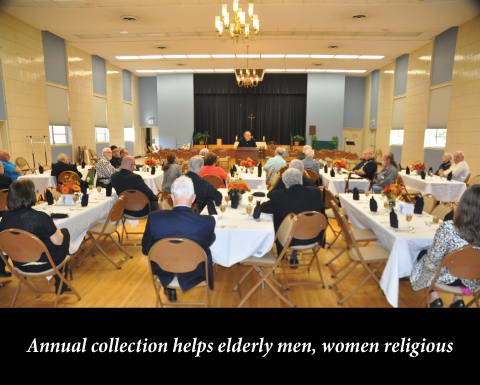 WASHINGTON — The annual Retirement Fund for Religious collection will be held Dec. 10 to 11 in most U.S. parishes.

The appeal raised $30.7 million in 2015, the sixth highest total in its history. As a result, the NRRO distributed $25 million to 401 religious communities across the county. Communities utilize this assistance to bolster retirement savings and subsidize such day-to-day expenses as prescription medications and nursing care. Throughout the year, additional funding is allocated for religious congregations with the greatest needs. A portion of the proceeds also supports education in retirement planning and eldercare delivery.

“The ongoing generosity toward the needs of senior religious is truly heartwarming,” said Sister Stephanie Still, a member of the Sisters of the Presentation and the newly appointed executive director of the NRRO.
The U.S. bishops initiated the Retirement Fund for Religious in 1988 to address the significant lack of retirement funding among religious communities in the United States. Proceeds are distributed to eligible communities to help underwrite retirement and health-care expenses. Since the collection began, Catholics have contributed more than $785 million. Almost 95 percent of donations directly support senior religious and their communities.

Despite overwhelming generosity to the collection, many religious communities continue to struggle to provide for aging members. Of 550 communities submitting data to the NRRO in 2015, only 8 percent were adequately funded for retirement.

Religious communities are financially autonomous and thus responsible for the care and support of all members. Historically, Catholic sisters, brothers and religious order priests — known collectively as women and men religious — ministered for small stipends. As a result, many religious communities now lack adequate retirement savings. Compounding the funding shortage are the rising cost of care and the substantial loss of income that has resulted from the declining number of religious able to serve in compensated ministry.

“Donations to the Retirement Fund for Religious enable our office to provide financial assistance, educational programming and resources that help religious communities reduce funding deficits and plan for long-term retirement needs,” said Sister Still. “Religious communities are profoundly grateful for this support and are careful stewards of each dollar received.”

More information is available at www.retiredreligious.org.

Every year, Cardinal DiNardo celebrates Mass and spends time with retired priests in the Archdiocese of Galveston-Houston at the gathering. The event is sponsored by the Clergy Pastoral Outreach Ministry of the Archdiocese.

The first annual Special Collection for Retired Priests was held at Galveston-Houston parishes on Nov. 5 - 6.