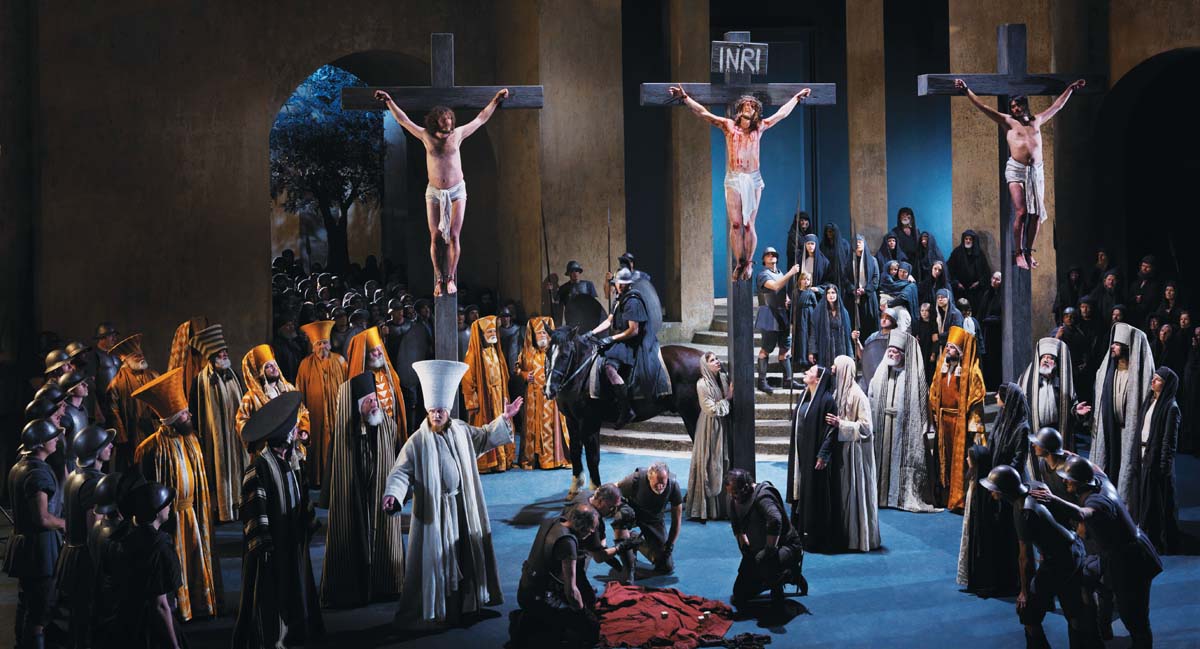 A German town in the Bavarian Alps keeps its promise to God since 1633 to produce a major Passion Play of Jesus Christ’s life, crucifixion, and resurrection. Photos counterclockwise show Jesus breaking bread with his disciples; praying in the garden as his disciples sleep; and many of the residents of Oberammergau act in the play during the trial of Jesus. Photos courtesy of the German Tourist Office.

OBERAMMERGAU, Germany — As churches around the Archdiocese of Galveston-Houston during Easter season prepare their own Passion Plays of the life, crucifixion and resurrection of Jesus Christ, an ancient production that started in Germany in 1633 continues its promise to God.

That year the villagers of Oberammergau in the Bavarian Alps vowed to perform a major rendition of the Passion play every 10 years if they were spared from further death by the Black Plague. Cases of the bubonic plague slowed from 20 in March of 1633 to a trickle of one death in their town in July 1633. On Pentecost 1634, they fulfilled their promise for the first time and put on the play.

Now even today, more than 2,000 actors ranging from children to elderly are rehearsing for their 2020 Passion Play, almost half of the 5,000-plus residents of the town. Set for May 16 through Oct. 4 next year, 103 performances are planned for the five-hour production with a meal break in between.

The German Tourist Office recently brought both the director and one of the actors who plays Christ to Houston to discuss the Passion Play that is held in a specially built theater, one of the world’s largest open-air stage with a roofed audience area and 4,500 seats.

Frederik Mayet, one of two actors who play Jesus, said, “This is quite an undertaking. Many of us sacrifice our work and vacation time for the honor to take part in this.”

Principal director Christian Stuckl said, “I’ve been in this play since I was a child and my father is also in the play. It used to be that you had to be Catholic and from the town to be in the play. Now we have Catholics, Protestants and Muslims.”

The diversity is a far cry compared when Adolf Hitler as Fuhrer attended the 1934 Passion Play, the 33rd year for the performance. But World War II prevented any other production of the play until being resurrected in 1950. Dwight D. Eisenhower, then the highest-ranking representative of the Allied Forces, attended the play that year.

Another major celebration in Germany in 2020 is the 250th birthday of genius composer Ludwig van Beethoven with concerts, exhibitions, lecture series and other events throughout the country, according to German Tourist officials.

For information on the play, check the website www.passionsspiele-oberammergau.de/en or various travel agents for package deals. For general travel information, www.germany.travel.