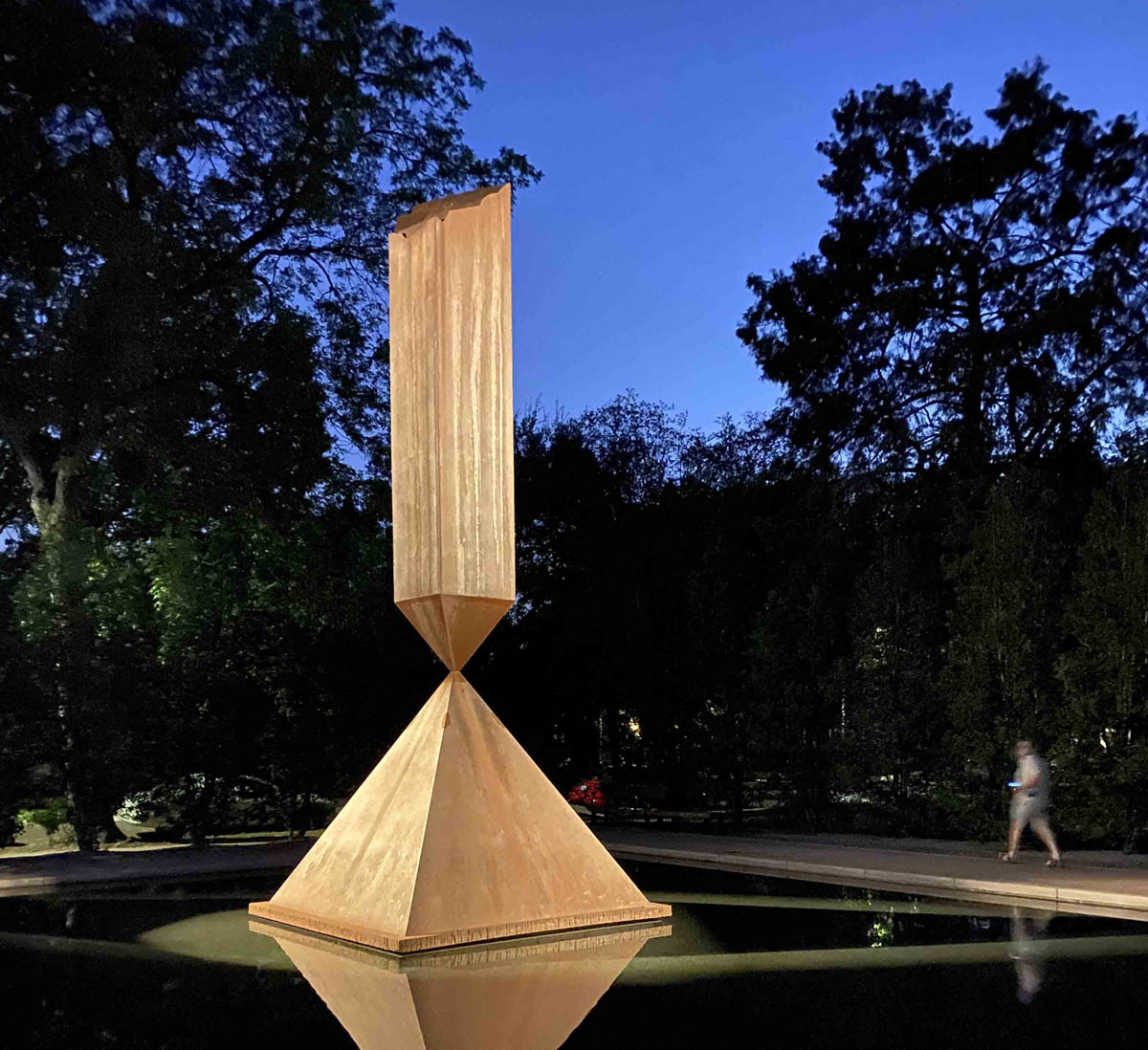 The “Broken Obelisk” is seen in a reflecting pool at the Rothko Chapel Plaza in Houston. The Rothko Chapel celebrated its 50th anniversary on Feb. 28. Archbishop Emeritus Joseph A. Fiorenza, a longtime member of the Chapel’s community, gave the virtual event’s invocation. (Photo by James Ramos/Herald)

HOUSTON — In his invocation during the Rothko Chapel’s 50th anniversary celebration on Feb. 28, Archbishop Emeritus Joseph A. Fiorenza recognized the “fortuitous occasion” that the event happened during the first International Day of Human Fraternity.

Well known for its commitment to ecumenism and social justice, the Rothko Chapel, located in Houston’s Montrose neighborhood, marked its 50th anniversary with a virtual event that featured a host of religious and civic leaders, including Rev. William A. Lawson, Archbishop Fiorenza’s long-time friend. Rev. Lawson gave the event’s closing benediction.

“It was the dream of John and Dominque de Menil that this chapel be a special place where love and the search for truth, as unifying principles, would engage both those of religious beliefs and those with none, in a common search for a human fraternity of brothers and sisters of a common Father,” said Archbishop Fiorenza.

Archbishop Fiorenza drew a parallel between the Rothko Chapel’s efforts to unify with Pope Francis’s 2019 establishment of the “High Committee of Human Fraternity” with Sheikh Ahmad El-Tayeb, the grand imam of al-Azhar, the first mosque established in Cairo, Egypt.

Archbishop Fiorenza said the pope greeted the grand imam by saying: “my brother, my friend, my companion in the challenges and risk in the struggle for fraternity.”
Archbishop Fiorenza quoted Pope Francis’s words that the pontiff gave during a virtual Feb. 5 event for the first International Day of Human Fraternity.

True fraternity is a way of life

Adjacent to the Menil Collection and the University of St. Thomas, the Rothko Chapel was founded in 1971. The chapel, located at 3900 Yupon St. in Houston, features 14 large murals by Mark Rothko. Both the chapel and plaza were renovated in 2019, reopening in 2020.

“For 50 years, the Rothko Chapel has been a special place where people of different cultures, traditions and citizenships are respected, and true fraternity is a way of life, without which there is no justice and no peace in the larger community,” Archbishop Fiorenza said. “The Rothko Chapel has invited people of goodwill to spend time in its sacred space for spiritual renewal and a sense of contact with all humanity.”

Again quoting Pope Francis, Archbishop Fiorenza said, “‘unless we build this fraternity, our world without brothers and sisters to one another, is a world without concern for the other as if he or she doesn’t exist.’ Such a lack of true fraternity imperils the world in which we live.”

The Rothko Chapel is an invitation to “serious reflection” on the importance of human fraternity, according to Archbishop Fiorenza.

“A world without true fraternity among all people is a world fraught with dangers to our civilization, way of life and world peace,” he said. “It is a sacred place where human fraternity is a reality and where ‘love and the search for truth’ embrace those of religious faith and all people of goodwill.”

In its efforts for ecumenism and social justice, and dialogue, the Rothko Chapel has long included a Catholic perspective and recognition in its myriad of voices.

In 1986, The Rothko Chapel gave its first biennial Óscar Romero Award, which recognizes human rights advocacy. The award is named after Archbishop Óscar Romero of San Salvador, who was murdered in 1980 for speaking up against injustices in his home country of El Salvador. St. Romero was beatified in 2015 and canonized in 2018.

In 2016, the Rothko Chapel hosted Archbishop Fiorenza, Rev. Lawson and the late-Rabbi Samuel Karff for a panel discussion on social justice and change.

Archbishop Fiorenza closed his invocation message by saying: “The Rothko Chapel in the heart of Houston invites all people to spend a quiet time reflecting on the importance of every person to making peace and tranquility common for human life in our community.”