An evening of solidarity for the Church in China 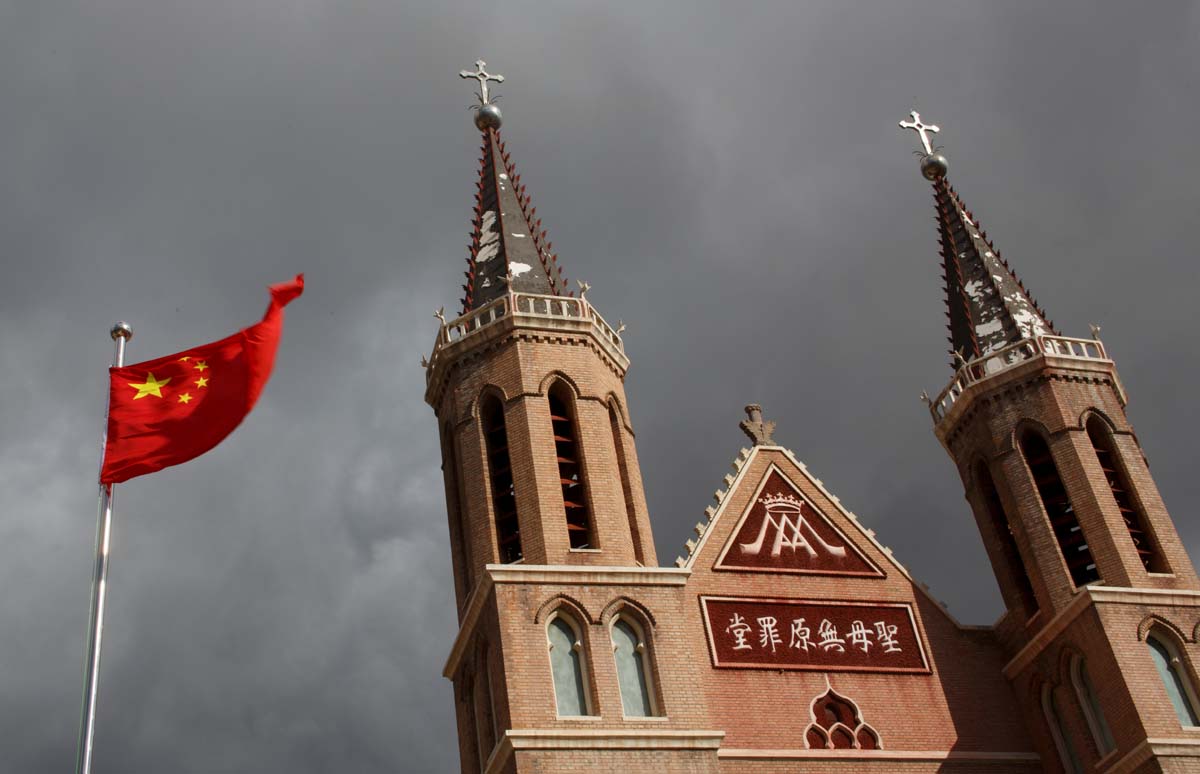 The Chinese national flag flies in front of a Catholic church in the village of Huangtugang, Hebei province, China, Sept. 30, 2018. The Spiritan China Education Fund helps the priests improve their awareness for the situation in the Church in China based on the education and experience that they have had in Houston. CNS photo.

HOUSTON — About 400 local faithful gathered at the second Father Matteo Ricci, SJ, Dinner at Ocean Palace Restaurant on March 5 to enjoy a night of Chinese culture and to support the mission of the Spiritan China Education Fund for Advanced Formation.

The dinner raises funds to support priests from China who want to pursue graduate study in Houston. The Spiritan China Education Fund helps the priests improve their awareness for the situation in the Church in China based on the education and experience that they have had in Houston.

Daniel Cardinal DiNardo, the recipient of 2017 Our Lady of China Award, gave the opening remarks.

“When (Chinese priests) return to China, they are empowered as social workers, teachers, administrators, and they become evangelizers for their culture… This (mission of the Fund) can only add to the mutual exchange that can bring enrichment to both here and to the Chinese, given the recent transformational change of relations between the Vatican and China… it’s important for us to host more priests from China,” he said.

Cardinal DiNardo discussed his recent meeting with Pope Francis where the latter showed him his favorite encyclical, “The Joy of the Gospel (Evangelii Gaudium),” in which the Pope speaks about a “spiritual desert.”

“I see this particular initiative and the Center for Faith and Culture at the University of St. Thomas as ways in which we clear the desert and start opening up faith and the local culture to each other in a booming relationship of truth and beauty,” the cardinal said.

Father Binh T. Quach, CSSp, Ph.D., the new director of the Reverend Donald Nesti Center for Faith and Culture at the University of St. Thomas, gave the keynote address.

Father Binh was the vicar general of Hsinchu Diocese, Taiwan, and served in mainland China for many years. He initiated the request to sponsor the first student, Father Yifu Lyu, from China to come to Houston. Earlier this year, Father Yifu received his master’s degree in Faith and Culture after three years of study in the Center at the University of St. Thomas. He has returned to his diocese to better evangelize.

Father Binh shared personal insight of his firsthand observations of a mentoring experience with a diocese in China. He reflected on State-Church relations, diocesan administration, formation of priests and sisters, empowerment of the laity, as well as the quality of pastoral ministry and discipleship.

The speech was lauded by many attendees, among whom was Bishop Curtis J. Guillory of the Beaumont Diocese, who said the presentation was informative, enriching, enlightening and necessary for the public to understand the Church in China. Bishop Guillory received the 2019 Our Lady of China Award, alongside Father Louis C. Zee, former pastor of Ascension Chinese Mission in Houston.

Sister Sharon Karam, RSCJ, and Sister Ann Caire, RSCJ, said that it was a wonderful evening and they congratulated the organizers for a informative and community-building program.

The Community Service Award was given to Bonna Kol, president of the Asia Society Texas Center. Our Lady of China Charity Award was presented to St. Martha Knights of Columbus Council #12320.

“We believe that these fine people represent the true spirit of service to God and the universal Church, especially those facing everyday challenges in China and Asia,” said Gordon and Sylvia Quan, honorary chairs of the event. “Their service and contribution carried the Gospel message of mercy, justice and peace.”

Referring to Father Yifu’s return to China, Professor Patrick Leung, chair of the China Education Fund, indicated that the first step in accomplishing the mission of the fund has been taken. He expressed deep appreciation to all whose combined efforts made this a reality: the Archdiocese of Galveston-Houston, especially St. Mary Seminary and Ascension Chinese Mission.

“We are working hard to bring the second priest student from China. Let Houston be ready. We will bring him here, no matter how difficult. We need your continued support to help cultivate other leaders for the Church in China, one at a time,” said Professor Leung.

Luke Liu, a board member of the China Education Fund, said, “sponsoring formation for Chinese priest and religious is perhaps the most practical and visionary way to lend your helping hand to the Church in China. I, myself, a sixth generation Chinese Catholic, admit that building support overseas is not easy, but it is an absolutely essential initiative. Through the ministry of Father Yifu, we hope to witness the fruit of our American collaboration with the grace of God in evangelizing the people of God in China.”

China today has about 10 to 15 million Catholics (1 percent of all Chinese population), whereas the Protestants about six times the size of the Catholic. Those who are interested in taking Church tours and connecting with the Church in China can refer to U.S. Catholic China Association at www.uscatholicchina.org.

To support the fund or for a presentation on the Church in China, contact Liu at Lukeliuhang@gmail.com.