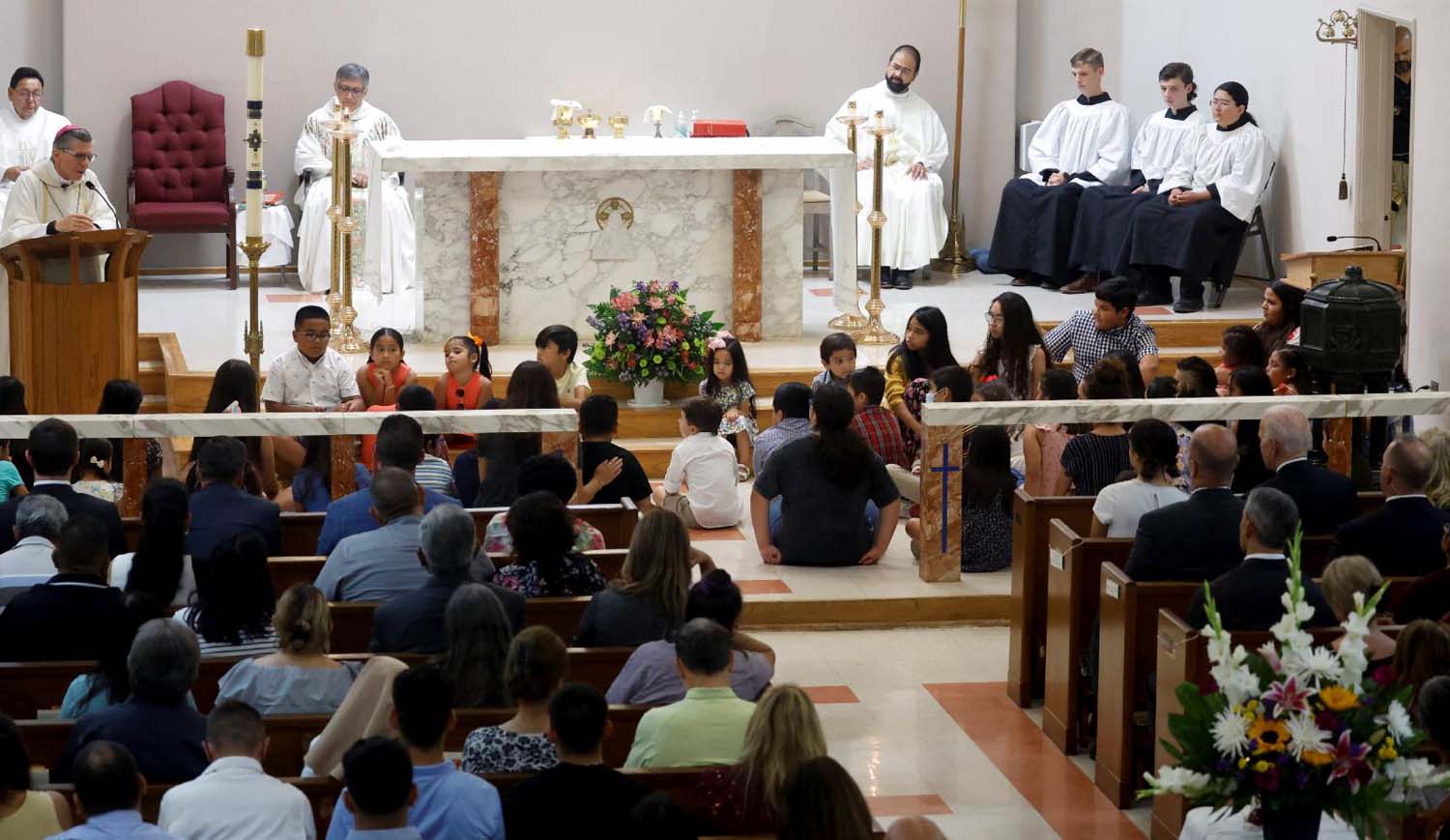 Children sit on the floor while listening to San Antonio Archbishop Gustavo García-Siller during Mass at Sacred Heart Catholic Church in Uvalde, Texas,  which was attended by President Joe Biden and first Lady Jill Biden May 29, 2022. A gunman killed 19 children and two teachers at Robb Elementary School May 24. (CNS photo/Jonathan Ernst, Reuters)

UVALDE (CNS) — It feels as if there are no silver linings in the cloud of lingering grief and horror that surrounds Uvalde, Texas, as the city began on May 31 to bury the first of 19 children and their two teachers killed a week earlier during a mass shooting at Robb Elementary School.

The killings have produced almost two dozen wakes, funeral Masses or church services, and burials over the past few weeks in the small city of 15,000.

But even in the grief and pain, Archbishop Gustavo García-Siller of San Antonio, who has tended to those grieving in Uvalde, said in his May 29 homily that he’s witnessed a lot of “goodness in people, in the midst of suffering and loss.”

And it is toward Jesus, His life and death, that all must look for comfort and guidance in this time of trial, the archbishop said.

“After he rises from the dead, Jesus does not return to take revenge on those who murdered or abandoned him. His first greeting to his disciples is: ‘Peace be with you,’” he said.

And if there’s a place that needs peace, it’s Uvalde, where questions, as well as indignation, linger about efforts made or not made to stop the shooter.

He urged all to keep focused on Jesus and His message.

“Thanks to Him, we are a people of life. He allows us to deeply embrace the pain as we go through it and enables us to comfort with hope those who mourn. He strengthens us in times of trial,” he said.

President Joe Biden and first lady Jill Biden also visited the same day and went to Mass at Sacred Heart Church, later meeting for three hours with the families of the dead.

“Do something!” someone in a crowd shouted at the president.

“It’s OK to be angry. But that anger can’t turn into hate,” the local pastor, Father Eduardo Morales, has been urging the local community during Mass. Father Morales would go on to celebrate several of the funeral Masses for those who died in the shooting.

Catholic priests, deacons, church staff, parishioners, and staff of schools and organizations continued to provide counseling, aid and others services to the families who lost loved ones and to others in Uvalde.

“God is good in the midst of the darkness,” said Father Matthew De Leon, who has been helping the Uvalde community. He is pastor of two parishes not far from Uvalde, St. Patrick’s in Sabinal, and St. Joseph’s in Knippa and at St. Mary’s in Vanderpool, an hour away.

On May 31, the feast of the Visitation of the Blessed Virgin Mary, parishioners of St. Martin de Porres Catholic Church in Barrett Station, just west of Houston near Crosby, held a Rosary prayer vigil.

The vigil prayed for the victims of the Uvalde shooting and the May 14 shooting in Buffalo, New York, where a gunman killed 10 Black people in a grocery store.

The prayer vigil was held at the parish’s Grotto of Our Lady and was coordinated by Deacon Steve Arceneaux, with parish pastor, Father Anthony Mbanefo, MSP, and Deacon Martin Lemond also in attendance.

Parish secretary Judy Richard created a prayer board that displayed the names of all the victims of both shootings to bring parishioners face to face with those who died. Before each decade of the Rosary, the names of the victims were announced.

Rosaries made by parishioners Mae McAllister and Patricia Reed were blessed and used in the prayer vigil.

The parish, which has roots as an African American parish, hosted the Rosary vigil in English and Spanish. A blessing from Father Mbanefo concluded the vigil.

Parishioners left with “a firm resolution to continue to pray for peace and for an end to gun violence in the country,” according to a parish official.

We pray for the repose of the souls of the women and children who died in the Uvalde tragedy, as well as for the comfort and healing of their loved ones:

A Prayer for the Dead

In your hands, O Lord, we humbly entrust our brothers and sisters. In this life you embraced them with your tender love; deliver them now from every evil and bid them eternal rest.

The old order has passed away: welcome them into paradise, where there will be no sorrow, no weeping or pain, but fullness of peace and joy with your Son and the Holy Spirit forever and ever. Amen.