Always ready, always faithful: WWII veteran’s service 75 years ago set her on a path to the Church 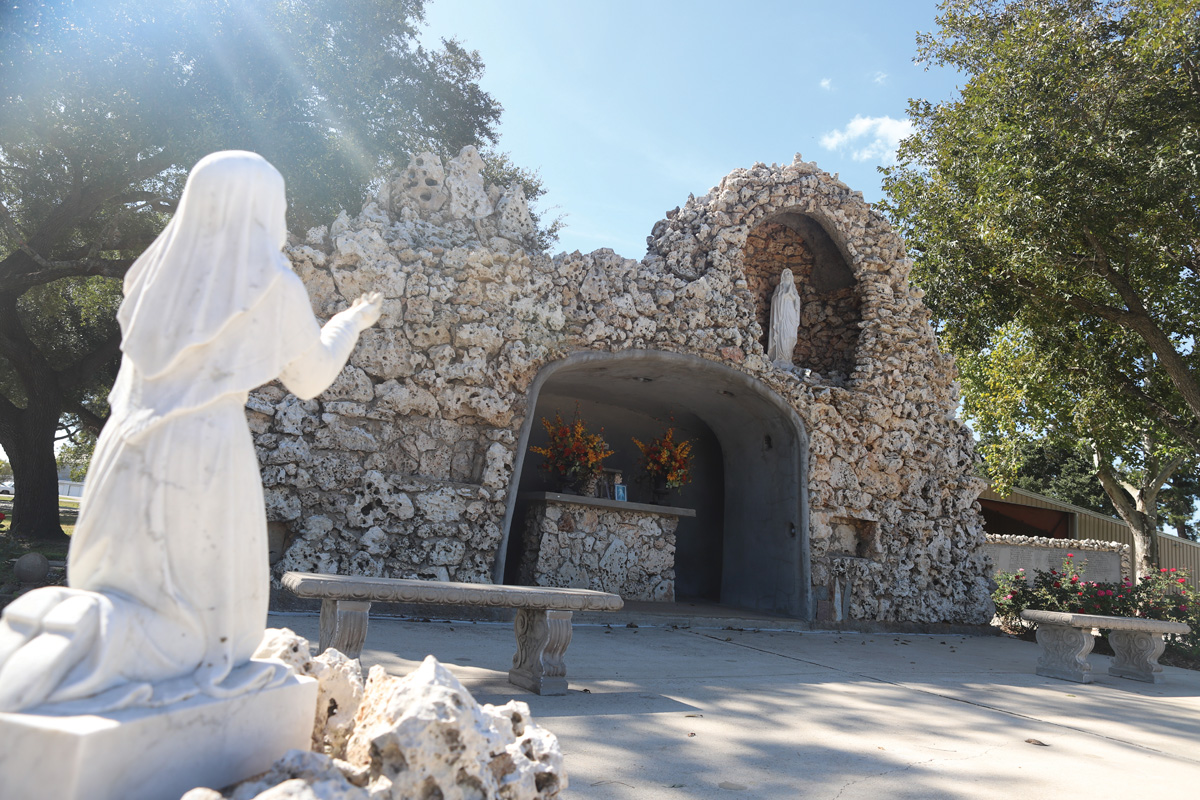 A grotto of Our Lady of Lourdes is seen at St. Mary Catholic Church in Frydek. The grotto was built in 1949 by Frydek parishioners in thanksgiving for the return of the ‘Frydek 65,’ a group of veterans who all safely returned home to Texas after World War II. A memorial wall, seen at right behind the grotto, lists the names of all 65 men. 2020 marked the 75th anniversary of the end of WWII. More than 16 million Americans, including Seaman First Class Shirley H. Reagor of Houston, served in the U.S. Armed Forces during a war that lasted from 1939 to 1945. The U.S. death toll was over 400,000. (Photo by James Ramos/Herald)

It was during World War II, and Americans had captured the submarine off the Atlantic Florida Coast. Once Italian sailors were sent to a Prisoner of War camp, Reagor’s job was to conduct an onboard inventory of the vessel.

As it turns out, she was among more than 11,000 women who served in the Women’s Coast Guard Reserves, known as SPARS, an acronym for “Semper Paratus – Always Ready.”

In November 1942, Congress established the acceptance of women into the reserve as commissioned officers and at the enlisted level. Its purpose was to make more men available to serve at sea by assigning women to onshore duties during the war, primarily in clerical roles, according to Britannica.

“I received training on the Coast Guard boats, learning the various positions, as well as operating and docking. But our roles were primarily administrative and logistical. Some women drove jeeps and folded parachutes,” she added. “The women played a critical behind-the-scenes role in the execution of missions, campaigns and national defense.”
Reagor joined the SPARS shortly after returning from New Jersey, where she said farewell to her brother and their local friends, who, as part of Patton’s Third Army, were about to embark on the North Africa and Sicily campaigns.

At that time, out of seven siblings, three brothers were actively serving in the military, and three others were working in defense plants.

Reagor knew that some would not come back and felt compelled to serve, which she did with her enlistment to the SPARS from 1943 to 1946. She was discharged as a First Class Seaman.

“She joined to defend her country and play an important role in the war effort,” said daughter Patricia Samsel. “She was proud and concerned about her family and wanted to do her patriotic duty.”

The benefits of military service during WWII far outweighed the challenges and risks, noted Samsel, who lives in Houston and Milan, Michigan, with her husband Jim. The couple provides care for Reagor, who recently turned 100 years old.

“Mom met and served with women from all over the country, becoming acquainted with different cultures and customs, nationalities and religions. She made lifelong friends. She acquired new administrative, inventory and organizational skills, as well as excelled in communications,” Samsel said. 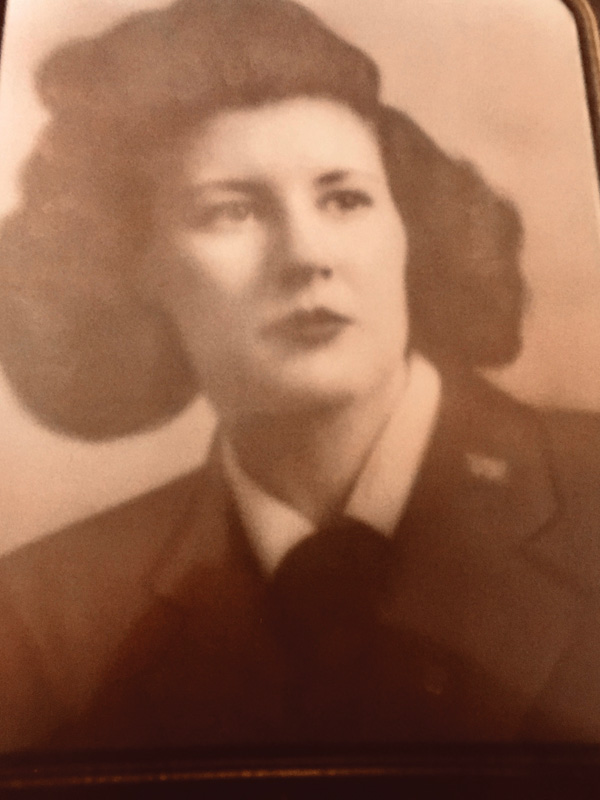 Prior to her military service, Reagor worked as a Rosie the Riveter at the Timiken Roller Bearing Factory in Akron-Canton, Ohio. She worked on producing bearings for war machinery. Thousands of women did the same as the men fought.

After the war, the SPARS, as well as other female military branches, were largely demobilized. Reagor, restricted from higher education because of money and gender issues of those sexist times, moved to New Orleans and worked as a medical secretary.

Since those days, Reagor has been recognized for her achievements and military duty.

Recently, Reagor received the Living Legend Award by the Women in Military Service for America (WIMSA). She wishes they would receive more funding and recognition.
For her 100th birthday this year, Reagor was thrilled when the U.S. Coast Guard Houston-Galveston Sector honored her with a boat drive-by, unit coins and a letter of appreciation from them and the Admiral of the Coast Guard. Houston Mayor Sylvester Turner also declared her birthday “her day.”

Over the past 100 years, Reagor has seen much in her lifetime — the emergence of technology and women’s expanded roles in the workforce and military.

“She is concerned that with the expansion, responsibilities and pressures have increased as women struggle to balance work-home issues while still receiving lower pay,” Samsel said.

“Secondly, she is amazed at the acceleration and integration of technology in everyday life, like family zoom sessions, FaceTime, virtual doctor appointments, and so forth. She has participated in all of these.”

Besides having her beautiful daughter, Reagor is most proud that she has a son currently serving as a priest. Father Scott Dugas is a Catholic priest and pastor of St. Joseph Catholic Church in Woodville, Mississippi. He also works with local veterans’ organizations in a chaplain’s capacity.

Born in Franklin, North Carolina, and initially raised as a Southern Baptist, Reagor has always been deeply involved in the Catholic Church in some form or another.
While living in New Orleans, she married her two children’s father, who was Catholic, and sent both children to Catholic schools for their spiritual and academic educations. They were both baptized and received Confirmation.

“Later, as my brother’s vocation evolved, she supported him and would visit his various parishes sharing her motherly wisdom. Her conversion happened over time as she observed us and so many other Catholic witnesses,” Samsel said.

In Houston, after the death of her second husband and with her grown children away, Reagor was impressed by the spiritual and emotional support she received from St. Cyril of Alexandria of Houston and its parish ministries.

Reagor officially converted to the Catholic faith five years ago at age 95.

“That was an amazing day,” said Beatriz Green. “I told her that she has been with us all of these years, likely knows more about the Catholic faith than anyone, but here you are just now joining the Church. She was even baptized by her son.”

Green, the youth minister and coordinator for Hispanic ministry at St. Cyril, met Reagor about six years ago.

Having heard about Reagor’s military service to her country, Green said she is truly impressed and believes the new convert is a true inspiration in more ways than one.
“She is an inspiration because back then it must have been pretty hard for a woman to be accepted among the ranks and among her peers,” Green said. “Women didn’t have it easy, but she went for what she was looking for, and nothing stopped her.”

Like many churchgoers impacted by COVID-19 and concerned with safety, Reagor now attends Mass through St. Cyril’s livestream as well other broadcasts.