‘All of heaven is with us’: All Souls Day Masses remember loved ones who passed into communion with God 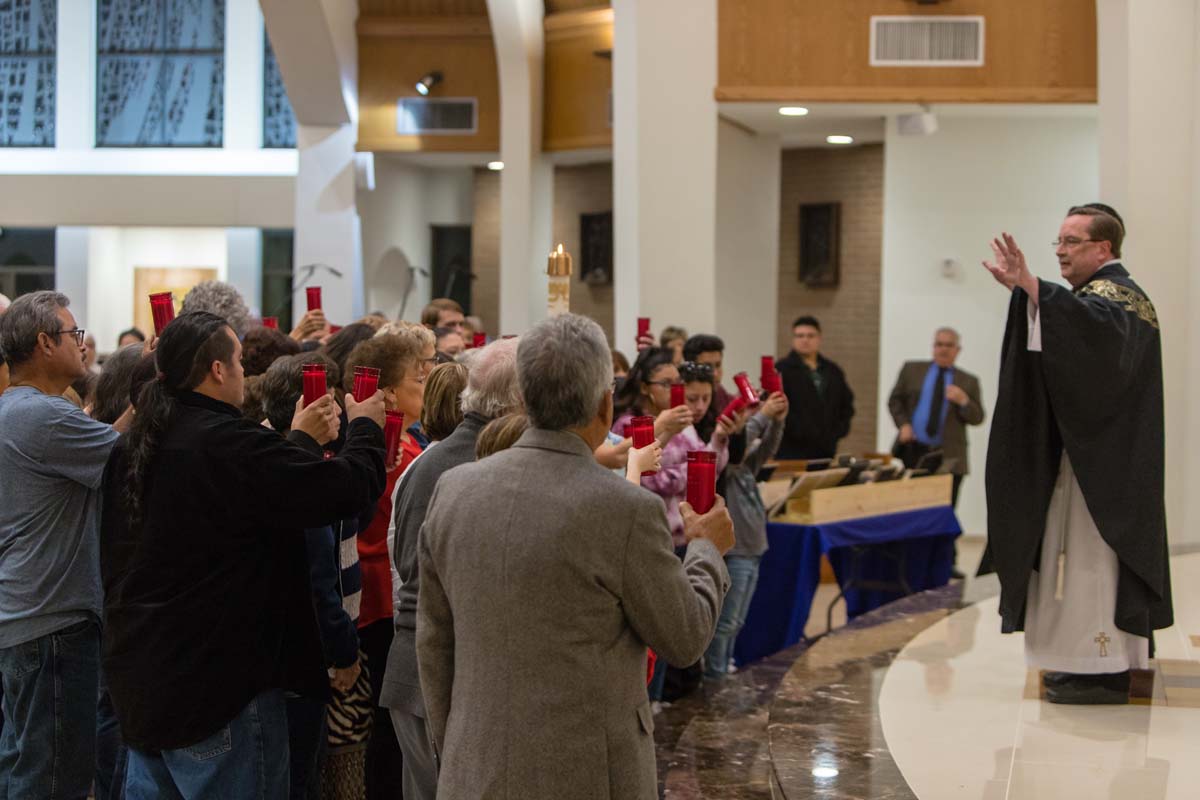 Father Larry Wilson blesses votive candles during an All Souls Day Mass at Shrine of the True Cross Catholic Church in Dickinson. Photo by James Ramos/Herald.

DICKINSON — A woman in a nursing uniform. A young man in his military garb. A doe-eyed couple on their wedding day. A young man sharply dressed for a senior photo. Father Larry Wilson sighed.

Staring at a table seemingly weighed down by these framed portraits of loved ones who have died, all placed by parishioners, Father Wilson bowed towards the images then he reverenced each one with a wave of the smoking thurible censer.

That night the Shrine of the True Cross parish pastor said he felt a mixture of sad, happy and confused. Celebrating a bilingual Mass for the Commemoration of All the Faithful Departed on All Souls Day Nov. 2 at his Dickinson parish, Father Wilson consoled aching hearts and souls, many yearning for loved ones who have died.

The celebration concluded a special series of Masses at Mount Olivet Cemetery and other Catholic cemeteries of the Archdiocese in Galveston, Houston and Dickinson that hosted several All Souls Day Masses with hundreds in attendance. Heavy rains left the fields of Mount Olivet drenched, prompting the evening Mass to be moved to True Cross instead.

During his homily, Father Wilson walked throughout the church, gazing lovingly at parishioners and visitors — many teary-eyed and perhaps still grieving — while sharing his own heart of sorrow and joy.

“Don’t you know that, right now, all of heaven is with us?” Father Wilson said. “Everyone we love, everyone that we’ve been separated from, is with us right now, in this church, during this Mass. Sitting alongside you. Praying for you. What love that God gives He allows us to be together with our loved ones that have passed from this life. Still connected, still joined, as part of the Body of Christ.”

Hardship in difficulty, loss and death hasn’t been a stranger to the Dickinson community. Many parishioners, as well as the parish, suffered devastating losses from Hurricane Harvey, where government figures estimate 80 percent of structures experienced flooding.

Urbina said the Mass was “very moving,” and that she could feel both her parents holding her. Just two years ago, she had been diagnosed with cancer and was now in her second year of remission.

And even though Harvey had taken away her apartment home, her husband’s job, and her parish church building, Urbina said, “I still have this mustard seed here [in my heart],” tapping her chest. “Harvey didn’t take it.”

She connected the All Souls Day Mass with the All Saints Day celebration hosted by students at the parochial school, where students dressed up as saints and told their stories as part of a living museum.

“I believe in all souls, and we are praying for them like the saints.”

The Dickinson community was also rocked by the Santa Fe High School shooting in May, with many parishioners with deep ties to nearby Santa Fe just eight miles away. Like the Shrine of the True Cross parish, the Mount Olivet offices and cemeteries were flooded by Harvey.

More than 100 people filled the chapel at the Mount Olivet Cemetery Mausoleum on a beautiful morning with blue skies and cool temperature to celebrate All Souls Day and remember loved ones who passed away.

Father Chacko Puthumayil in his homily said, “Let us pray for our deceased brothers and sisters. As communion reconciles us with God, so the saints in Heaven and the souls in purgatory are praising God in beautiful communion.”
Masses were also celebrated at Old Catholic Cemetery and Calvary Cemetery in Galveston and Holy Cross Cemetery in Houston.

Pope Francis, in celebrating an outdoor Mass Nov. 2 for All Souls in Rome’s Laurentino cemetery, said, “Memory reminds us that we are not alone. We are part of a people.”

Obviously, the feast day is more difficult for some people, including a weeping young couple the pope met before Mass when he visited the children’s section of the cemetery and the “Garden of Angels,” an adjoining section for the unborn; parents who have experienced a miscarriage can opt to have their children buried there rather than having a hospital dispose of the remains.

Pope Francis walked slowly between the small tombstones decorated with stuffed animals, pinwheels and balloons, and he left flowers on several of the graves. But, the pope said in his homily, the feast day is also “a day of hope,” and the day’s second reading from the Book of Revelation “describes what awaits us: a new heaven and a new earth.”

The image of the new, heavenly Jerusalem, he said, tells believers that “beauty awaits us.”

The feast of All Souls also includes a call to follow God’s path in order to live eternally with Him. That path, the pope said, is outlined in the Beatitudes in St. Matthew’s Gospel.

“These beatitudes — meekness, poverty in spirit, justice, mercy, pureness of heart — are lights that accompany us so that we do not take the wrong path,” the pope said.

St. Odilo of Cluny started All Souls Day in 998 A.D. when he decided to set aside Nov. 2 for the monasteries specifically to remember and pray for deceased monks who may have been going through the purification process in purgatory to be cleansed of sins.

Other cultures also celebrate similar remembrances such as the Mexican Dia de los Muertos, not necessarily Catholic-based, but where families visit the graves of loved ones and bring them gifts and create altars that contain favorite food and other items that the loved ones enjoyed in life.

Back in Dickinson at Shrine of the True Cross, Father Wilson encouraged Mass-goers to pray and be with those loved ones.

“Don’t be afraid of death, ever,” Father Wilson challenged them. “Some of us have lived long enough, we’re not afraid of anything ... I know the love of God. And I know that I’ve seen little glimpses of heaven. And I know it’s where we want to be one day.”