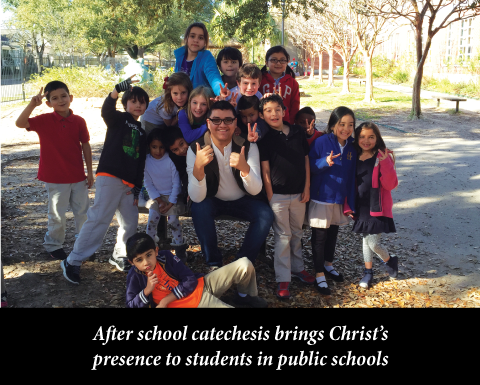 “Mr. Joseph’s Class” (led by Joseph Blanco) learn about following in the same footsteps of Jesus in the After School Catechesis in Public Schools program at Harvard Elementary School. Photo courtesy of Joseph Blanco.

HOUSTON — The mission of the Catholic Church is to “go out to teach all,” which in the Archdiocese includes evangelizing and catechizing children on school grounds after the last bell has rung.

“Presently, only 25 to 30 percent of our public-schooled Catholic children, ages six through 18, are in formation in any given year, which also correlates to those families who attend Sunday Mass,” said Dan Schwieterman, who has directed After School Catechesis in Public Schools for almost 25 years. “If we are to have these children recognize us as their Church, they need to experience us in their childhood through the Word of God. The same catechesis traditionally offered at the church now makes Christ Jesus present to others in the public school community — ‘His word is made flesh’ (John 1).”

Schwieterman said the efforts by the After School Catechesis in Public Schools ministry has resulted in a significant increase of families actively participating in parish catechesis, and even the Sunday Eucharist. In several parishes where this program has been in place consistently, the enrollment in catechesis has doubled, even tripled. Last year, three parishes in the Archdiocese participated in the after-school program with over 350 students registered. The families participating are members of All Saints Catholic Church, Immaculate Conception Catholic Church and St. Rose of Lima Catholic Church.

The Office of Evangelization and Catechesis (OEC) in the Archdiocese has supported and guided the After School Catechesis in Public Schools since 1993. The OEC is a ministry supported by the Diocesan Services Fund (DSF), which according to Julie Blevins, director of the OEC, assists the After School Catechesis in Public Schools in setting up parish programs in their community schools, which provides an opportunity to reach children and youth not in catechesis in churches. Blevins said this benefits parishes that may lack sufficient space for their catechetical needs and parents who cannot provide transportation from school to parish.

Schwieterman said the mission of the After School Catechesis in Public Schools not only forms the children participating, but also is a great cooperative effort with the school to offer an after-school enrichment program that is free to the families. He said this is important since the majority of students are from low income families struggling with learning, 90-percent Hispanic where often Spanish is first language. He said these students receive extra time reading, writing, discussing and learning while studying their Catholic values and faith, and at a time of day convenient for the families.

“In addition, the public schools permit and support this program as a part of their community service efforts; they gather the flock, provide the room, air, and lights, and clean up,” Schwieterman said. “There is no transportation or scheduling issues for the parents, because upon school dismissal, the students walk with the church group to the classrooms and parents pick them up afterward. Best of all, prayer and witness are done in the ‘open market place’ for all to see and not hidden away at the church.”

Joseph Blanco, Hispanic minister at All Saints Catholic Church and a catechist at Harvard Elementary for four years, said the ministry is able to provide the atmosphere of a fun after school program, but with the substance of learning about the Catholic faith and living out the Gospel. He has witnessed many young families reconnect to the Church since these parishes went out to the children.

“The kids I taught four years ago were so little and now they are in the fifth grade with another catechist, and are still wanting to know more about God and their faith, and are still eager and hungry to know the Good News,” Blanco said. “It gets me teary eyed, because I know I did my job right as a catechist and as a minister. That is the reason why I go every Friday, eager and ready for them as they are for me.”

Blanco believes that teaching after class in the public schools has been a big step for the Catholic Church, one with huge rewards.

“Some volunteers may say it is a lot of work, which it is, but the reward is seeing them learn who Jesus Christ is and asking their mom and dad if they can go to Mass,” Blanco said. “We are teaching this wonderful youth that not only Jesus is cool, but going to Mass is really cool as well.”