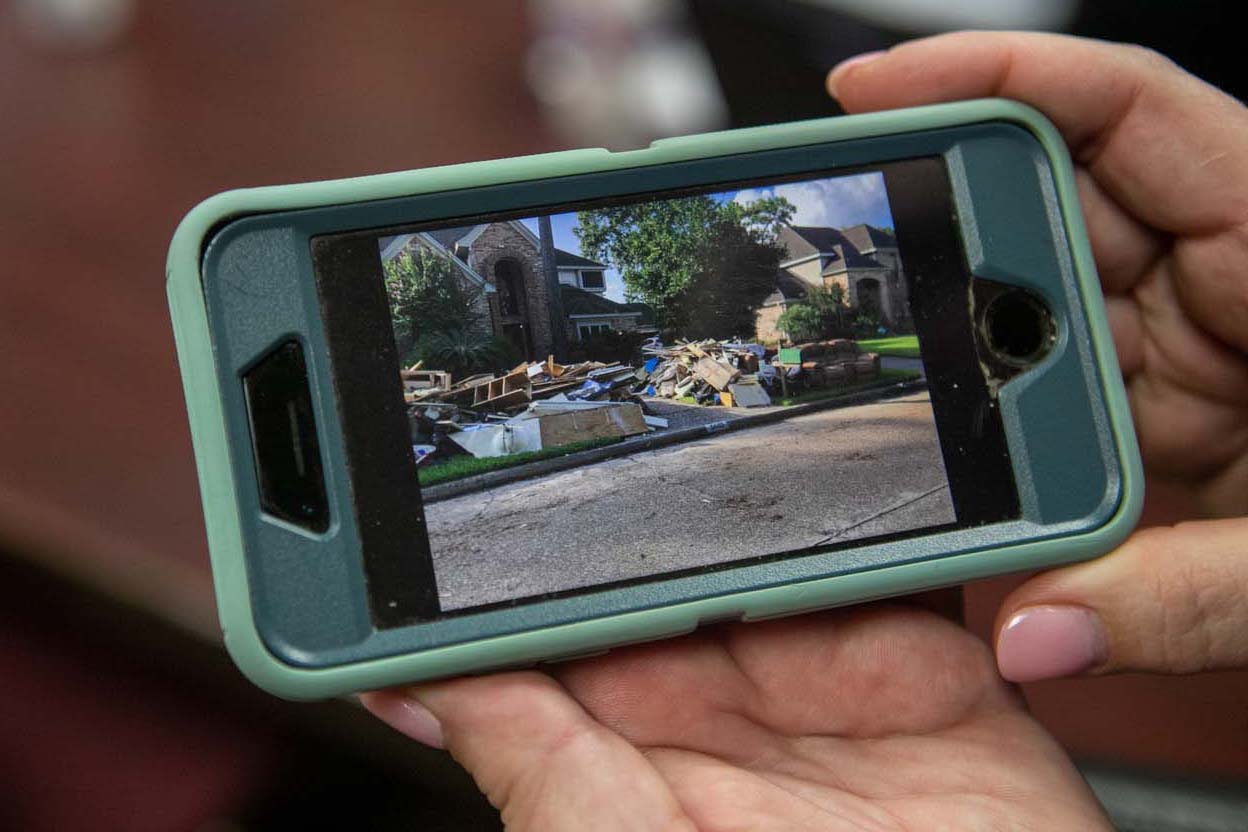 Michelle Pozzi's damaged house is seen in a photo. Her home flooded during Tropical Storm Imelda, which also flooded St. Martha Catholic School in Kingwood where she works as assistant principal. (Photo by James Ramos/Herald)

She said 7% of the student population was impacted by Imelda in some form, including Michelle Pozzi, St. Martha’s assistant principal, whose home took on eight inches of water.

During the recovery process, Pozzi said the “incredible” community that’s rallied around her was “a blessing when there are so many other things that do not seem a blessing at that time.”

Seventy volunteers, including parishioners and concerned strangers, came to her damaged home and cleared it out in just three days.

“When the water comes there’s nothing you can do,” Pozzi said. “All you can do is watch it. You’re very helpless.”
In his videos, Father Dolce beckoned for prayers, and empathized with those who flooded that day like Pozzi because he knew what that “helpless” feeling was like, watching how the “rain keeps coming and the waters keep rising.” The school had recently paid off the rebuilding from the May flood.

Still, he focused on the strength of God in the community: “God is with us,” Father Dolce said. “Always unshakable is the faith we have in the Lord and His love for us ... We’ve been through high waters before, we’re going to get through it again.” 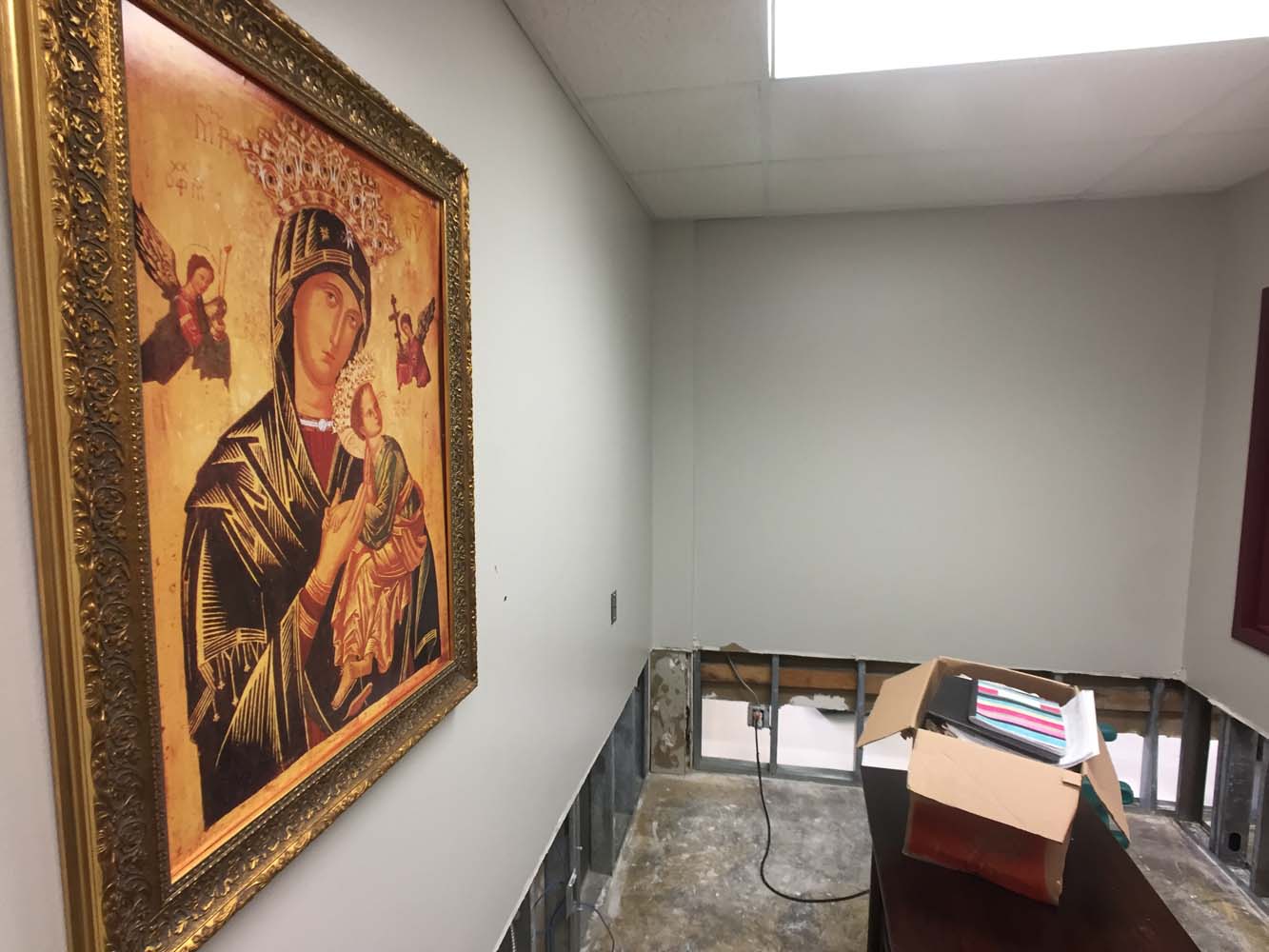 Father Dolce said the parish reactivated its disaster assistance services just as it did after Hurricane Harvey in 2017, and the last flood in May.

“We want to help as many people as we can,” he said.

Efforts to renovate the school buildings began immediately the next day. Faculty and staff quickly began moving supplies to other buildings so that class could resume, which it did Sept. 30.

While the first floors of the two school buildings remain under renovation, students returned to different classrooms and yet-again a new schedule.

“As a priest, you’re in intimate moments in people’s lives, in joy, and Baptisms, and weddings, and in pain, and funerals, and confession,” Father Dolce said. “But, you walk into people’s homes who have been flooded, and you realize just how much they’ve invested. The place that they feel like should be safe was violated by this nasty, gross water.”

He said the entire community has been praying and “holding each other up.”

“It’s very much [like] what heaven’s going to look like. Nothing else is really that important. What’s important is faith, and family, and friends, people that really love and care about us.”

Both Father Dolce and Munscher voiced frustrations with the situation, since it was just four months since they were last flooded during a May 2019 storm. They encouraged area voters to speak out for comprehensive flood mitigation efforts.

During the height of the storm, Jim “Mattress Mack” McIngvale, a parishioner at Assumption Catholic Church in Houston, opened one of his massive furniture stores to flood evacuees, just as he did during Harvey. He sent his own delivery trucks to assist with evacuations.

Catholic Charities of the Archdiocese of Galveston-Houston is serving flood victims via its Disaster Recovery Program. The program provides access to basic needs, food and disaster case management. Assistance programs are based out of several locations, including the Mamie George Community Center in Richmond, the Catholic Charities Guadalupe Center - Near Downtown Houston and Catholic Charities Beacon of Hope Center on Galveston Island.

The Society of St. Vincent de Paul is also working to provide aid, such as clothing, furniture and financial assistance via its 58 parish-based Societies throughout the Archdiocese and its overall efforts. The Vincentian Services Center, located at ​6654 Gulf Freeway in Houston, holds a food fair the first, third and fourth Saturday every month. The next three food fairs are held from 7 a.m. to 11:30 a.m. on Sept. 28, Oct. 5 and Oct. 19.

San José Clinic continues to provide quality healthcare for those in need. The clinic serves those who live within Harris County as well as surrounding counties, servicing more than 200 zip codes. Aid includes providing those in need of healthcare services and replacement prescriptions due to loss in the storm.

Deacon Phillip Jackson, director of the Archdiocesan Office of the Permanent Diaconate, said deacons throughout the Archdiocese were sent to shelters to provide pastoral care to flood evacuees.

Deacon Jackson said a deacon at a shelter met with a frustrated flood victim who had also flooded during Harvey.
“After a few minutes, they thanked the deacon saying, ‘I just needed to vent, thank you for listening!’”

Because of Harvey, the permanent diaconate program previously knew which deacons in the Archdiocese could provide pastoral care during emergencies like Imelda, he said.

“The primary ministry of the deacon is one of charity, so it only makes sense for the deacon to be sent into situations like these to listen, to pray and to ensure people that their voices are being heard,” Deacon Jackson said. “Our deacons responded quickly to the calls, and in many cases remained at the shelters for long periods of time during the day and into the evening and returning the next day to minister to the needs of those displaced by the storm.”

On Sept. 28, St. John Vianney Catholic Church in Houston sent teams of parishioners to northeast Houston to assist with clean-up and demolition efforts. In 2017, Harvey surrounded the parish with floodwaters after the Addicks and Barker reservoirs overflowed into their community.

"Many of our parishioners are still repairing and recovering, but in the wake of last week’s flooding from Tropical Storm Imelda, we are called upon to respond once more and to pay forward the assistance we received from so many outside of our parish," parish officials said.

They called for prayers for "patience and relief from the anxiety we all feel as we see this too familiar story unfold again."

Imelda made landfall near Freeport, Texas, with sustained 40-mph winds and gusts up to 47 mph. The storm moved slowly through Houston sagging south and then east, lashing Beaumont, Texas. After three days of rain, most falling in less than 24 hours, Imelda claimed five lives.

More than 65,000 were without power during the storm. Hundreds of homes were flooded and more than 2,100 high-water rescues and evacuations were made, civic officials said.

According to the National Weather Service, many of the same areas hardest hit by Harvey were again impacted by Imelda, primarily those in east Houston to Liberty, Chambers and Jefferson counties near Beaumont. When more than 43 inches of rain fell near Beaumont, the storm became the seventh wettest tropical cyclone in U.S. history, fourth wettest ever to hit Texas.