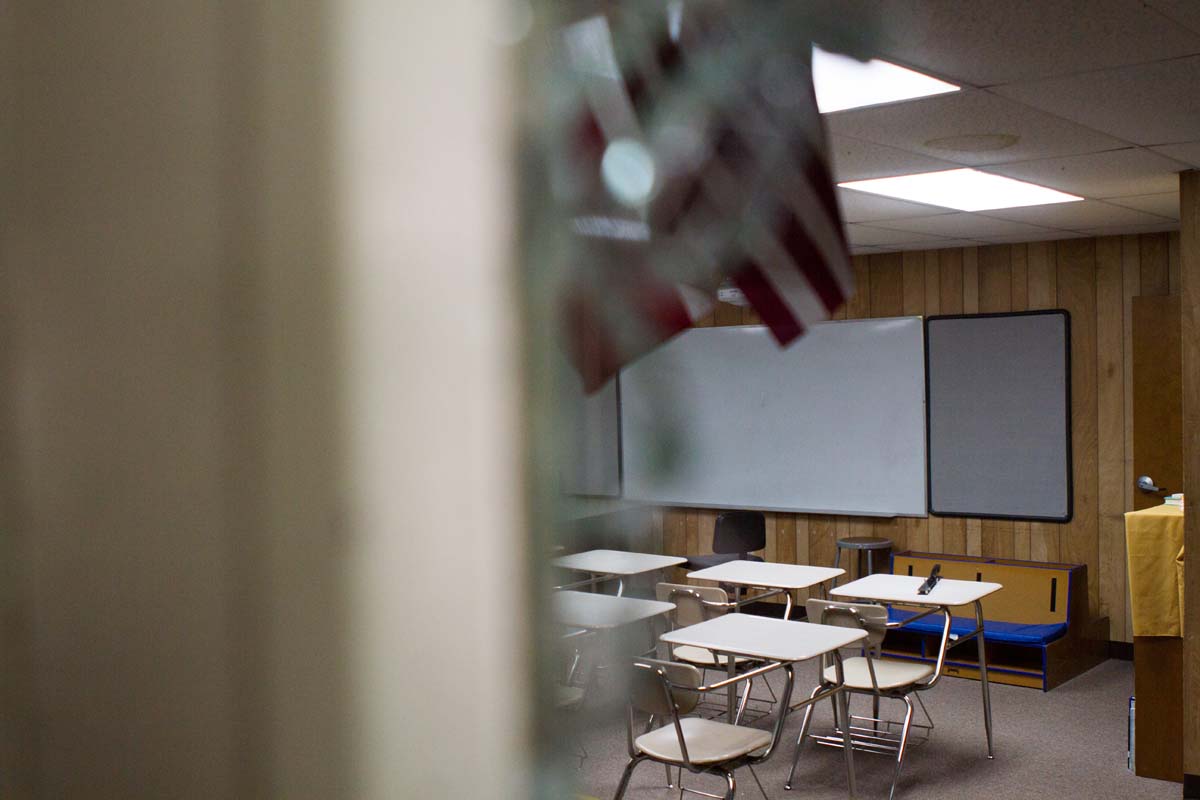 Desks are seen through a broken window at St. Francis of Assisi Catholic School in Houston Sept. 6. The school and parish suffered major damage from Hurricane Harvey, displacing students to a nearby Catholic school. Photos by James Ramos/Herald.

HOUSTON — The 22nd week in ordinary time of the church's liturgical year has been no ordinary time for Father Martin Eke, a Missionary of St. Paul, or his parish.

“Ever since the rain started... my life has never been busier,” the pastor of St. Francis of Assisi Catholic Church said Sept. 6.

The parish and school, which serves a vibrant African-American Catholic community in Northeast Houston, saw at least four feet of water. Hurricane Harvey’s record rainfall pushed nearby Hunting Bayou, which sits on the edge of the parish property, into the church campus and dozens of homes in the surrounding neighborhood.

As the storm inched through Houston, Father Eke kept vigil in prayer, watching the waters rise from his rectory window. A St. Francis of Assisi statue in a nearby prayer garden was his measure of the flood. As soon as the water reached the statue’s waist, Father Eke pushed through the water to the church and save what he could.

After the church’s lights went out, in darkness the priest waded to his rectory through rushing water for a flashlight, and then went back to the church save more property. But when he saw more water inside the church, he knew he had to leave. In less than an hour, the water had risen above Father Eke’s waist.

Even “the door (to exit) was difficult to open,” Father Eke said. “The water was rushing so fast,” flooding into the church. At that point, all he could do was wait out the storm in his home.

Then, “I could do nothing but pray,” he said. His rectory was “like a ship on a high sea.” In the end, the rectory was just one of two parish buildings that did not flood.

A few dozen yards away from the rectory, floodwater rushed into the St. Francis of Assisi Catholic School’s library, science lab, and gymnasium, where dozens of the school’s basketball team uniforms, sports equipment and treasured championship trophies became drenched in muddy water.

When the water eventually receded, parishioners came one-by-one to help salvage what they could. 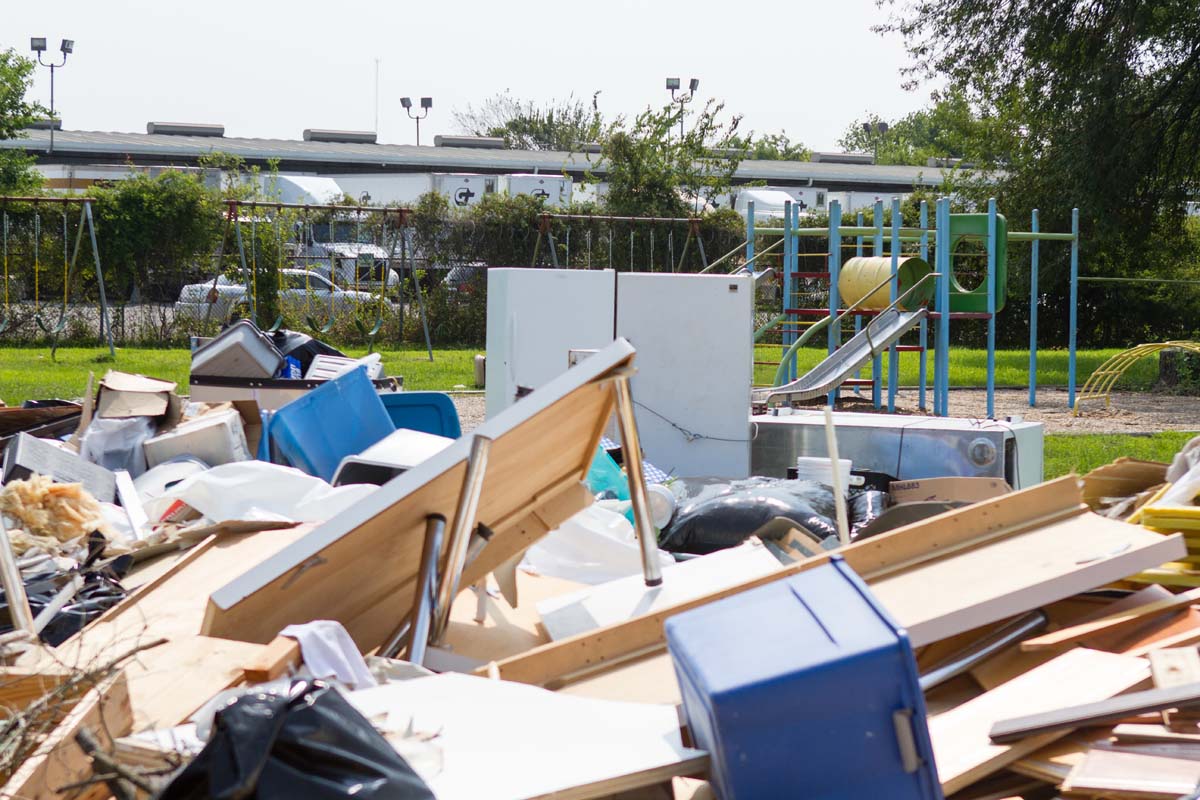 Damaged furniture and other debris sits next to the parish playground at St. Francis of Assisi Catholic Church and School.

It wasn’t until after the muck work – the exhausting process of cleaning and demolishing damaged property after floods – could Coach Ronald Berard, longtime volunteer basketball coach and parish acolyte, finally look at the gym’s damage more closely.

“No matter how much washing you do, I would never let my team wear uniforms that had been in so much mold,” Berard said, visibly stunned. “They’re a total loss.”

Almost hesitant to continue, he found his gym floors, installed only five years ago, in pieces. Water still pooled under the vinyl floors, as he navigated piles of P.E. equipment, chairs, and kitchen appliances inside the gym.

In the science lab, library and school office, the concrete walls survived most of the flood, but the floors and countless teaching equipment and resources did not. Broken glass showed where looters broke into nearby two classrooms during the storm. Next to the school playground outside, shelving, furniture and debris splayed out in the sun. After Harvey, the students were transferred to a nearby Catholic school to begin the school year, again. Most schools had just started classes, when Harvey’s floods interrupted hundreds of schools in the region for weeks.

In the parish office, formerly the convent for the Sisters of Charity of the Incarnate Word who helped found the school, a gaping hole in the ceiling showed where a leak turned into a torrent during the storm and water still bubbled up from beneath the floor tiles. Condemned, the offices were filled with mold that dripped down from walls, according to parish staff.

Alongside major recovery efforts, the parish still meets for regularly scheduled parish activities inside the St. Josephine Bakhita Center, a trailer high enough to avoid the flood. The Bakhita Center, which honors the African saint who survived slavery and became a religious sister, is now home to morning Mass and Adoration, choir room, parish prayer groups and the parish office.

Work crews made quick work across the parish grounds, a scene replicated tens of thousands of times across the Texas Gulf Coast. Inside the church, even with the cool breeze of Houston’s first cold front of the year moving through the sanctuary, Darwin Soares Jr. was still sweating. 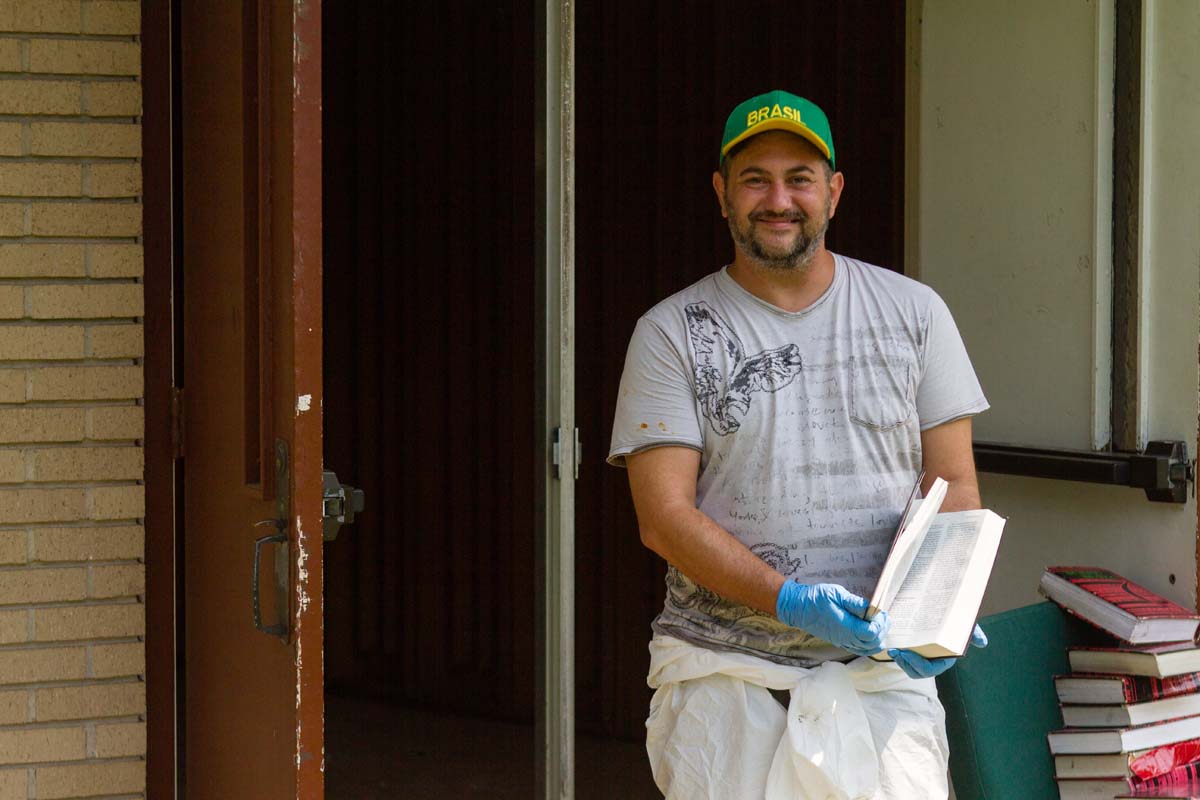 Darwin Soares Jr. holds a hymnal outside St. Francis of Assisi Catholic Church. He said coming to Houston was a blessing and that he's happy to help clean out the damaged church.

Soares filled his wheelbarrow with drywall debris, and went outside through a door propped open with a chair stacked high with wrinkled, still-moist hymnals and Bibles. Himself a Catholic, the 41-year-old Brazil native -- now living in Orlando, Florida -- spent much of his youth in Catholic churches. Raised and taught by missionary Catholic sisters in his home city of São Paulo, Brazil, Soares now found himself surrounded by a devastated, broken church.

“Coming here is a blessing,” Soares said, unknowingly answering God’s same call to St. Francis of Assisi to rebuild His church. “Some people come for money, but I come with my heart. I can work in hotels, houses, but a church? It's special. Even if I have to work for free, I will. When I saw what was happening (in Houston), I knew I had to come help.”

Soares continued to cut down drywall inside the church while Hurricane Irma, now a Category 5 storm, aimed for his home state of Florida.

Recalling his experiences as a priest of the Missionaries of St. Paul who celebrated outdoor Mass in Africa, Father Eke encouraged parishioners who could safely get to the parish to attend an outdoor Mass.

And to bring their own chairs.

“Bring your own chairs and I will bring the altar,” Father Eke said.

Then, where four feet of water once flowed, under the shade of a large tree outside the church building, the Mass was a sign of defiance in trial and hope for the weary parishioners, he said.

Later that week, Daniel Cardinal DiNardo would visit with the parish community and celebrate Mass at nearby Our Mother of Mercy Catholic Church. Cardinal DiNardo’s presence and words were a comfort to the community, Father Eke said.

Jeremiah’s lamentations, found in Sept. 3’s first reading, were all too real for the St. Francis of Assisi parish community. In Father Eke’s homily, he shared the same wonder many of his peers had: “Where was God during Harvey? We feel duped like Jeremiah.”

But still, he was “praying for the grace to take up my cross and follow Jesus.”

And with the same faith and courage that led him through Harvey’s waters to the church, Father Eke called his parish to do the same: “Here in the parish, we will not allow the fire burning in our hearts to be quenched by the flood water. It is such a time like this that genuine faith, love and generosity are put to test. Let no one walk away. Let no one be discouraged. This situation can only, temporarily, slow us down but will not stop us.”