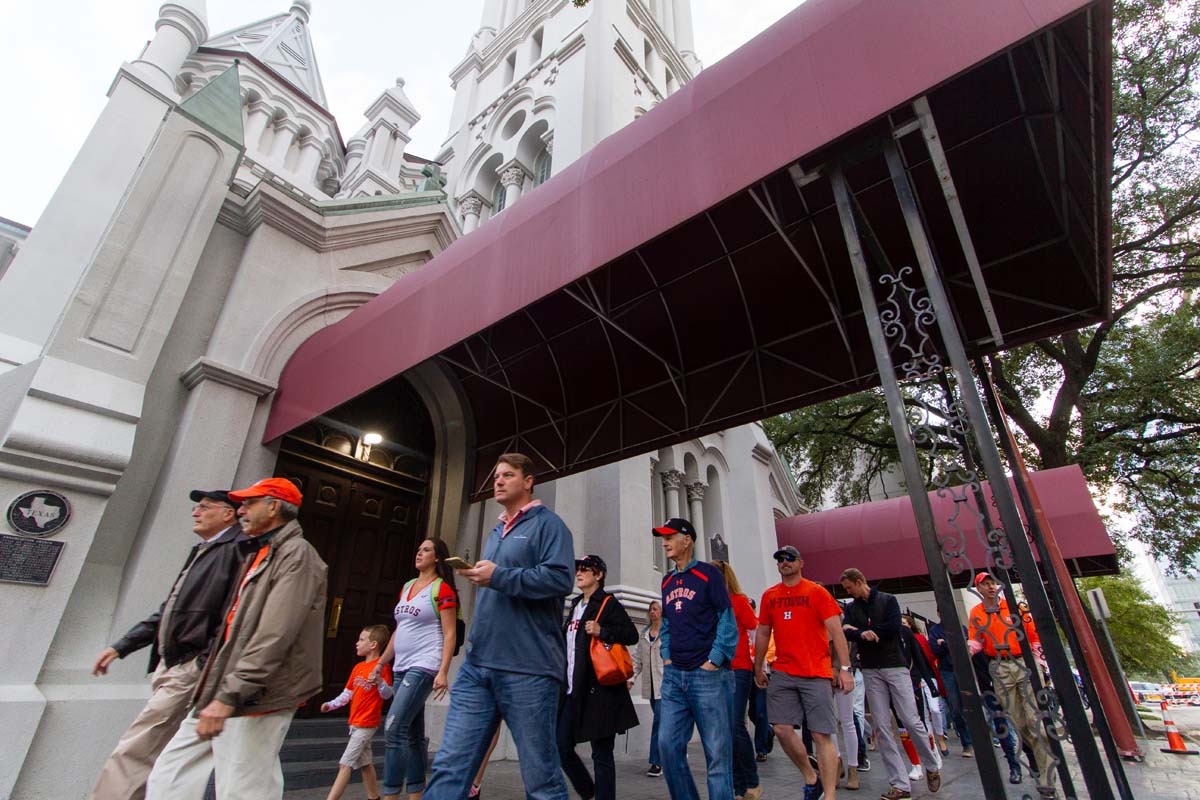 Baseball fans headed for Minute Maid Park walk by Annunciation Catholic Church which sits a baseball toss away from Minute Maid Park where the Houston Astros beat the Los Angeles Dodgers Oct. 27 during the 2017 World Series. Members of the 147 year-old parish were selling handmade rosaries to baseball fans throughout the weekend to raise funds for parish renovations. Photo by James Ramos/Herald.

HOUSTON — Baseball bats and rosary beads were the only thing on Tonya Killian’s mind as she walked toward Minute Maid Park for Game 3 of the 2017 World Series.

A longtime Houston Astros fan and parishioner at Mary Queen Catholic Church in Friendswood, Killian was on a mission to buy rosaries custom made for the World Series by members of Annunciation Catholic Church.

Her Hail Mary attempt was a success: She bought the last two handmade rosaries for sale that day, and maybe even an Astros World Series victory.

Tradition holds that if the parish — which sits close to the ballpark across the street — sells out of its rosaries on game day, the Astros will win.

No one really knows if Killian’s purchase guaranteed the Astros’ 5-3 victory over the Los Angeles Dodgers that Friday night, Oct. 27. But nobody could have expected the wild 13-12 Astros win two days later on Sunday night, even after Saturday’s loss. Game 5 saw the two teams slug it out for more than five hours and into extra innings Oct. 29.

PHOTOS: Baseballs and Rosaries: A historic Catholic Church and a legendary World Series

Going into Game 6 at Dodger Stadium Oct. 31, the Astros were leading 3 games to 2.

These rosaries were special to Killian, not just because they were Astros-colored. Killian’s family suffered during Hurricane Harvey: Two of her family members’ homes in Dickinson were flooded with more than 2 feet of water during the storm.

Now more than two months since the storm dropped more than 50 inches of rain along the Texas Gulf Coast, she said some of her family is able to finally return home. The rosary means a lot to her, she said.

“I’ve broken down more times in the last month and a half than in the last two years,” she told the Texas Catholic Herald, newspaper of the Archdiocese of Galveston-Houston. Dickinson was one of the hardest hit areas in Houston. “It’s cleaned up, but as you drive by, you can see straight through these homes.”

Still, Killian said the Astros’ World Series run has been thrilling to watch, something the city needed after Harvey’s devastation.

“To watch the Astros play, to me, is like watching kids doing what they love and having fun,” she said.

"To watch the Astros play, to me, is like watching kids doing what they love and having fun."

Father T.J. Dolce, archdiocesan vocations director, said the Astros’ World Series run has been a chance for the city to heal.

“The Astros playing in this World Series has been a chance for healing for our city. [It’s] a chance to remember that there is something bigger than ourselves, that we play for and represent, with Houston on the front of their jerseys, that thye’re playing for everybody,” he said. “And that ties to faith because we are one, we are a community.”

He found himself amidst the Astros mania downtown Saturday when he celebrated Mass at a wedding at Annunciation. He didn’t seem to mind though, since he’s also a longtime Astros fan and Catholic chaplain, celebrating Mass for the players and stadium staff regularly during the season with Catholic Athletes for Christ.

And while the MLB didn’t permit time for Mass during the World Series, the priest was able to get tickets to the electric Game 5 and offer prayers anyway.

“The swings, the roller coaster, the ups-and-downs... it was exhilarating,” Father Dolce said. “You become best friends with the people around you when you spend six hours at a baseball game. You high five during every single awesome thing and cry and lament together when things don’t go our way. For me, it was kind of a little bit of heaven on earth. For a moment, we were united together for something greater than ourselves. It was like the communion of saints that constantly surround us.”

For a moment, we were united together for something greater than ourselves. It was like the communion of saints that constantly surround us.”

The priest said the 43,300 in attendance were like a cloud of witnesses to that “amazing entertainment,” but that they “weren’t silent” but “electric.”

“But the communion of saints is always like that around us,” he said. “Surrounding us and praying for us and hoping we do well so that we can join together in the eternal banquet in heaven where there is joy, where there is no bickering or arguing about silly things, but coming together for something big, awesome and amazing.”

He later learned that Catholics who bought rosaries from Annunciation were praying those rosaries during Game 5 inside the stadium.

Parish staff and volunteers said the rosaries were in high demand, with 120 to 150 available during each of the three World Series games in Houston.

The line stretched down the block with a half hour wait just to enter the parish’s sidewalk pop-up gift shop.

Father Paul Felix, pastor of the 147-year-old parish, opened the doors to the historic church for all to visit Oct. 27. He beamed as visitors milled in and out. Inside, dozens stopped for a quiet moment of prayer before heading into the ballpark for the game.

Earlier that day, Lance McCullers, former MLB pitcher, lit a few candles inside the church for his son Lance McCullers Jr., a pitcher for the Astros. McCullers Jr. was crucial during the 2017 American League Championship against the New York Yankees and helped send the Astros to their second World Series.

Father Felix said the World Series was a prime time to evangelize the culture with the rosary, especially during the centennial of the Marian apparitions at Fatima.

His collar seemed to garner a double-take every few minutes or the occasional genial nod from the tens of thousands of baseball fans decked out in their team colors who streamed by the church.

Between blessing rosaries, Father Felix stopped to greet parishioners and the non-Catholics who have come to know him and his parishioners throughout the baseball season. The parish has been selling rosaries outside their front door all year long to help raise funds for parish renovations.

The church, designed by Nicholas J. Clayton, is the oldest surviving and continuously used church building in the Archdiocese of Galveston-Houston and is need of repair. Father Felix encouraged visitors to help recognize history and join the effort to help renovate the church.

Incarnate Word Academy, founded in 1873 by the Sisters of the Incarnate Word and Blessed Sacrament, adjacent to the church also celebrated the Astros’ World Series run with sidewalk art that welcomed baseball fans.

The sisters are longtime fans of the Astros, especially after the team left the Astrodome and moved downtown in 2000 across the street.

Soon it was time to close up shop and as the volunteers began to clean up, the 6 p.m. Angelus bell rang loudly hundreds of feet above. Everyone stopped what they were doing to pray together.

Then, not seconds after the closing Glory Be, a nearby patient but faithful fan yelled out a question: “Did y’all sell out!?”

Happy to confirm, the volunteers said “Yes!” The Orange-clad fan cheered and headed for the stadium to tell others the good news.

The World Series continues as the Dodgers return to Los Angeles to host the Astros Oct. 31.

Click here for more information about Annunciation Catholic Church. The parish is taking orders for custom handmade Rosaries at capitalcampaign@annunciationcc.org.