After giving up so much last year, what’s left to ‘give up’ for Lent? 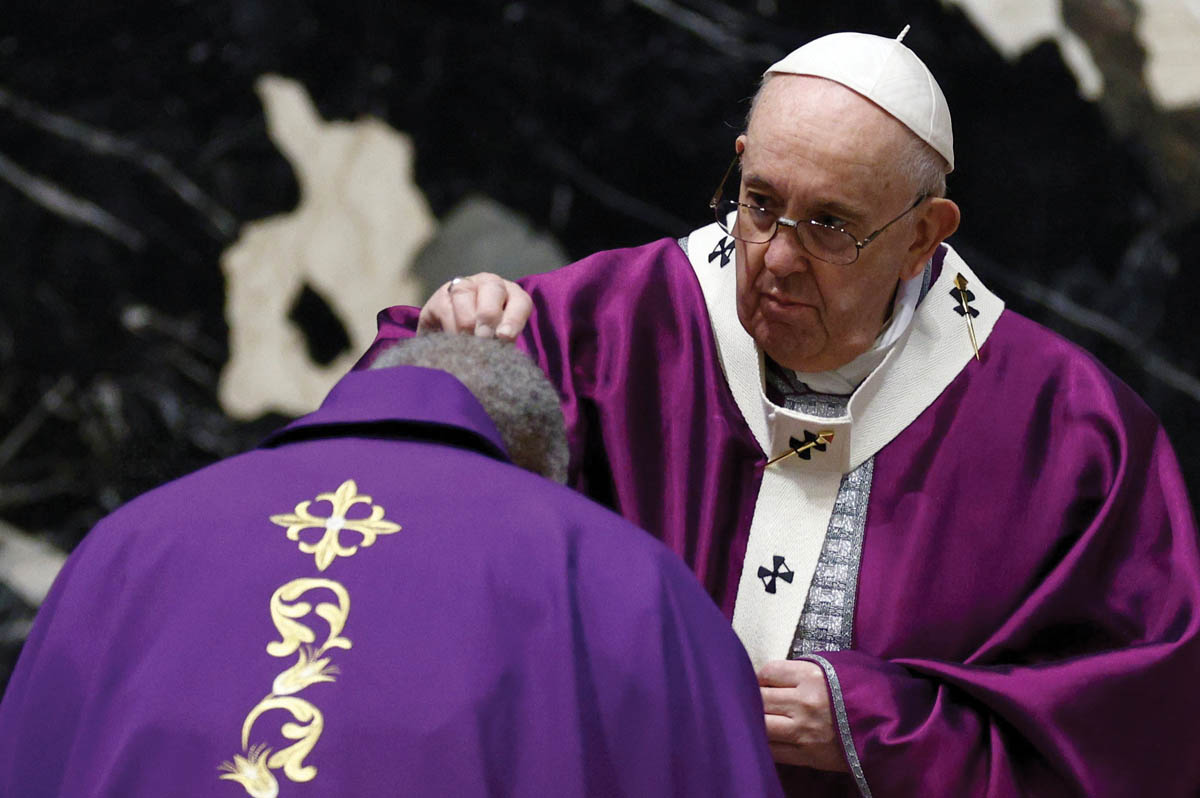 Pope Francis sprinkles ashes on the head of a cardinal during Ash Wednesday Mass in St. Peter’s Basilica at the Vatican Feb. 17. (CNS photo)

HOUSTON (CNS) — Since childhood, the typical U.S. Catholic’s response to Lent is giving up, as in “What are you giving up for Lent?”

If you haven’t been keeping track, Catholics in the U.S. and worldwide — just about everyone, really — have been giving up a lot since the coronavirus pandemic struck 11 months ago, with no clearly defined end in sight.

You would need the fingers on both hands to name some of the things that have been lost, not to mention nearly a half-million lives lost in the U.S. alone.

So, given all that, how should a Catholic approach Lent this year?

“Our spiritual journeys should not just be seen as the place where we take ‘stuff’ from ourselves but instead a place of growth and added graces that God has planned for us,” he said. “Adding new habits and prayer can be a gift we give ourselves this Lent.”

Father Halepeska said in the chaos of family and daily life, “we can give ourselves moments of silence to encounter our God who loves us. I hope that all take time to receive from the abundance that God has in store for us all.”

Father Pat Garrett, pastor of Sts. Simon and Jude Catholic Church in The Woodlands, said he’s been focused on making a “sacrifice of time” and take time to do something more, primarily daily prayer.

“With all the frustration and anxiety [right now], we can easily develop bad habits of anger and impatience in our interactions with those we are closest to,” he said. “It is important to do a daily examination of conscience and call on the Holy Spirit who brings love, joy and peace in our life.”

Some examples of the sacrifice of time, Father Garrett said, include attending daily Mass in-person or virtually, praying the Rosary daily, doing a Bible study, and participating the Stations of the Cross (either in person or virtually).

Timothy Colbert, director of the Office of Adolescent Catechesis and Evangelization, said Lent calls the Church to three things: almsgiving, prayer and fasting.

“The common practice of giving something up is connected with fasting; doing without as a way of sacrifice that helps us remember Christ’s sacrifice,” he said. “Rather than focusing on additional fasting, I would challenge young people to be more attentive to their prayer life this Lent.”

Pope: God invites us to return to Him

In his Feb. 17 Ash Wednesday Mass homily, Pope Francis said Lent is a time to reconsider the path one is taking in life and to finally answer God’s invitation to return to Him with one’s whole heart.

Because of ongoing pandemic measures, the Mass and distribution of ashes took place with a congregation of around 100 people at the Altar of the Chair in St. Peter’s Basilica.
In St. Peter’s Basilica, the pope received ashes on his head from Angelo Cardinal Comastri, archpriest of the basilica, and he distributed ashes to about three dozen cardinals, as well as the priests and deacons assisting him at the Mass.

In his homily, the pope said one must bow to receive ashes sprinkled on the head, which reflects the “humble descent” one makes in reflecting on one’s life, sins and relationship with God.

“Lent is a journey of return to God,” especially when most people live each day ignoring or delaying their response to God’s invitation to pray and do something for others.

“It is a time to reconsider the path we are taking, to find the route that leads us home and to rediscover our profound relationship with God, on whom everything depends,” he said.

“The journey of Lent is an exodus from slavery to freedom,” he said, noting the easy temptations along that journey, including yearning for the past, or hindered by “unhealthy attachments, held back by the seductive snares of our sins, by the false security of money and appearances, by the paralysis of our discontents.

He said it is in life’s most painful wounds, that God awaits with His infinite mercy because that’s “where we are most vulnerable, where we feel the most shame” and where He comes to meet His children again.

“And now,” the pope said, “He invites us to return to Him, to rediscover the joy of being loved.”