After fire and flood, Our Lady Star of the Sea parish shines again 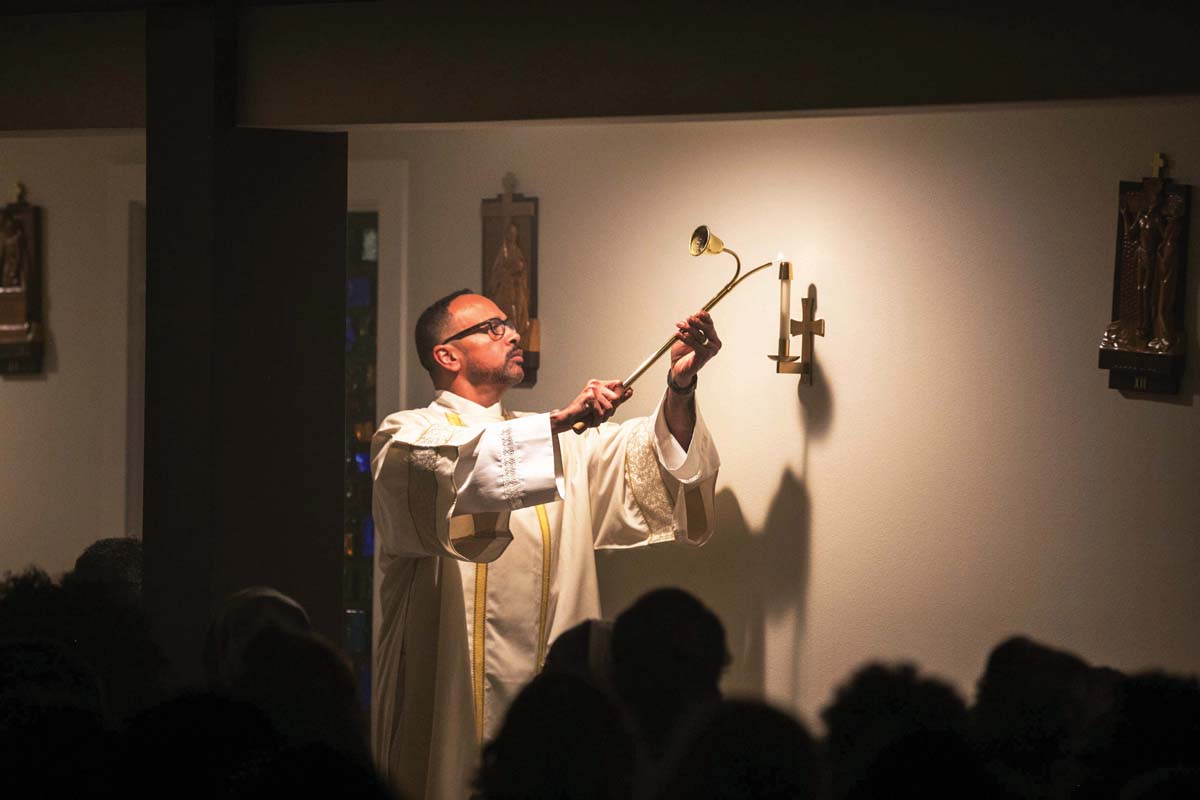 A deacon lights a candle on a wall of Our Lady Star of the Sea Catholic Church in Houston during its rededication Mass March 1.. Parishioners returned to their church sanctuary after it had suffered major damages from Hurricane Harvey and an electrical fire. Photo by James Ramos/Herald.

HOUSTON — Daniel Cardinal DiNardo joined hundreds of parishioners in rejoicing over the return of Our Lady Star of the Sea Catholic Church in Houston. A Mass of Rededication filled with deep symbolism, ritual and meaning was celebrated to commemorate the parish’s newly renovated church sanctuary. Cardinal DiNardo was the chief celebrant of the Mass, with parish pastor, Father Stephen Sohe, S.S.J., and nearly a dozen other priests concelebrating.

Walking through the pews of the church during his homily, Cardinal DiNardo encouraged parishioners to see their new church as a spiritual home that enables them to be “living stones” that bring Christ to others in the community.

The parish suffered major damage after an electrical fire broke out Jan. 28, 2018 inside the church sanctuary, which burned 50 percent of the church and damaged 100 percent with smoke, officials said.

Smoke charred major portions of the sanctuary, painting walls around the altar black with soot. An image of the Divine Mercy Jesus still remained bright the day after the fire, despite being surrounded by smoke damage. The cry room and sacristy were completely burnt, while the sanctuary and nave of the church were heavily damaged by high heat and smoke, Archdiocesan officials said.

The parish had already experienced flooding the year prior when Hurricane Harvey devastated the Texas Gulf Coast in August 2017. The parish hall, rectory and church building saw a foot of Harvey’s floodwater, according to Archdiocesan officials. These damages, coupled with the fire, forced a majority of the sanctuary to be replaced, including the altar area, statues, music equipment and baptismal font.

The tightknit community of 300-plus families remained committed to having Mass on the church grounds, and soon gathered for Mass in the parish hall.

Longtime parishioner Linda Lewis said she could barely sleep the night before the rededication Mass. While she wasn’t directly affected by Harvey’s flooding, her spiritual home at Our Lady Star of the Sea was damaged by the storm, and then fire. Still, even with such anxiety and excitement, she had been ready for the Mass and was deeply moved by it.

The entirety of the Mass — the symbols, the lights and songs, the incense and the altar — drew her more deeply into worship, she said. Seeing Cardinal DiNardo dedicate the altar with chrism, the lights finally illuminating the renovated church; all of the ritual helped Lewis realize “Jesus is in our church now,” she said.

“It was just a calm spirit,” she said. “There’s a spirit in here that’s just amazing. It really is. I just feel it here. Now I can sleep tonight. I am so blessed and I am so glad, I know everybody else is glad too, especially our priest.”

Father Sohe began leading the parish only weeks after Harvey. Still, Lewis said his energy and passion for the Church is inspiring.

The Mass of Rededication includes several prayers and rituals that bring specific meaning and blessings to the church building.

A few include a blessing and sprinkling of holy water throughout the church, reminding parishioners of their Baptism, as wells as purifying the church walls and altar. Cardinal DiNardo presented the Lectionary to the readers of the Word, encouraging them to proclaim the Gospel to all.

Cardinal DiNardo offered a prayer of dedication, one that declares the will of the people to offer the altar and church to God alone. The church walls and altar are also anointed with holy chrism, with ministers rubbing the oils into the walls as Cardinal poured the chrism over the altar, consecrating it. Deacons serving at the parish then incensed the church, symbolizing the community’s prayers rising to the Lord. Finally, prior to the Liturgy of the Eucharist, the church and altar — which had been cloaked in darkness — are illuminated in bright light.

Founded in 1949, the parish serves the Fidelity, Galena Park and Clifton Park communities. Our Lady Star of the Sea may be well-known for hosting popular events like its crawfish festival, bazaar and zydeco gatherings, but the parish that began as a mission also has a resilience that isn’t a stranger to celebrating the faith in shifting locations.

In the 1950s, catechism classes were taught under the shade of trees before moving to facilities loaned by Galena Park ISD, then to homes of parishioners, and eventually to parish buildings.

The first Masses of the community were held in a nearby community theater. Leaders with the Knights and Ladies of St. Peter Claver spearheaded efforts to build up the faith life of parishioners and those in the surrounding communities. The parish has been led by the Josephite Fathers since 1948.

The parishioners, with Father Sohe and staff, have worked  hard to assist with rebuilding the parish from the ashes that remained after the fire, Archdiocesan officials said.

Today, their spiritual home now exists to serve as a faithful place of evangelization where parishioners can gather to pray in the presence of the Blessed Sacrament with renewed faith and vigor.