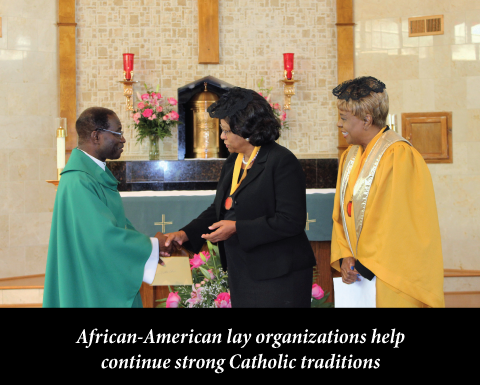 HOUSTON — November celebrates the contributions African-American Catholics have made to the Catholic faith throughout history.
Deacon Leonard Lockett, vicar for Catholics of African Descent, said that an integral part of his ministry is the help and support of lay associations.

“These lay associations are vital to our Apostolate and to my ministry,” he said. “In my capacity as vicar for Catholics of African Descent, I have come to depend greatly on these organizations for their assistance in the planning and execution of various conferences, workshops and the Reverend Dr. King annual Archdiocesan’s celebration.”

The inspiration and history of these organizations goes back several centuries. In February 1891, St. Katharine Drexel, listening to desires God placed in her heart, professed vows of poverty, chastity and obedience, and became the first Sister of the Blessed Sacrament (SBS). Her work and dedication inspired several lay organizations.

The Drexel Society is a lay service organization founded in memory and emulation of her. Elise LeNoir Morris, a native of DeRidder, Louisiana, and a graduate of Xavier High School (Prep) and Xavier University, came to know, admire and respect St. Katharine Drexel while attending those schools. This devotion led to the founding of the society on Oct. 14, 1978, chartering the first chapter in Houston on Dec. 1, 1981. On Dec. 30, 1983, national status was attained through the establishment of a chapter in Los Angeles, California. Chapters in Louisiana and Alabama soon followed.

The members of this organization are Catholic women who render service to the Church and humanity by observing the motto “Service, Love, Dedication, Sacrifice, and Devotion.” Its objectives address educational, spiritual, cultural and welfare issues relating to women and children. That includes service to God and to their fellow humans through charitable works and religious devotion; to foster opportunities for women of common interest to address issues and concerns related to these issues; to formulate positions and to seek positive action in relation to these position; and to provide opportunities for women to advance themselves educationally, secularly and spiritually.

Also inspired by St. Katharine Drexel was the Associates of the Sisters of the Blessed Sacrament (ASBS). During an SBS assembly in 1990 the organization approved of forming an Associate group. In 1992 the first Associates made their commitment to live the charism of St. Katharine and the vision and values of the Sisters of the Blessed Sacrament. That same year units at the Motherhouse, in New Orleans and in Los Angeles were commissioned. Today there are 19 ASBS units. The ASBS are now spread across the United States and Haiti.

The Associates, made up of Catholic married and single women and men, commit themselves, as do SBS, to live out and witness to the values, spirituality and mission entrusted to St. Katharine Drexel. This involves praying with and for the sisters, Scripture study, adoration of the Blessed Sacrament, and such works as visiting the sick and tutoring. The ASBS do not live in the SBS communities, and although some Associates may work or volunteer to serve in parishes or schools where SBS minister, there is no obligation to do so. Associates often give witness to promoting justice and works of service where SBS are unable to minister.

Another source of inspiration for the lay associations is the Venerable Henriette Delille, who set aside the life expected of her as a free Black woman in the 1840s to live for God. Many Black women in Louisiana in the 19th Century, including her family members, had suffered through the system of placage. By accepting the life of a mistress of a wealthy land or slave owner, some Black women obtained for themselves and their children a measure of protection and even wealth.

Venerable Delille emphatically rejected participating in this form of slavery. Venerable Delille was a devout Catholic — one who worked fervently for the conversion of slaves (Blacks) in New Orleans and devoted herself to God. She started an order for women of mixed African descent in New Orleans. On Oct. 15, 1852, Venerable Delille pronounced her vows with Juliette Gaudin and Josephine Charles in St. Augustine Church. Initially called the Congregation of the Sisters of the Presentation of the Blessed Virgin Mary from 1836 to 1841. community became the Sisters of the Holy Family, a religious community for Black women, after acceptance of the order by the Church in 1842.

To help the little religious community to become incorporated, a group of free men and women of color allied themselves with the nuns and formed the Association of the Holy Family. Henriette Delille was chosen president and with other outstanding free people of color the sisters found the moral support needed for their work to grow. In 1997, the Associates of the Sisters of the Holy Family was reorganized in the spirit of the Canon Laws 299-306 and the Second Vatican Council. An Associate is a Roman Catholic man or woman who enters into a temporary covenant relationship with the congregation for the purpose of sharing in the prayer life, ministry and charism of Venerable Delille. Hence, the Associates are offered an opportunity to deepen their relationship with God and to respond to their baptismal call to participate in the mission of the Church by sharing in the lie, spirit and mission of the Sisters of the Holy Family. Today, the organization is active is Texas, Louisiana, California and Belize.
Another organization of Associates is the Associate Missionaries of St. Paul (AMSP). The Missionary Society of St. Paul (MSP) began as an idea in the mind of its founder, Dominic Cardinal Ekandem in Nigeria. He first conceived the idea in 1950, but it took about 27 years for it to be established when The Catholic Bishop Conference of Nigeria finally made the decision at its meeting in September 1976. The society which began as an act of faith and trust in God, has grown into a large missionary family, boasting 251 priest members and four deacons as of January 2016.

The AMSP are Catholic men and women, married and single, who desire association with the MSP as a means of spiritual growth; are ready to be involved in the work of God through prayers, financial and moral support to the clergy; willingly offer their support and bring nearer to the laity the awareness that they can work and serve God well without being ordained priests; and work in unity to answer the call of Christ for all to become one by sharing the apostolate/ministry of the MSP. The Associate missionaries benefit from opportunities to pray with the MSP at Masses, prayer services and are invited to special MSP celebrations. Associates are remembered daily in the prayers of the MSP and are offered Mass every Friday by the MSP and are encouraged to promote the charism and the mission of the order.

Deacon Lockett said he is grateful for the prayers, work and assistance all these organizations offer to his ministry.

“In light of the Black Apostolate these organizations are a ‘light on the hill’ on what it means to be a true disciple of Jesus of Nazareth,” he said. “However, these organizations also serve their brothers and sisters outside the Apostolate in their neighboring communities through food and clothing drive throughout the year. Countless numbers of individuals in and outside our faith tradition have been blessed through the mission and ministry of these lay organizations and it is my prayer Almighty God continue to give them the strength and faith to continue their worthy cause.”