Adjusting evangelization to the current culture 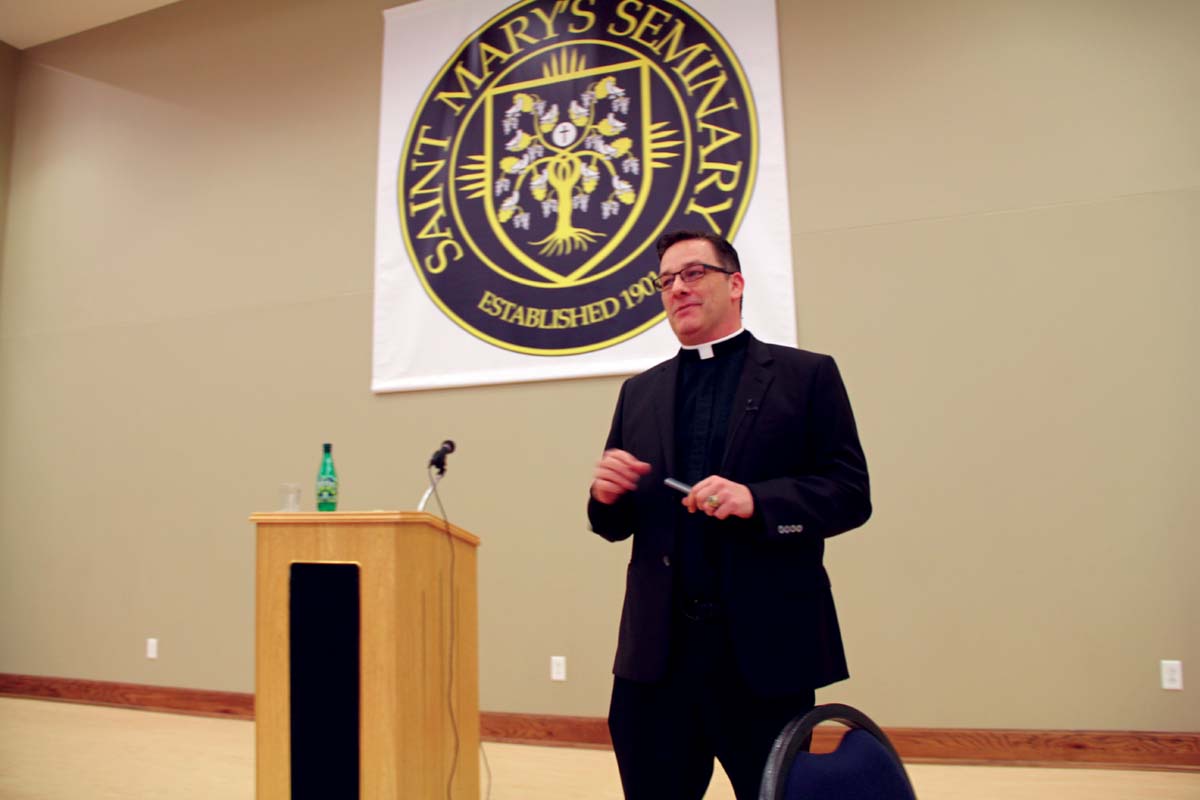 Father Sean Kilcawley, diocesan director of the Office of Family Life Lincoln, Nebraska speaks during a workshop focused on the vices of pornography as a growing addiction in society on Feb. 13 at St. Mary’s Seminary. At least 250 attended, including Archdiocesan clergy, school staff, youth ministers and lay ministers. Photo by Rebecca Torrellas/Herald.

HOUSTON — Father Sean Kilcawley, diocesan director of the Office of Family Life for the Diocese of Lincoln in Nebraska, said that because of the hypersexualized culture in which kids are being raised, the average age of exposure to hard core pornography is now between 8 and 11 years old.

Father Kilcawley spoke about love, the theology of love and the understanding of love in marriage, family and relationships during a presentation titled “Pornography: How to Handle This Reality in My Ministry and My Family” at St. Mary’s Seminary, Feb. 13. About 250 attended the workshop, organized by the Office of Young Adult and Campus Ministry of the Archdiocese. There were many goals of the workshop, including to help heal relationships and assist parents in preventing and responding to pornography exposure that can be devastating.

As attendees focus on protecting children from effects of pornography, Father Kilcawley said that it is important to understand the Church’s evangelizing mission.

“We’re not talking about a special ministry that we need to start for a few core bad people, but rather adjust our evangelization to the culture we live in,” he said. “Our families are the places where we learn to love.’

Father Kilcawley said “the whole world changed” in 2009 to 2013. “In 2009 the biggest distraction in my high school classroom was kids texting during class. They’d put their hand in their pocket and feel the buttons on their phone and send a message... In 2013 they can’t do that anymore because they all have phones with screens, but all those screens have videos, and all those videos have access to high-speed, high-definition pornography. So, how do I teach the truth, beauty and goodness of God’s plan for love if they’re consuming the anti-message at a faster rate than I can teach them? How do we do that?”

Father Kilcawley also spoke about the challenge of dating in modern culture with apps like Tinder, Instagram and Snapchat that distort youth’s views on what relationships should be.

“Fourteen is the age where most people start sexting,” he said. “Social media platforms are really designed to move kids out of supervision.”

Father Kilcawley stressed that conversations about pornography need to take place. Just teaching youth to be virtuous is not enough.

“Until we start to say things like ‘you know Jesus loves you even though you are a sinner’... we’re not preaching the Gospel into that space,” he said. “Young people in general don’t believe that God loves them in a unique, exclusive way.”
Adrian Herrera, associate director with the Archdiocesan Office of Evangelization and Catechesis, said, “I think his workshop helped me to grow in self-knowledge on the potential damage pornography can do, in addition that is also a clergy man from the perspective of the Church who is speaking about pornography no longer as taboo but a reality that is affecting families, young children and the way we do ministry nowadays.”

Dunn Estacio, associate director with the Archdiocesan Office of Adolescent Catechesis and Evangelization, said Father Kilcawley was a very well-rounded speaker because he was able to pull in psychology, stats, theology and even personal witness all in one presentation.

“His view and perspective on his ministry was refreshing,” he said.

Father Kilcawley is director for “Integrity Restored,” a program providing education, training, encouragement and resources to break free from pornography. On his website, he talks about the understandable fear of addressing pornography from the pulpit and helps guide the need for pastoral courage and preventing any shock to the innocent.

Father Kilcawley will return to Houston July 30 to close this year’s Café Catholica, which will be held at St. Michael Catholic Church.