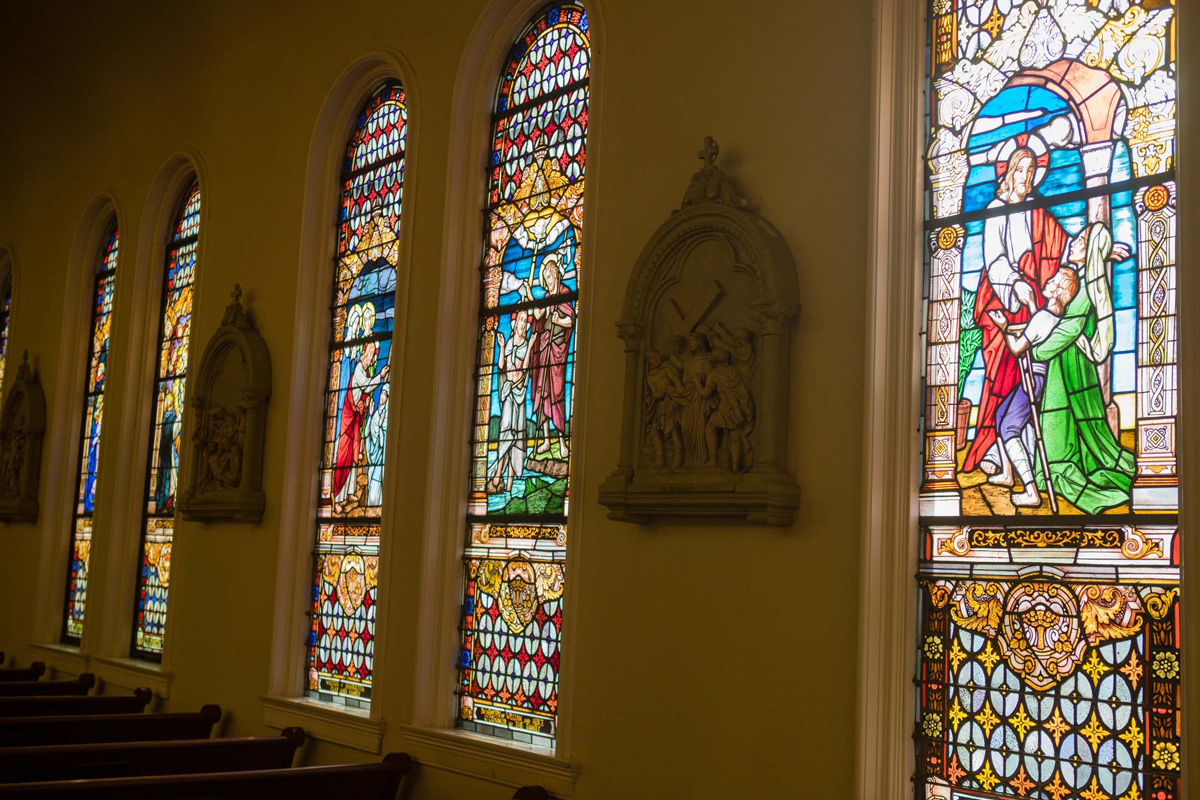 HOUSTON — The second oldest Catholic Church in Houston is getting a stained-glass window facelift.

To be exact, there are 22 of the colorful, artistic windows being refurbished at St. Joseph Catholic Church, and more financial sponsors for windows are still needed to complete the project.

“We decided that if a family sponsored each window, then each sponsor would receive a plaque,” said Father Victor Perez of St. Joseph. “In order to recognize the donations, each plaque would read, ‘Restored in memory of …,’ and that would help us raise money to complete all 22 windows.”

Currently, the stained-glass windows have names of original donors sketched into glass panes. To keep those names intact, new sponsors of the refurbishing project get the plaque that hangs nearby.

Isabella Marie Kubiak was the youngest of nine grandchildren. Born with a defect, her heart’s left side was not developed.

In March 2016, precious Isabella passed at the age of nearly 5.

Her short time on earth brought joy to her family and those around her, said grandparents Dennis and Birdie Kubiak of Houston.

Isabella’s parents are Brian (the couple’s son) and Celina Kubiak.

“Isabella is praying for us now in the company of the angels and the saints,” Birdie Kubiak said.

“She is our littlest saint in heaven and wants us to know how much she loves us,” Kubiak added. “Her spirit lives forever through our memories and in our hearts.”

Now, her memory will also shine through the bright, colorful, refurbished stained-glass window that depicts St. Dominic kneeling in front of Mary as she holds the baby Jesus. The image depicts Mary presenting St. Dominic, the patron saint of astronomers, with a Rosary of beads.

“I picked that window to sponsor because I kept getting strong urges like it was speaking to me,” Birdie said. “I kept asking Isabella which one we should sponsor, and that particular one is the one I was drawn towards.”

The message of the window, the Kubiaks said, is strong. It presents a Rosary, which represents all people who should trust in God, have hope and keep the faith, even during difficult times.

“I believe that Isabella chose this window to further deliver the message of God’s love for all of us,” Birdie said.

Sponsorships are $4,800 for each window. Out of the total 22 windows, 14 of them have been claimed, Father Perez said. That leaves eight more windows without a financial sponsor.

Potential sponsors can select a particular window if they choose. All are beautifully decorated with images from the different mysteries of the Rosary or the life of St. Joseph.
Sponsorships do not have to be paid upfront.

“Parishioners can pledge the $4,800, and by the time the window is completed, then the money has to be paid in full,” said Anahi Gonzalez, business manager with the church.
“Some families get together to honor their parents or family name,” Gonzalez said. “The more family members, the easier it gets to cover the amount.”

The project started in November 2019 after church leaders realized the windows were becoming increasingly fragile, even with broken pieces.

“We were worried about the cracks we were seeing, and they were just so warped,” Father Perez said.

“These windows even survived a fire in 1995 during which the roof of the church was destroyed,” he added. “But it is time for them to be refurbished, so we are having experts take them apart, clean them, repair the cracks and install all new lead strips between the glass panes.”

The very first St. Joseph church sanctuary was destroyed in the great hurricane of 1900, windows and all.

The present-day Romanesque Revival structure of St. Joseph, designed by Patrick S. Rabbit and built in 1901, actually had other windows. But the current stained-glass windows, considered the first truly artistic windows at the church, were installed in 1915. German company Franz Meyer created them.

A Pasadena company, Creation Art Glass & Design, is responsible for the repairs.

“They completed the first two windows to make sure it looked good,” Gonzalez said. “Once the company finished, we knew they met all of the criteria and that we could proceed.”

It has been over a year since the project began. Progress was slightly slowed down by the impact of COVID-19. Yet, Father Perez and Gonzalez remain optimistic that the windows will be completed – and paid for by sponsors.

“These windows are important to the historical value of this building,” Gonzalez said.

“All of these stained-glass windows add beauty to this church,” Father Perez added. “They are one of our main attractions. When people walk inside, everyone makes comments about them.”

So far, five windows have been completely refurbished. Each window takes around six weeks to be finished.

“Some windows take longer due to the number of cracks or if there are missing pieces that need to be replaced, besides just cleaning and putting it together,” said Gonzalez said.

This is not the only refurbishing project St. Joseph is undertaking at the moment. The church is also in the process of updating its church bell, which was removed following the 1995 fire that also damaged the bell tower.

“Once we repair that, it will include an automatic striker so we can hear the bell strike again,” Father Perez said.

Meanwhile, Father Perez hopes people continue to worship at St. Joseph, located at 1505 Kane St. in Houston. This year marks the parish Jubilee Year in honor of the 150th anniversary since St. Joseph was declared Patron of the Universal Church. Celebrations run through March 24, 2021.

The church parish is also celebrating its 140th anniversary since being founded in 1880.