Accompanying young adults in their discernment and discovery of vocational life 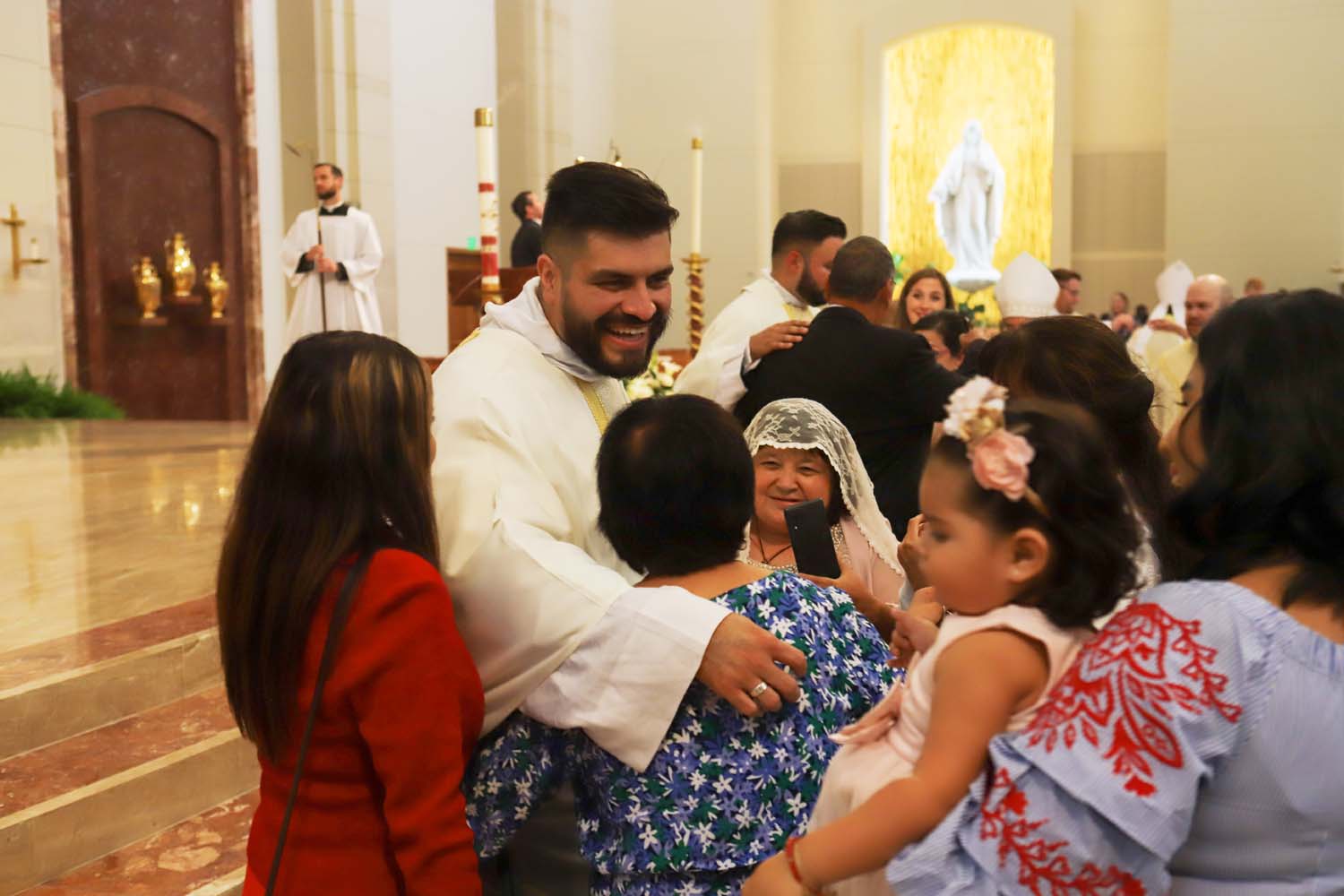 Father Luis Garcia embraces family members after his Mass of Ordination on June 4. The Office of Vocations is tasked with walking with people of all ages in discovering their vocational call. (Photo by James Ramos/Herald)

HOUSTON — As young people mature, grow and go out into the whole world to experience life on their own, they will naturally begin searching for answers to life’s most basic and profound question — knowing and understanding God’s will and purpose for their lives. The Church plays an instrumental role in accompanying and encouraging these young adults along the way as they set off to discern and discover their vocational call.

Because more workers are desperately needed “in the vineyard” to continue spreading the word of Christ, one of the most essential tasks of the Church has always been to encourage and support young men and women discerning the call to the priesthood and religious life.

Fostering vocations in parishes and Catholic schools formally became the responsibility of the Office of Vocations in the Archdiocese in 1963, when Bishop John Morkovsky appointed Father William Steele as the first full-time vocations director. Before that time, various priests, including those at St. Mary’s Seminary, acted as unofficial vocations directors. This meant most of the vocations’ responsibilities fell upon the clergy, religious, and/or catechetical lay leaders in parishes and Catholic junior high and high schools without an organized, concerted effort.

The Office of Vocations, currently with its ninth director, Father Richard McNeillie, since 2018, continues to carry out the good works that began over six decades ago by his predecessors. He and his staff have a vision for every young person in the Archdiocese to prayerfully discern and joyfully discover their lifelong vocation. The ministry offers discernment groups, Mass and Eucharistic Adoration, prayer services and groups, and various retreats to assist young adults with this process.

A young adult involved with the Office of Vocations, Laura Hoffman, said she found the ministry’s spiritual growth and formation opportunities to be encouraging and influential in her decision-making process as she pursued God’s call for her life. This included attending Samuel Group, a program for young adults ages 19 to 30, who meet once a month for six months to study, pray and discover their individual vocations or lifetime call from God. The Office of Vocations started a group for women in 2019 for young adults in the Archdiocese and later expanded the program to include a group for men in 2021.

Hoffman first attended Samuel Group offered at Texas A&M University at the beginning of her senior year when she felt overwhelmed with the next step in her life. She wanted to be a missionary but knew she could not afford to pay for her student loans on a fundraised salary.

“After various closed doors, I felt lost and unsure, but the Samuel Group program in college and later in Galveston-Houston gave me the tools to discern the next step in my life and every step since,” said Hoffman. “While I did not become a missionary, I am now a public-school teacher, and my mission field is filled with people who need to hear the good news of Christ proclaimed to their wandering hearts.”

As a volunteer, Hoffman finds fulfillment in serving others through Samuel Group for the first time while also being reformed in the content. She feels God gives her greater graces to receive the material and live out true discernment in her daily life.

“At the first session of Samuel Group last year, I presented on living a life of virtue and the movement toward greater freedom in Christ,” said Hoffman. “In preparing for this session, I was convinced by the centrality of growth in virtue and freedom in daily life because if our hearts are not free and directed towards God, we cannot really hear Him, much less obey Him.”

She said after the Office of Vocations asked her to discern applying to the Cenacle of Our Lady of Divine Providence School of Spiritual Direction. After having attended her first year of school, she believes the Lord is inviting her to walk with others who are learning to discern the voice of the Lord in their lives.

Father McNeillie believes Samuel Group is critical to helping form young people in the faith as much as vocational discernment to the priesthood, religious, married or single life.

“We don’t presume what their vocation is, and we don’t even expect them all to be priests and nuns,” said Father McNeillie. “It’s a program that can help a young person really grow in virtue so that they will be ready to live their vocation when God finally reveals it.”

As one of 64 ministries supported by DSF (Diocesan Services Fund), Father McNeillie said the Office of Vocations is able to continue offering several of its programs and services for young adults like Hoffman. An example is covering the $200 program fee for Samuel Group, which makes it more affordable for young adults, especially those in college.

“We continue to serve young people who are thinking about their vocation, and if we didn’t have the support of the people of God, through their prayers and financial contributions like the DSF, I don’t think we would have many priests at all,” said Father McNeillie. “You just wouldn’t have Mass every day, maybe not even every week.”

Hoffman agrees that supporting the Office of Vocations and its staff through the DSF is important since they are the formators of the Church. She believes the graces of the ministry are not just for those who receive formation but for the whole church for years to come.

“The formation opportunities provided through the Vocations Office are instrumental in my life as well as the lives of countless others,” said Hoffman. “Discernment is not constrained to a season of life, but it is a lifelong practice of continual conversion. In this turbulent world we live in, the need for discernment in all things is evident, and the Ignatian rules of discernment are applicable in everyday life as well as in the extraordinary decisions made in vocational discernment.”

For more information, visit the Office of Vocation’s website at houstonvocations.com or call 713-652-8239. To learn more about DSF, go to archgh.org/dsf.

The DSF supports 64 ministries, whether direct service or education, which require this critical funding to remain in operation. Out of each gift given to DSF, 100% of every dollar goes directly to supporting these ministries.