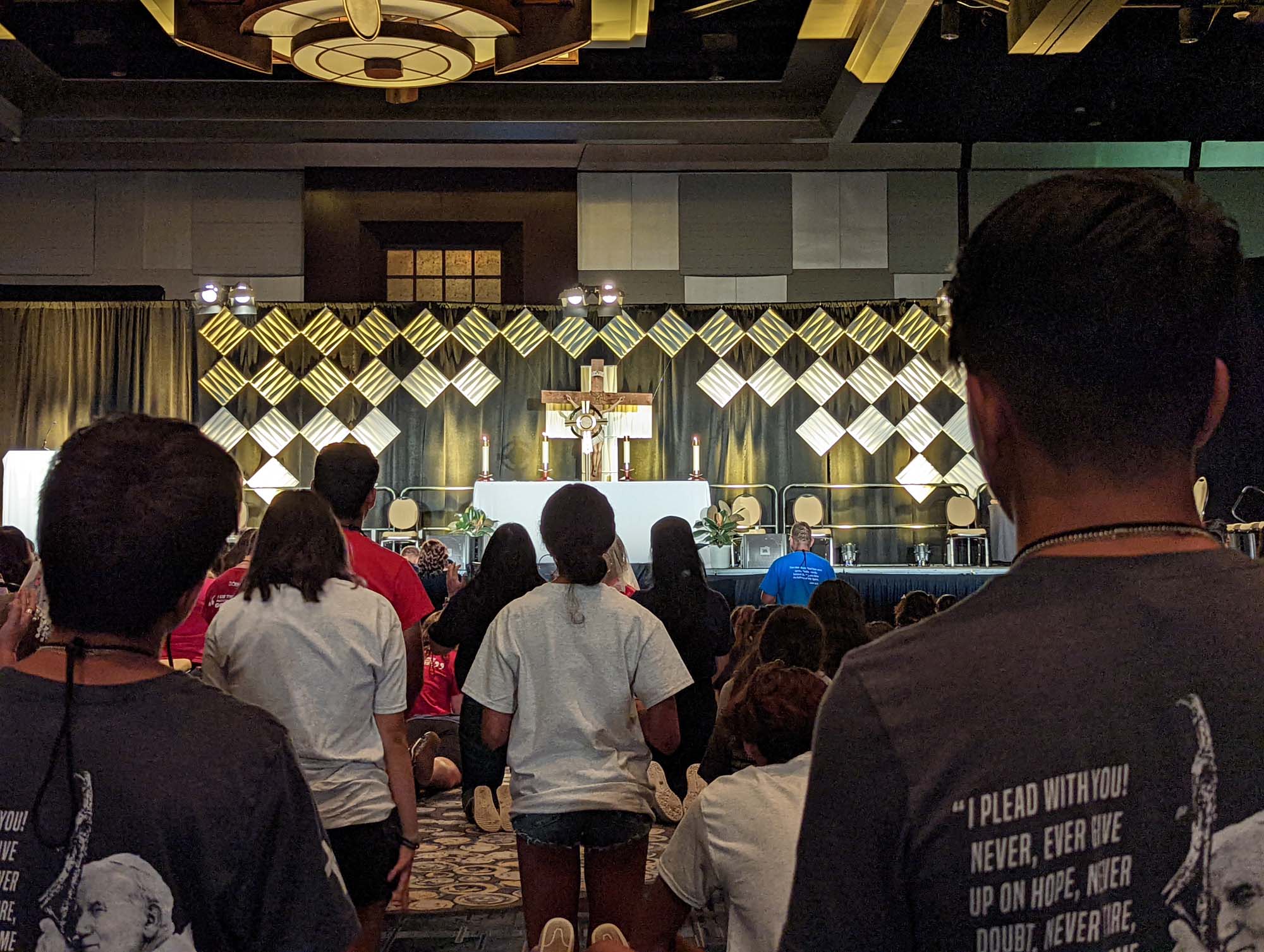 Young Catholics kneel during Eucharistic Adoration during the Archdiocesan Youth Conference on July 31 at the Hilton Americas-Houston in downtown Houston. (Photos by James Ramos and Sean O’Driscoll/Herald)

HOUSTON — While other teens might have spent one of the last summer weekends at the pool or at the beach, nearly a thousand young Catholics from all across the Archdiocese, and their leaders, packed the ballroom at the Hilton Americas-Houston hotel in downtown Houston for the 2022 Archdiocesan Youth Conference.

The annual event, held this year from July 29 to Aug. 1, gathers young people from all over for a weekend of Liturgy, Sacraments, prayer experiences, fellowship and more. This year’s speakers included keynotes from Houston-native Sister Josephine Garrett, CSFN, Father David Michael Moses of Christ the Good Shepherd Catholic Church in Spring and Christian illusionist Danny Ray.

Panel sessions were led by a number of locals like Father Ray Cook, OMI, who serves at Rice University’s Catholic Student Center; Father Hoang “Wayne” Ly of St. Martha Catholic Church in Kingwood; Gabriel Castillo of St. Theresa Catholic Church in Sugar Land; Sara Alexander, a counselor with Gratia Plena, a Houston counseling firm; and Alex Gotay. They were joined by a number of other speakers from across Texas, such as Whitney Godfrey from Waco and Gian Gamboa of Austin.

Two separate workshops offered young Catholics of Hispanic and Vietnamese descent, giving a special space for these groups to meet and pray with their own peers in a unique setting. Topics ranged from living the faith in college, navigating culture, learning to pray with the Blessed Mother “Mary, Our Mother of Mercy,” and two unique mens’ and womens’ sessions. Joshua Blakesly, music ministry coordinator at St. Anthony of Padua Catholic Church in The Woodlands, led worship throughout the weekend.

Father Houston Okonma, parochial vicar at St. Vincent de Paul Catholic Church, served as the conference’s chaplain, celebrating Saturday’s morning Mass and led Benediction and Eucharistic Adoration following the Mass. During the Liturgy, hundreds of young Catholics knelt before the Blessed Sacrament in prayer and meditation. That morning, a large contingent of priests heard hundreds of confessions, including Daniel Cardinal DiNardo. The next day, he celebrated morning Mass with all of the attendees to bring the gathering to a close.

For more information about the Archdiocesan Youth Conference, visit www.archgh.org/oace.