A standing witness: Thousands rally for life in Austin 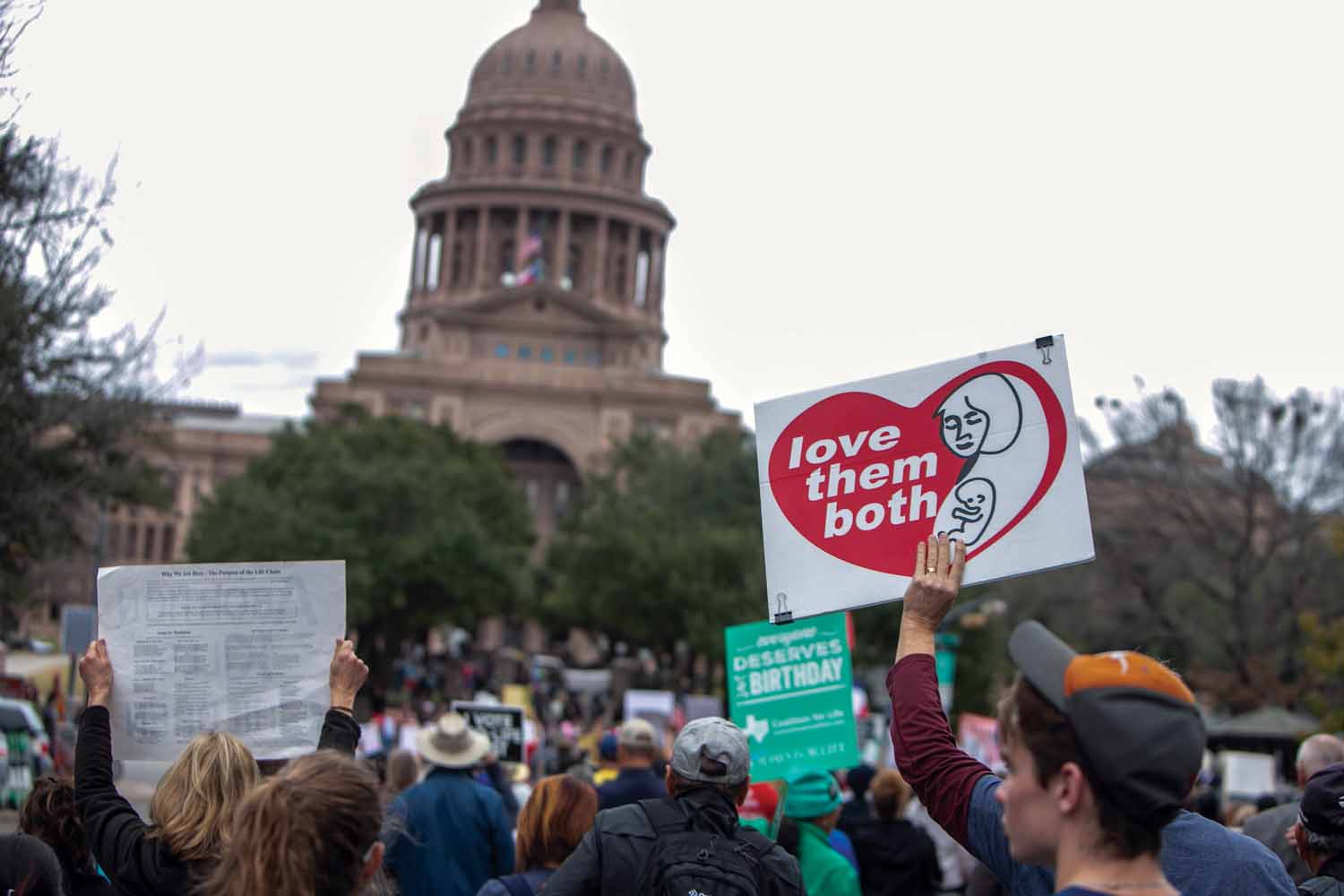 Thousands, including a hundred from parishes, schools and community organizations in Galveston-Houston, march to the Texas State Capitol to attend the Rally for Life in Austin on Jan. 25. (Photo by James Ramos/Herald)

AUSTIN — They came by bus, car, bike and even electric scooter.

Marching dozens of blocks through downtown Austin, more than 5,000, according to local officials, turned out for the 2020 Texas Rally for Life on Jan. 25. Carrying signs — including a number of handmade posters inspired by the new Baby Yoda meme — with pro-life messages, praying Rosaries and chaplets. Chanting “We are pro-life!”, they converged upon the steps of the Texas State Capitol to call for an end to abortion just days after the 47th anniversary of Roe v. Wade, the 1973 Supreme Court case that legalized abortion in the U.S.

The rally, which featured an ecumenical variety of speakers, reflected the wide diversity of those involved in the pro-life cause.

Father Jairo Sandoval-Pliego, pastor of San Jose Catholic Church in Austin, opened the rally with an invocation prayer, prayed for the “grace to continue our peaceful fight for the gift of human life” to be “courageous witnesses of the Gospel.”

IN PHOTOS: Texans rally for life in Austin

An abortion survivor, Clare Culwell, shared how she escaped death when her 13-year-old mother aborted her twin in the womb. When her mother had her abortion, Culwell’s mother returned to the clinic because her belly was still growing because she had twins, Culwell said. 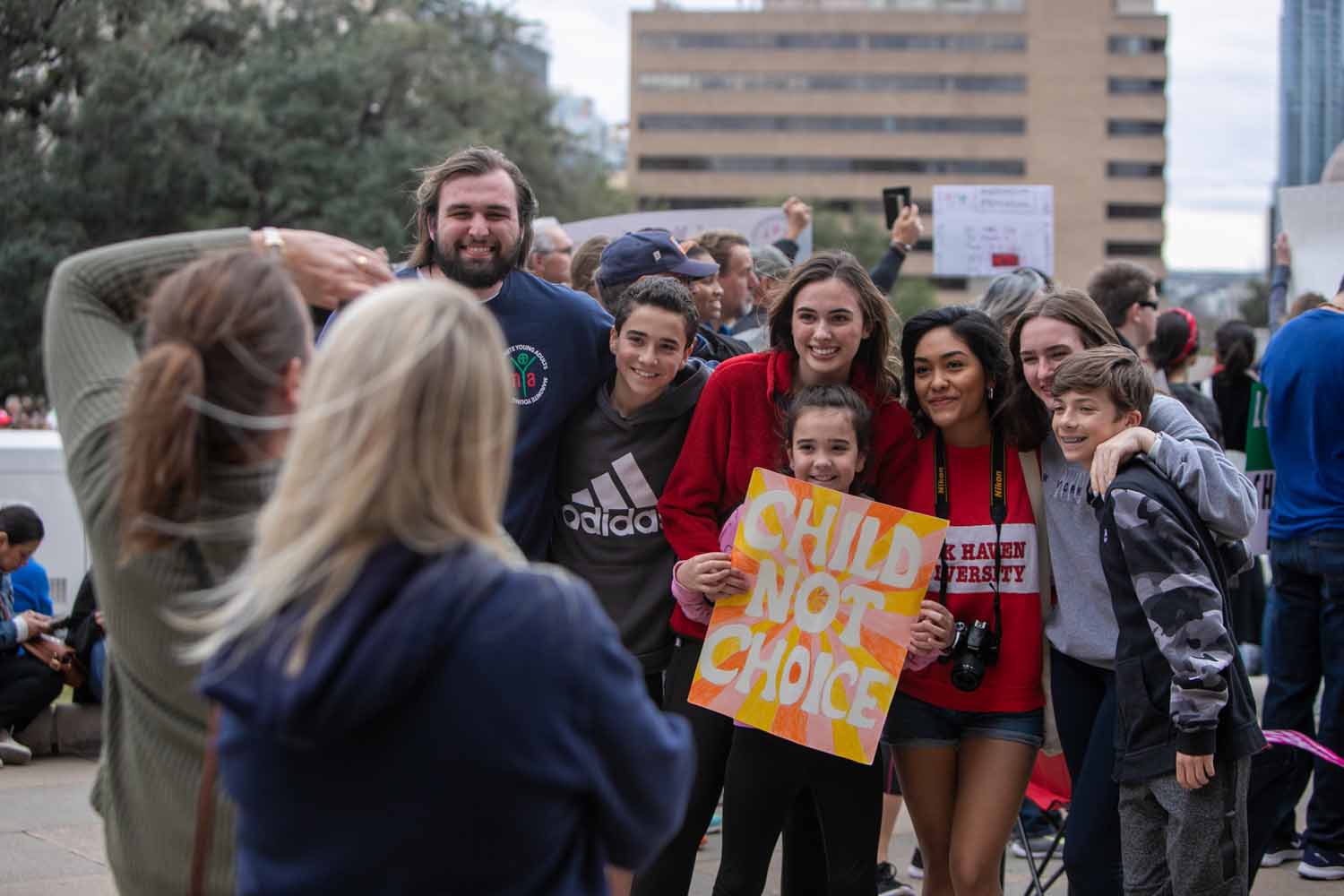 The Texas gathering happened a day after U.S. President Donald J. Trump spoke to the thousands attending the March for Life in Washington, D.C., the first sitting president to attend the annual pro-life event.

Lynette Salmon, who attends Sacred Heart Catholic Church in Manvel, said she felt called to become more involved in the pro-life when she first encountered pregnant teen students while working at a public Houston high school as a nurse.

“It was devastating,” Salmon said.

She remembered how once a young girl came to her with a “non-descript” note, without a doctor’s name, that excused her from PE for six weeks.

When asked why, Salmon said the student broke down into tears.

In confidence, the student shared she had had an abortion, that she didn’t have a choice to keep the child and was prompted to abort the baby and “that was it.”

While she often saw young girls dealing with abortion, she recalled a young high school teenager who came to her “distraught” because he and his girlfriend had become pregnant — unplanned.

Her parents feared the new mother would lose her athletic scholarship, so they pushed her towards abortion, while the new teen father and his parents wanted to keep the child and support the baby in every manner. But the teen mother, at her parents’ demand, had an abortion.

“He was just beside himself in grief,” she said. “It was horrible. Those were horrible circumstances... So we have to do something here to stand up as witnesses, not only to the people here, but to all the state of Texas that we need to defend human life at all stages.”

On the diversity of those attending the rally, Salmon said it was clear that abortion “affects everybody,” and that “it’s a universal issue.” 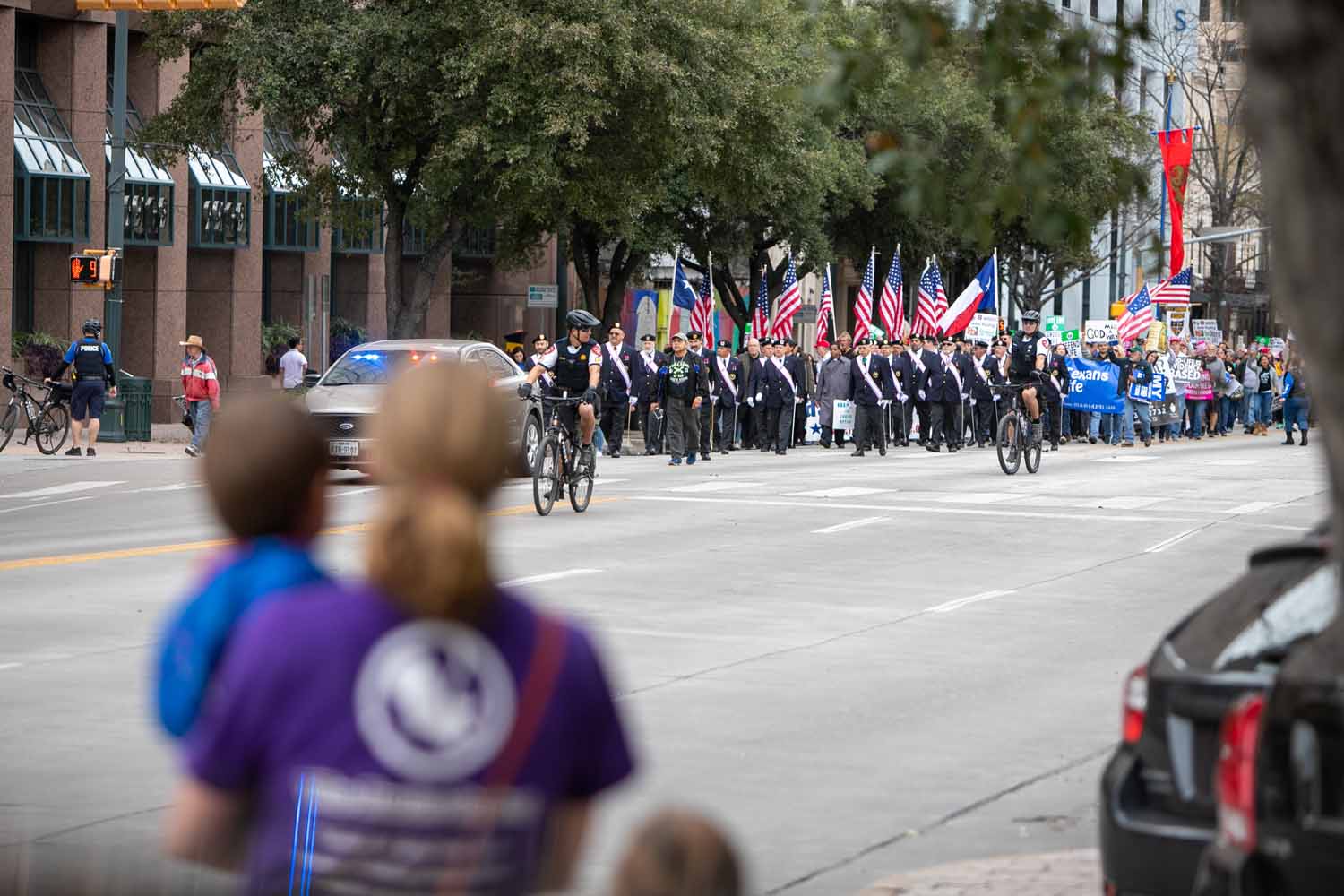 Leading a group of 60 students from Frassati Catholic High School in Spring, Sister John Paul, O.P., said it was crucial for her students to work to “establish a culture of life.”

“The dignity of the human person is at great risk right now in our culture,” the school’s principal said. “It’s important for (the students) to have the opportunity to speak up, for the dignity of each human person.”

A small group of pro-choice protesters was present near the rally, something that Sister John Paul said was important for her students to see.

“I think it’s also good for them to see that there are people who really oppose life, who really are trying to defend a woman’s right to kill her baby,” she said. “I think sometimes for young people that doesn’t seem real to them.”
While not everyone can attend the March for Life in Washington, Sister said attending the Austin rally was “a great gift.”

Incarnate Word Academy Senior Grace Garwood was one of the many young people attending the rally.

“I came today to protest abortion, to speak for the pro-life movement and give a voice to the people who don’t have voices,” she said. Garwood attends St. Martha Catholic Church in Kingwood.

She felt it was “super empowering” to attend the rally with her 14 classmates “in solidarity” with people from very different walks of life.

Still, being a pro-life and a young woman guarantees its own challenges, especially in recent times, with increased calls for the right to abortion in the March for Women movement.

Garwood said she often is given the assumption that she’s pro-choice, and that if she’s pro-life, she’s not “standing up” for her own kind.

“That’s just really discouraging because I am standing up for women. I’m standing up for women in the womb that we are persecuting and killing,” she said. “It is hard being young and supporting things because people don’t take you as seriously. But, I think truth is on our side, and truth will come out.”

Garwood joined thousands from all 15 dioceses in Texas, with dozens coming from as far as El Paso and the Rio Grande Valley. 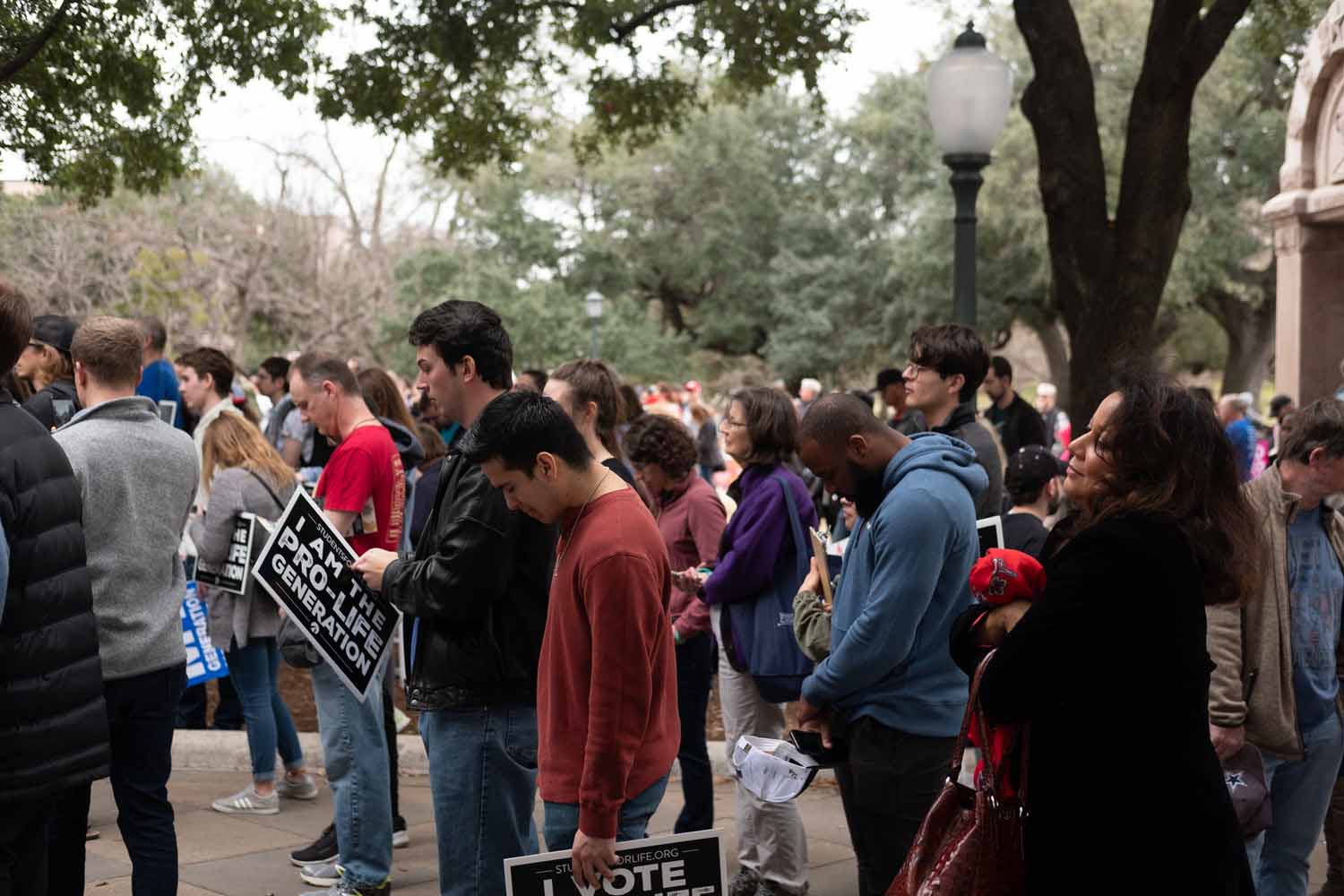 Nearly a dozen seminarians from St. Mary's Seminary in Houston also attended the rally. One seminarian said he appreciated the sense of solidarity he received when seeing other clergy and religious at the rally.

Dozens of events around Texas joined the national call at the March for Life in Washington, D.C., to end abortion. Several groups from Houston attended the March in the nation's capital.

Ahead of the Austin rally, two Austin-area parishes hosted prayer services and Masses. In Amarillo, St. Mary Cathedral hosted a Respect Life Mass Jan. 25, followed by a mile-long Respect Life walk. On Jan. 18, thousands marched a mile from Our Lady of Guadalupe Cathedral in Dallas and rallied outside the Earle Cabell Federal Courthouse, where the Roe V. Wade case was first filed in 1970.

Also, on Jan. 18, El Pasoans gathered for the Southwest March for Life at in El Paso, which included a major proclamation by El Paso’s mayor and city council, the first of its kind ever. Pro-life advocates in San Antonio held a march and rally for life that same day.

In cities around the state, like San Angelo, Houston and Dallas, vigils were also held outside abortion facilities. In recent years, ecumenical efforts have also grown to include the breadth of the Christian tradition.