‘A simple, humble laborer in the vineyard of the Lord,’ Pope Emeritus Benedict XVI is laid to rest 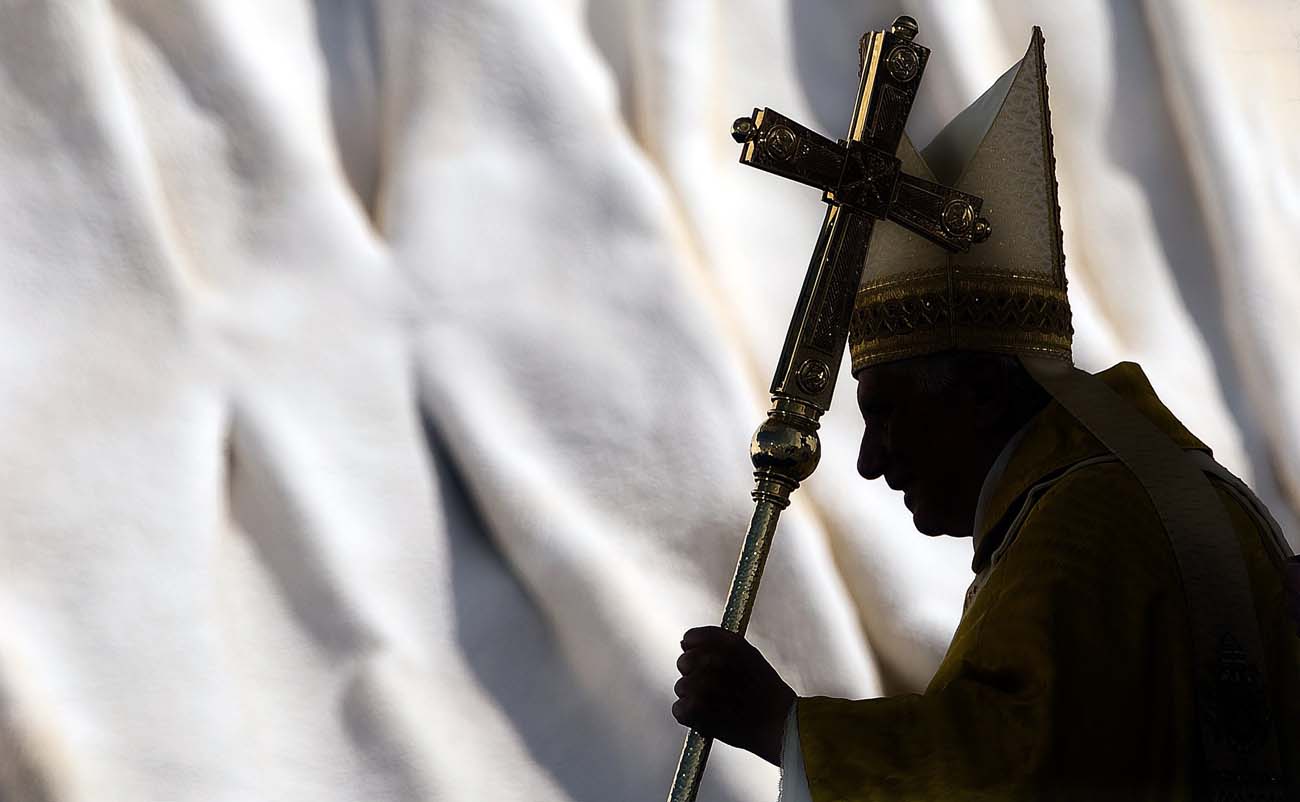 Remembering Pope Emeritus Benedict XVI
‘A simple, humble laborer in the vineyard of the Lord’ is laid to rest

VATICAN CITY — “Lord, I love you.” The pope’s secretary, Archbishop Georg Gänswein, said a nurse heard the late pope’s last words several hours before his Dec. 31 death, according to the Vatican.

He whispered the phrase in Italian, expressing his life’s vision and message of his papacy, a legacy that was remembered just five days later during his funeral Mass celebrated at 9:34 a.m., the same time he died just five days earlier.

For those who knew him or studied his works, his final words before his death encapsulated the message of his papacy and even his life.

Daniel Cardinal DiNardo concelebrated the Jan. 5 funeral Mass of Pope Benedict XVI with Pope Francis, who presided over the Mass.

Mitchell Schumann, a seminarian of the Archdiocese of Galveston-Houston studying at the Pontifical North American College in Rome, was among the 200,000 to pray and pay their last respects to the late pope at the Vatican. Schumann said he visited Pope Benedict on Jan. 2 and Jan. 3. He also attended the funeral Mass in St. Peter’s Square.

“I was quite stirred to see so many people coming to pay their respects to this saintly man,” Schumann said. “Pilgrims were not able to stop and stay by his body very long, but you could really get close enough to see the Holy Father clearly. The frailty of his age and simplicity of his vestments spoke to the humility of this man who was the first to step aside from the highest office in the Church in centuries. It was a very moving experience to be able to be there to pray for the repose of this good and holy man who had longed to see his Lord for so long.”

While at St. Peter’s Basilica, Schumann said he prayed for the repose of the late pope’s soul and meditated on his love and devotion for Jesus.
“I thanked the Lord for the wisdom and teachings of this theological giant who has helped guide the Church in the post-conciliar era. I asked Pope Benedict also to pray for our Holy Father, Pope Francis, as he guides the Church in such difficult times,” he said.

In the Basilica, Schumann said, “there was a pregnant silence in the Basilica indicative of the spirit of prayer which captivated the men and women in the Church.” He found it moving to hear the love of the pilgrims for the spiritual father they came to pray for and honor.

Schumann said Pope Benedict had a great impact on his spiritual life, as well as his discernment and vocational journey. Pope Benedict was elected pope during Schumann’s junior year of high school, and the pope’s teachings would affect his future.

After reading the late pope’s first encyclical, “Deus caritas est,” Schumann said that the “love His Holiness had for our Lord was intoxicating — I knew I wanted to have a love like that myself.”

Both in line and at the funeral Mass, Schumann said he heard beautiful prayers for the late pope, in song and in chants calling for the canonization of Pope Benedict.

Eight days passed from the time the world received notice that the retired pope’s health was failing and his funeral at St. Peter’s Basilica. During his weekly general audience Dec. 28, Pope Francis asked the faithful for prayers for Pope Benedict, calling him “very ill” and petitioning “the Lord to console him and sustain him in his witness of love for the Church until the very end.”

Following that audience, Pope Francis visited Pope Benedict at his residence — a former monastery in the Vatican gardens where he had lived since his 2013 resignation from the Petrine ministry — according to Matteo Bruni, Vatican press office director. Pope Benedict also received the Sacrament of Anointing of the Sick that day.

The Vatican press office provided updates on the 95-year-old retired pope’s condition Dec. 29 and 30, noting that he was declining but, on Dec. 29, was “absolutely lucid and alert.” Then, on New Year’s Eve at 9:34 a.m. Rome time, Pope Benedict died in his residence.

Pope Francis was reported to have gone immediately to his predecessor’s bedside for prayer. At vespers that evening, Pope Francis recalled Pope Benedict with gratitude: “gratitude to God for having given him to the Church and to the world; gratitude to him for all the good he accomplished, and above all, for his witness of faith and prayer, especially in these last years of his recollected life. Only God knows the value and the power of his intercession, of the sacrifices he offered for the good of the Church.”

Remembrances of Pope Benedict’s life and analysis of his papacy immediately flooded the media, some glowing, some critical. These painted contradictory portraits of the man who pastored the Catholic Church from 2005 to 2013 and who, as pope, first introduced himself as “a simple, humble laborer in the vineyard of the Lord.” Those who knew him well said there was nothing contradictory about the man himself.
In tributes, the retired pope was especially praised for his theological contributions, beginning as a young priest-professor teaching at German universities and adviser at the Second Vatican Council; then 23 years as prefect of the Congregation (now Dicastery) for the Doctrine of the Faith; and finally as pope, an office to which he was elected following the death of his longtime collaborator St. John Paul II.

Among those works is the 1968 book “Introduction to Christianity,” which has been widely translated and called a “masterpiece.” Pope Benedict also oversaw the compilation of the Catechism of the Catholic Church, published in 1992, under St. John Paul.

“He stands in a singular position as a theologian pope. No pope has written that much and so much in an original and decisive way,” Father de Gaál said.

As prefect of the Congregation for the Doctrine of the Faith from 1981 until his papal election in 2005, then-Cardinal Ratzinger had the job of defending Church doctrine, a role that earned him the moniker “God’s Rottweiler.”

Because of that public perception, Christopher Ruddy, associate professor of systematic theology at The Catholic University of America in Washington, said he was pleasantly surprised when he began reading Ratzinger’s writings, including his memoir “Milestones,” in the late 1990s.

“I found that this was the theologian who was speaking to my heart,” he said. “I’m like, ‘This is a very different person than I’ve been led to believe that he is.’”

Ruddy, who teaches a course on Pope Benedict, said then-Cardinal Ratzinger’s 2000 book “The Spirit of the Liturgy” will likely prove to be his most influential. It presents the Liturgy as “not something that we do once a week or once a day or so on, but that our entire lives are meant to be liturgical, and that what we’re most ultimately made for is to worship God, to praise Him, and in doing that, to become fully human and fully alive,” Ruddy said.

Even in death, Pope Benedict invited the world into worship and ritual. Dioceses around the world memorialized the retired pope with special Masses. On Jan. 2, his body was brought on a stretcher via a van from his residence to St. Peter’s Basilica, where it lay in state through Jan. 4.

Popes are typically buried in red, and Pope Benedict’s body had been dressed in the red vestments he wore in Sydney at World Youth Day in 2008 — a nod, some observers noted, to his esteem for World Youth Day gatherings. After the viewing ended Jan. 4, his body was placed in a cypress casket along with a text describing his life and contributions known as a “rogito.”

Because Pope Benedict had retired from the papal office, preparations for the Jan. 5 funeral Liturgy did not include all elements typical of a pope’s funeral Mass — a fact that some Catholics found confusing or even troubling. Vatican officials emphasized that there were no official protocols in place for the death of a retired pope, and some of the rituals associated with a pope’s death, such as the ringing of St. Peter’s bells or the destruction of his papal ring, had taken place at the time of Pope Benedict’s retirement in 2013.

Ultimately, the funeral rites were expected to be “more than for a cardinal, less than for a pope in office,” Catholic News Service Rome reported.

Pope Benedict had also requested that his funeral Mass be simple, according to the Vatican press office. In the United States, President Joe Biden, a Catholic, paid respects by visiting the Vatican’s apostolic nunciature in Washington, where the public could sign a book of condolences Jan. 3 and 4.

‘May your joy be complete’

Pope Francis presided at the funeral Mass — a rare situation in Church history where a seated pope was present at his predecessor’s funeral. In 1802, Pope Pius VII celebrated the funeral of Pius VI, whose remains had been returned to Rome after he died in exile in France in 1799 after being imprisoned by Napoleon.

Giovanni Cardinal Re, dean of the College of Cardinals, was the main celebrant at the altar. Concelebrating were about 120 cardinals, including Cardinal DiNardo, 400 bishops and 3,700 priests. An estimated 50,000 people filled St. Peter’s Square for the 90-minute, live-streamed Mass. A few banners made it past security checks, with one reading “Santo Subito” (“Sainthood Now”) and another, “Thank you, Pope Benedict” in German.

Pope Francis’s homily focused on Christ’s love and witness as an invitation to holiness rather than Pope Benedict’s life or accomplishments. However, Pope Francis said that the Church desired to follow in Pope Benedict’s steps and commended him to God, concluding the homily with, “Benedict, faithful friend of the Bridegroom, may your joy be complete as you hear His voice, now and forever!”

Following the funeral, Pope Benedict was buried in a triple coffin — the first cypress, the second of zinc and the third of oak — and interred in the same crypt where St. John Paul was initially buried, and prior to him, St. John XXIII. The crypt opened to visitors Jan. 8.

On Dec. 31, as many admirers reflected on his writings, Pope Benedict left the faithful with another final word: his own reflection in a spiritual testament written in 2006 but released for the first time 10 hours after his death. In the short document — in English, about 700 words — he asked for forgiveness from those he wronged, honored his parents and siblings, and urged Christians to “stand firm in the faith” and resist confusion, especially where science appears to contradict faith.

“If at this late hour of my life, I look back over the decades I have been living, I first see how many reasons I have to give thanks,” he wrote at age 79. “First of all, I thank God Himself, the giver of every good gift, who gave me life and guided me through various moments of confusion, always picking me up whenever I began to slip and always giving me the light of His countenance again. In retrospect, I see and understand that even the dark and tiring stretches of this path were for my salvation and that it was in them that he guided me well.”

– OSV News contributed to this report.