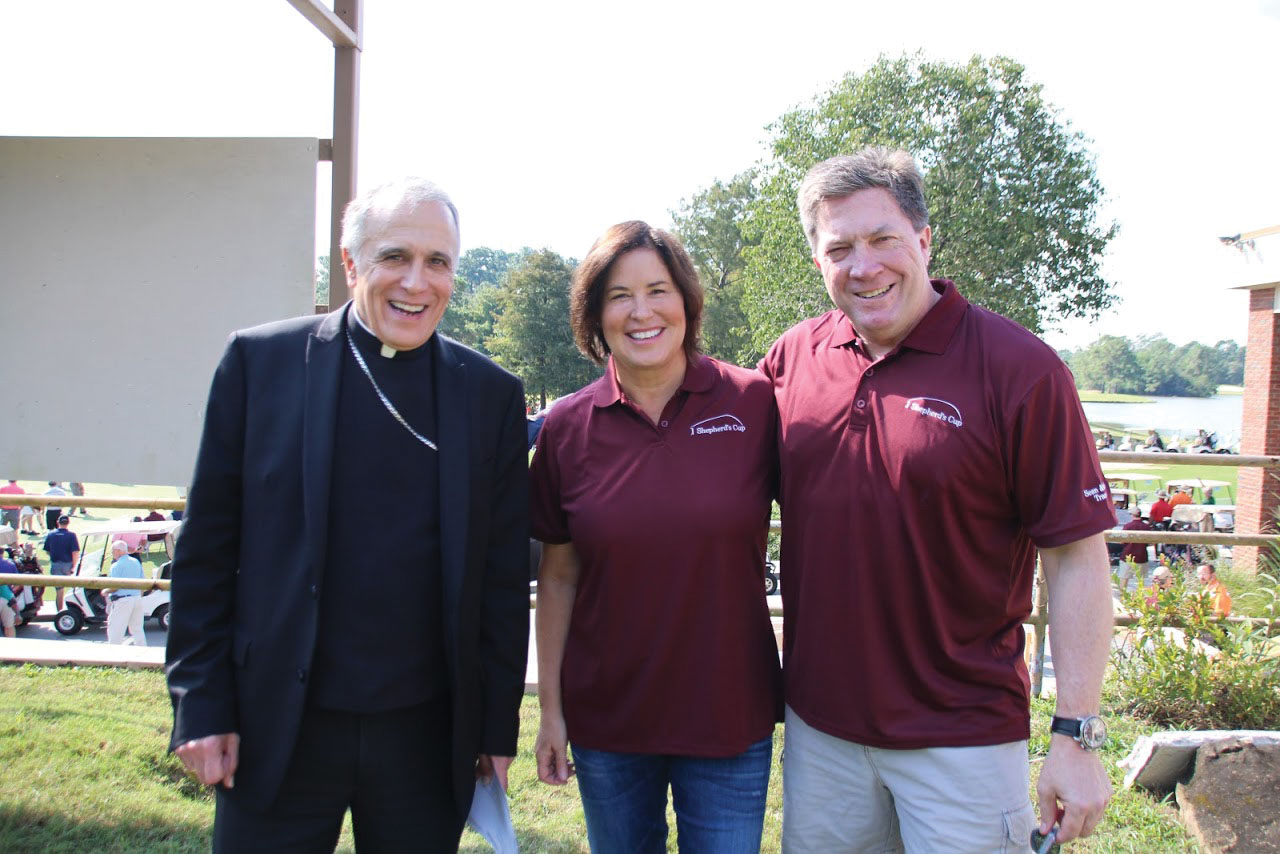 HOUSTON — The title sponsors of the Shepherd’s Cup Golf Classic, Sean and Kari Tracey, are grateful for an experience that allowed them to help strengthen the Church in so many areas across the Archdiocese.

Together over the past nine tournaments, the couple has helped raise $2.5 million, which has supported Inner City Catholic Schools, faith formation, clergy formation and St. Mary’s Seminary. Prior to that they sponsored the Archbishop Fiorenza Golf Tournament, renamed Shepherd’s Cup in 2007.

“We thank God we have been gifted with this experience...” Sean Tracey said. “It has been a joy.”

The Traceys originally got involved because they wanted to help provide additional funding for struggling Catholic schools and for St. Mary’s Seminary — at the behest of then rector of St. Mary’s Father Brendan Cahill, now bishop of the Diocese of Victoria.

“I believe Catholic education is of paramount importance as it marries the search for truth in the secular world with the truth of our Catholic faith and demonstrates there is no hostility between the two,” Sean Tracey said.

The reach of this annual tournament has been far and wide. The funds have been used to boost young adult programs such as Café Catholica; marriage programs, like the Together in Holiness conference; the Hispanic ministry; and the Catechetical curriculum for parishes.

Half the proceeds from the tournament go to St. Mary’s Seminary to strengthen clergy formation, while Catholic schools in the inner city have used funds in such areas as staff development, analysis of students test scores and updating websites.

Jim Barrette, secretariat director for Pastoral and Educational Ministries, said the additional funding has allowed his ministries to be creative, while following the lead of the spiritual needs and aspirations of parishioners. He said sometimes it’s about providing more outreach to young adults, other times it could be parents and grandparents.

“When you have seed money to work with — we can use that to try different programs — we can say, ‘let’s try this,’” Barrette said. “And I’d say we’ve been very successful in meeting the needs of our faithful.”

Barrette pointed to the success of Café Catholica, originally a one-night event in July in one location that has spread to five locations, and the development of the curriculum for faith formation, a vision that has become reality for first through fifth grades and is currently being developed for early childhood and sixth through 12th grades.

Of course, the tournament is also about bringing folks from across the Archdiocese together for fellowship and a fun day out in support of a great cause. Danny Grant and Ron Reismeyer have been involved with the tournament since its inception, because they want to strengthen the Church for future generations. However, they’re also in it for the people and the golf.

“It’s golf, which I love, and it’s a way to see a lot of people that I know that are in the community,” said Reismeyer, the former president of St. John XXIII College Preparatory in Katy. “And the other good thing is we get to see the Cardinal riding around in his Cardinal mobile. I would just encourage anyone who hasn’t played to support it. It’s a great way to give back to the Archdiocese.”

The golf tournament is presented by Galveston-Houston Knights of Columbus Charities Inc. and will be held at Kingwood Country Club, 1700 Lake Kingwood Trail.

Tee off is at 11 a.m. with registration starting at 9 a.m. Teams with all players from the same parish are eligible to compete for the 2017 Shepherd’s Cup Parish Champion Trophy.

The event includes the golf tournament and awards dinner. Organizers invite everyone in the Archdiocese to support the event by becoming a sponsor, registering a team or volunteering. Sponsor packages are available from $250. To volunteer, contact volunteer chair Brandy Snipp at brandy@brandsnipp.com.