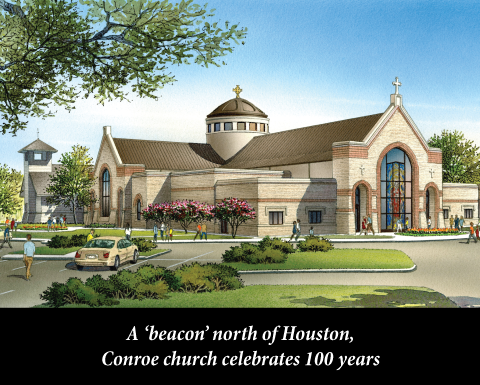 Founded in 1916 as a small missionary church, Sacred Heart Catholic Church in Conroe is constructing a new church building to serve the more than 7,500 families that attend the Montgomery County church. Rendering courtesy of Sacred Heart - Conroe.

CONROE — On the southeastern edge of downtown Conroe, a big green hill dominates the landscape of Heritage Place Park. With chairs and blankets, hundreds of Christians from across Montgomery County turned out here on Nov. 5 for Faith Fest 2016, a festival featuring national Christian music artist Brandon Heath and author Don Piper.

An ecumenical effort between Sacred Heart Catholic Church in Conroe and several other Christian denominations in the county, the event benefited area charities including Sacred Heart’s St. Vincent de Paul Society, according to Sacred Heart parishioner Jody Czajkoski. “United in community,” was the goal of the concert, he said.

Just across Frazier Street, Sacred Heart’s efforts to serve the greater community continue to grow, as does its church family.

Founded in 1916, the church was originally a mission of Plantersville and named St. Mary of the Woods. Now a century later, Sacred Heart is led by pastor Father Philip Wilhite, who is charged with the spiritual care of the more than 7,500 parish familes and souls in Montgomery County.

“Today, we at Sacred Heart echo the strong faith of those who lovingly sacrificed to build and nurture the faith in Conroe,” Father Wilhite said. “We are grateful for these parishioners, our predecessors in faith, who were caring for their present needs as well of the needs of many who, in the future, would join Sacred Heart.”

While in the midst of a capital campaign to build a new church building and other resources for the burgeoning parish, a newly built St. Vincent de Paul Center provides increased space to serve the county’s needy with a food pantry, clothes closet and other assistance.

Before Sacred Heart’s founding, missionary priests ministered to the Conroe area, a rural sawmill town that later became the county’s only major railroad junction. These priests, several of whom traveled by horseback, planted the seeds for Conroe’s Catholic community.

In 1898, Andrew Madeley invited Father Joseph I. Klein to offer Mass in his Conroe home. Soon a tiny mission church was built. In 1912, after some construction, one priest wrote Bishop Nicholas A. Gallagher: “we have no furnishings whatsoever but intend to put in a temporary altar and Communion rail soon.”

Some 20 years later, thanks to a gift from George Strake and William Pfiffner, a brick church was built on land donated by a local Conroe family, the McDades.

Several members of the Andrew Madeley’s family continue to be members of the parish, said Parish Pastoral Associate Eileen Borski.
Borski, with her husband Jeff, are longtime Sacred Heart parishioners. With children who attended Sacred Heart School, which was founded in 1958, the family has seen the church community grow with the Conroe area.

“The most significant changes Jeff and I have seen at Sacred Heart are the beauty of the growth in the number of parishioners and the increasing cultural diversity of the parish,” Eileen Borski said, noting the parish’s growth from 3,000 families in 1999 to the more than 7,500 currently served today. “Another big change is the physical size of the campus. It has increased tremendously from less than 10 acres to over 16 acres now.”

A cooperative effort between the parish and school shines in several community events, including Steps for Students, holiday gatherings, as well as Veteran’s Day celebrations.

Eileen said the day her husband Jeff was introduced to be in formation as a deacon candidate to serve the parish is a highlight of their church experience. “We could both feel so much love from the community for his ongoing commitment, but for what is to come when he, God-willing, is ordained in 2019,” she said. “It has to be the love felt in that moment, but so many other moments too throughout the years”

Back on that grassy hill in Heritage Place Park across the way, Faithfest concertgoers will one day be able to see the cross of Sacred Heart’s new domed church. Borski said the location and visibility will act as a “beacon of love, hope, community and service” to Conroe. But for now, the faithful continue to pray and work for those in the woods of Montgomery County.

For Mass times and more information about Sacred Heart in Conroe, visit www.shconroe.org.