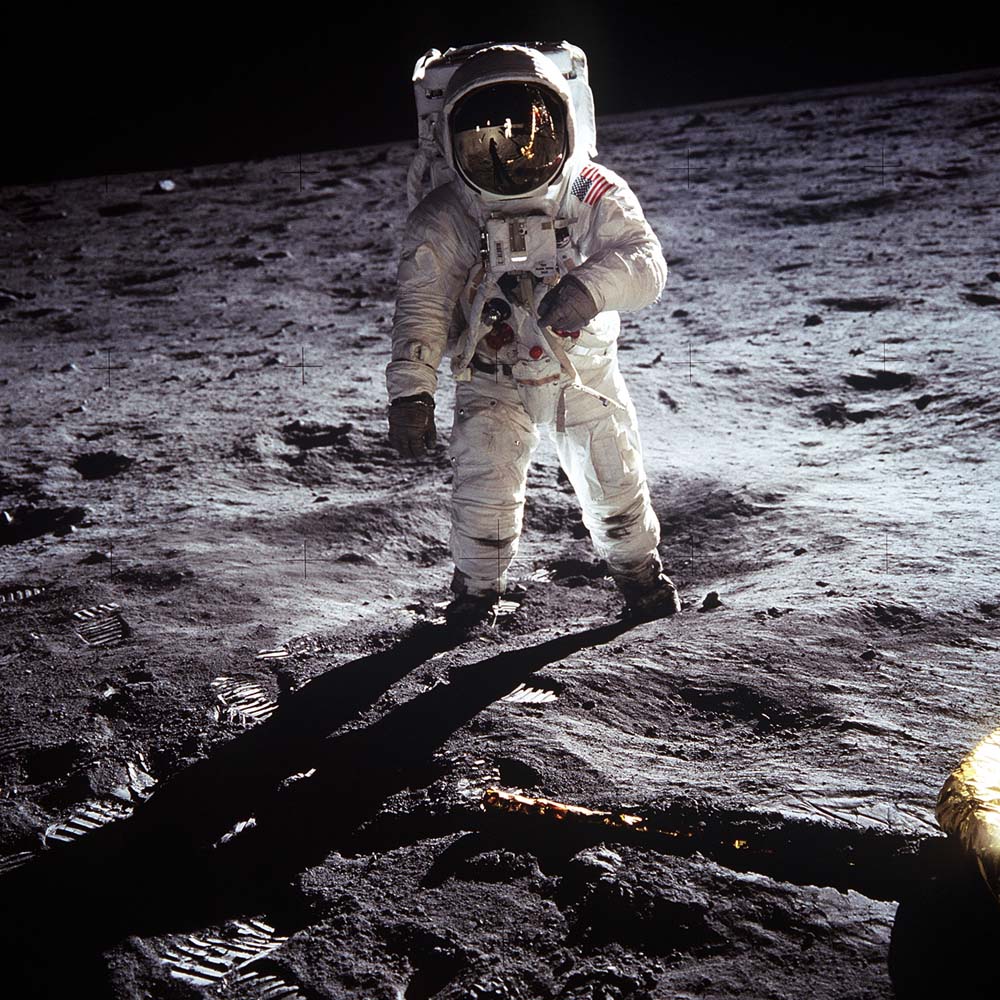 WASHINGTON (CNS) — When Apollo 11 astronaut Neil Armstrong gingerly stepped onto the surface of the moon and beckoned to Mission Control at NASA’s Lyndon B. Johnson Space Center in Houston on July 20, 1969, millions across the world watched in suspense.

Following the astronauts’ lunar “epic,” few were more proud than the Houstonians who lived, worked and prayed near the epicenter of manned flight in the Bay Area.

Monsignor John J. Davis, then-vicar general of the Galveston-Houston Diocese, who told the Texas Catholic Herald: “I think there are not words to describe the thrill of such an accomplishment on part of mankind.”

Monsignor Bernard J. Ganter, chancellor of the diocese said, “I am sure Almighty God is pleased that the Apollo journey to the Moon has opened up a vast new field of knowledge about His creation. As an American, I am terribly proud of the astronauts and it makes me even more grateful to belong to this wonderful country.” Monsignor Ganter would later be named bishop of Tulsa, then Beaumont.

Across the country in Detroit, Jesuit Brother Guy Consolmagno had no idea that some day he would become the director of the Vatican Observatory.

Sixteen at the time, he had followed the space program since Alan Shepard’s 15-minute suborbital flight eight years earlier. But becoming a scientist was not foremost in the mind of the teenage Consolmagno as he watched the grainy black-and-white televised images of Armstrong and Edwin “Buzz” Aldrin going about their tasks on the surface of another world.

Still, the events unfolding that Sunday evening 50 years ago left an impact on Brother Consolmagno, an avid reader of science fiction who especially enjoyed stories about what it might be like to travel into space.

“That put the connection in my mind that the things we fantasize about can actually happen. So dreams carry with them an important sort of reality,” he told Catholic News Service (CNS) as the golden anniversary of the first moon landing approached.

Years later, Brother Consolmagno would pursue studies in astronomy and then enter religious life. Today he heads one of the most prestigious astronomical institutions in the world while living his vocation and continues to marvel at the possibility of traveling to other planets. He sees God’s handiwork in it all.
“I can feel God in any of that work,” he said. “To me, you feel God in the joy of the moment. That the universe is logical and the fact that there is also beauty and understanding, it is a source of joy.”

The accomplishments achieved through scientific endeavors such as the moon landings can provide a glimpse into the way things work and what it means to be human, both key components of God’s creation, said Franciscan Sister Ilia Delio, professor of theology at Villanova University.

Discovery also can serve — if humanity allows — to help people realize the universe is so much larger than the planet human beings currently inhabit, Sister Delio explained.

“It’s obviously very, very hard for us to get our heads around the fact that we are on a planet that’s moving through space, that space is filled with all sort of material life and perhaps intelligent life that we have yet to discover. But the landing on the moon shows we can discover new things when we thought never before this could be done,” she told CNS.

“That’s what these discoveries are pointing to: a humble stance in this incredibly vast cosmos.”

Astronaut Nicole Stott, 56, has had two opportunities to experience a small corner of that cosmos during a pair of space missions — the first in 2009 when she spent three months aboard the International Space Station and the second in 2011 on a 13-day space shuttle mission.

Among Stott’s most awe-inspiring moments was seeing the thin layer of Earth’s atmosphere as she circled the globe every 90 minutes. “That little thin blue line is like Earth’s spacesuit, and we need to protect it,” she told CNS from Florida.

Stott, who is Catholic, retired from flying as an astronaut in May 2015. She admitted that watching the first moon landing as a 6-year-old while eating a grilled cheese sandwich didn’t necessarily inspire her career choice to become an engineer and eventually work for NASA.

“And I remember going outside and looking at the moon afterward,” she said. “I have colleagues who told me from that moment (of the landing) on that they knew they wanted to be an astronaut. I didn’t have that sense.”

But her parents encouraged the family to explore varied interests and — because her father was a licensed pilot — nurture a love of flying.

It was while working at NASA that Stott and her husband reconnected with their Catholic faith. Today, she sees no conflict between that faith and the pursuit of science to better understand God’s universe.

She said during her 27 years with NASA — 15 as an astronaut — she worked with astronauts and NASA employees who were inspired by their faith to explore space.
“The thing that was surprising to me in general was that there seems to be this perception that astronauts would be agnostic or atheist,” Stott said. “I was so happy to find that it’s more the other way, that there are more people of faith associated with the (space) program. It was a pleasant surprise to find how deeply faithful they were.”

The first moon landing itself was not without its religious connections. In preparation for the historic Apollo 11 flight, messages from religious leaders were among the artifacts collected to be flown on the lunar lander, reported National Catholic News Service, the predecessor of CNS. They remain there to this day for posterity.
The messages include one personally penned by St. Paul VI alongside the printed text of Psalm 8: “For the glory of the name of God, who gives men such power, we pray and wish well for this wondrous endeavor.”

The pope was particularly enamored with the flight. As Aldrin and Armstrong collected rocks and set up experiments while the third member of the crew, Michael Collins, orbited overhead, St. Paul went to the observatory at papal summer home at Castel Gandolfo outside of Rome. He looked through a telescope at the moon, eyeing the Sea of Tranquility where the first landing occurred.

Three months later, St. Paul welcomed the astronauts to the Vatican during a private 20-minute meeting.

Such wonder about what it's like on other worlds and the many natural mysteries God has planted for humans to encounter also tugs at Father James Kurzynski, an amateur astronomer who is pastor of St. Olaf Parish in Eau Claire, Wisconsin.

"Part of the human heart is to explore and discover," he said, "so why wouldn't we want to explore?"

Father Kurzynski, 45, is too young to remember the Apollo missions. "My connection was more as a Space Shuttle kid," he said. But he held a deep fascination with the heavens and over the years he has read about the history of spaceflight. That's how he encountered Aldrin's description of the stark lunar landscape as a scene of "magnificent desolation."

"There's something to that that really spoke to me spiritually. In our spiritual life, especially in Ignatian spirituality, we talk about desolation," Father Kurzynski said. "How can we see beauty amid desolation?

"Even though at one level one can see walking on the moon as (asking), 'Why go there? There's no trees, there's no atmosphere. It's just desolate.' I would love to see an earthrise. There's something amid that desolation that can heighten that beauty," he said.

"Finding this odd sense of beauty that seems to contradict the desolation is true in the spiritual life, that there are some very desolate moments in our life," he continued. "Then there's an earthrise, something that changes our disposition of heart and allows us to view this desolation differently from the standpoint of profound beauty as opposed to lifelessness."

So when Father Kurzynski shares with friends or parishioners a telescopic view of the moon, the planets or a deep sky object, he feels he is sharing insight into the beauty God has spread across the universe.

That leads Father Kurzynski to the question why humanity has not been to the moon in nearly 50 years.

Such involvement might yet again get people excited about space exploration and, by extension, think about the place of humanity in God's creation, said Duilia de Mello, vice provost and professor of physics at The Catholic University of America.

"We today are losing a little bit of touch. We need that kind of experience (of the celebration of discovery) to get perspective and see the planet from above and see how small we are in the universe, and at the same time see how special we are," de Mello told CNS.

While de Mello was just 5 during the first moon landing and has no memories of the event, as a young teenager she started reading about interplanetary space probes that the popular media widely covered in the 1970s. That exposure moved her to become an astronomer and she now studies the structure of galaxies and works with the Space Telescope Science Institute.

She urged scientists, educators and even the Catholic Church to renew a sense of curiosity in students -- as she experienced -- so they can better connect science in daily life.

It just may be inspire some of those students to help achieve humanity's first landing someplace other than the moon.