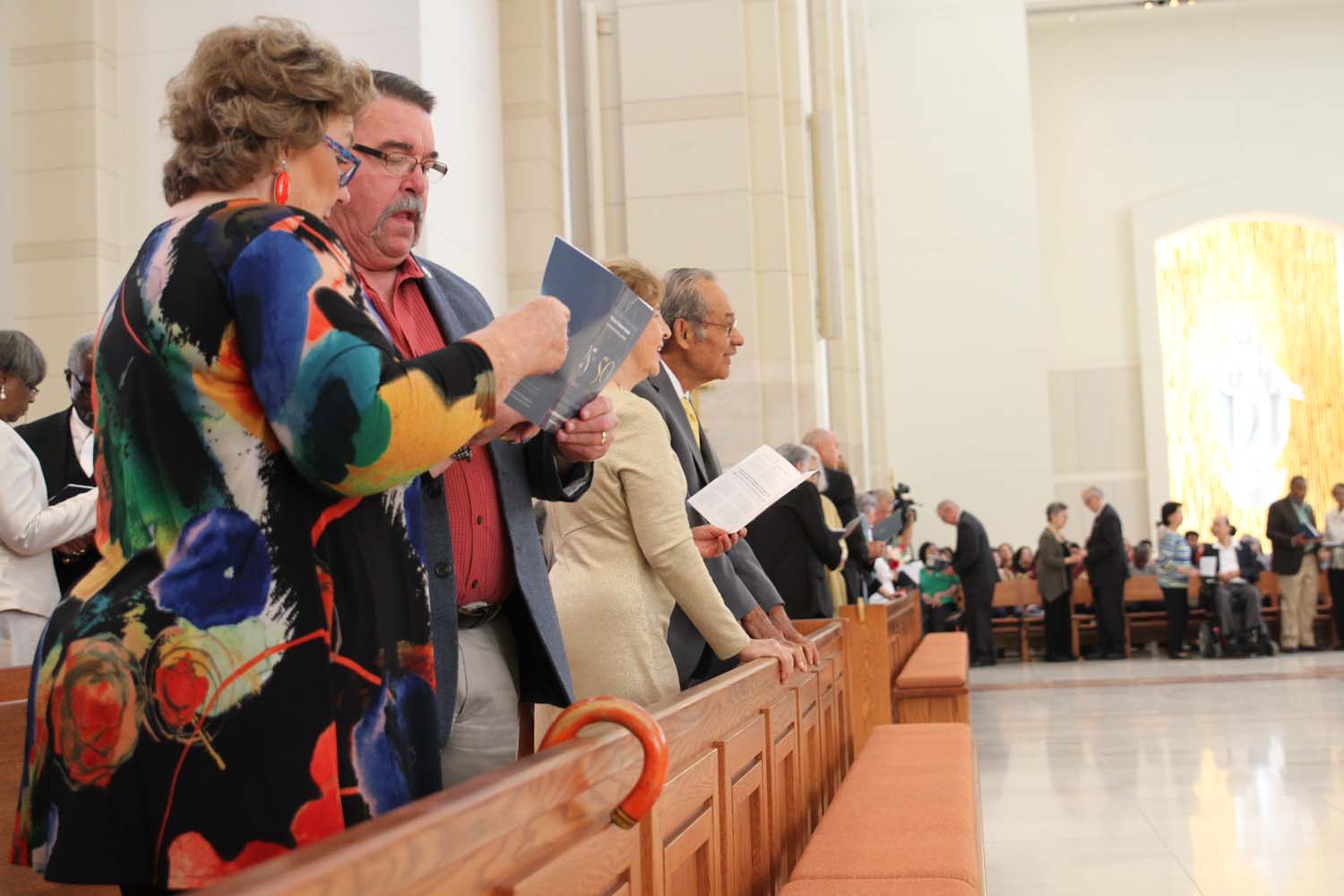 Couples they renew their vows during the Golden Jubilee Mass celebrated by Daniel Cardinal DiNardo at the Co-Cathedral of the Sacred Heart in Houston Oct. 20. (Photos by Family Life Ministries)

HOUSTON — More than 200 married couples who have shared 50-plus years of joys and sorrows celebrated their anniversaries in a Golden Jubilee Mass Oct. 20 at the Co-Cathedral of the Sacred Heart.

It all started as a blind date in their native Wisconsin when she had just graduated high school and he was a freshman at the Catholic, Jesuit Marquette University in Milwaukee. After dating for four years, they married June 21, 1969 at the University of Wisconsin-Madison Newman Center.

Dr. Barr said, “She was very outgoing and I’m a bit more shy. She could carry on a great conversation.”

Wendy Barr said, “He’s one of the kindest, nicest, loving persons I know. I liked him as soon as I met him.” 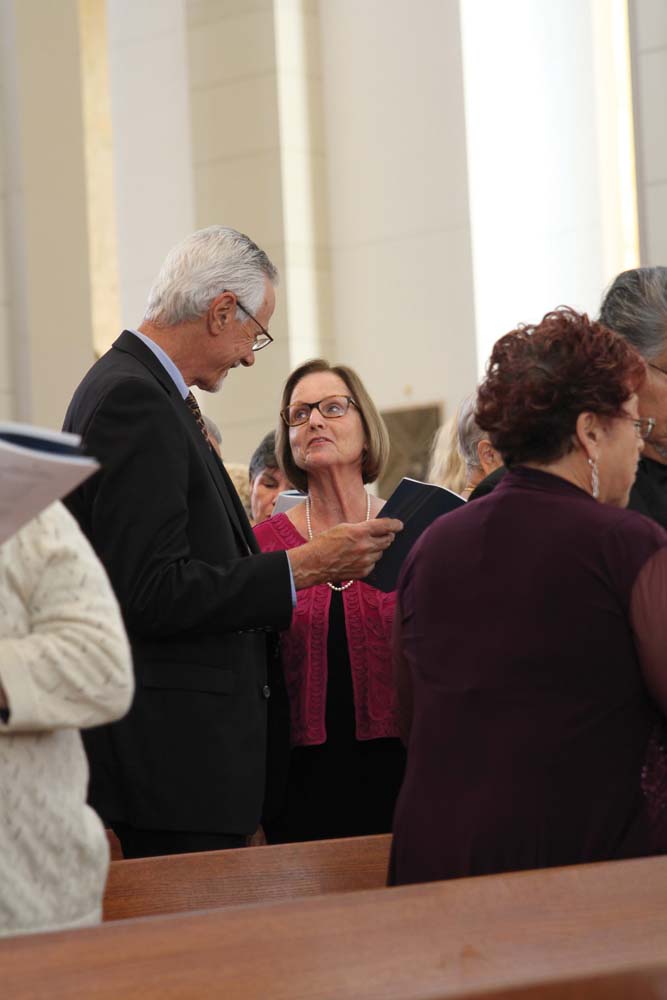 They moved to Texas and lived the bulk of their careers in Dallas. He was a cardiologist at the Methodist Hospital there, and she was a nursing professor at the University of Texas-Arlington. But when their two sons both landed in Houston as a psychiatrist and researcher, the couple decided to follow them and their two young granddaughters, now 8 and 5 years old.

Her sage advice to young couples; “You have to work together and help each other. We also made sure to have a date night once a week.”

He said, “Before you get married, make sure this is a person you want to be with forever. You are both different and will not agree on everything, but you listen to each other.”

Celebrating the bilingual Mass in English and Spanish, Daniel Cardinal DiNardo asked the couples to please do him a favor.

“Find a younger couple who needs support and guidance so you can help them,” he proposed.
Some of the couples do just that, acting as mentor couples for those newly engaged or married as part of the Marriage Preparation program required to be wed in a Catholic Church.

“To be married for 50-plus years in this day and age, when marriage is not so honored, is incredible,” DiNardo said. “It represents an important example for those in the Church, to show committed love not just in good times, but in troubled times.”

Another role model couple attending the Mass, Barbara and Ole Berntsen, celebrated their 50th wedding anniversary after meeting each other on the University of Houston’s main campus in 1967.
Ole, a junior in the College of Architecture, and Barbara, a math freshman, were also introduced by a mutual friend while she was playing a card game of spades with a group in the Cougar Den.

“I saw Barbara, and I was immediately attracted,” Ole said.

She had a boyfriend at the time, so a first date didn’t happen until that relationship played out. They finally went on their first date Feb. 10, 1968, according to Ole. He showed the first date entry on his electronic chart where the genealogy buff has generations of family entries.

They went to the long-gone Telephone Road Twin Drive-In Theater to see the movie “Invasion of the Body Snatchers.”

They dated for nine months, became engaged July 4, 1968 at Hermann Park and married a year later on July 5, 1969 at Our Lady of Mount Carmel Church, where they remain as parishioners.

“I always say God truly blessed me when He sent Ole my way,” Barbara said.

Parents of two sons, the couple said they hit a “rocky patch” when Barbara was diagnosed with multiple sclerosis in 1985. But a daily regimen of cardio exercise that they do together and high-quality vitamins keeps her medication-free.

Rare episodes happen that cause her to have difficulty walking and other muscle and nerve control issues. But it didn’t prevent her from being a math department head and teacher for more than three decades, mostly at Milby High School while he created his own architectural design company of Berntsen & Associates along with his brother.

“It’s so important to find a partner with the same values,” Ole said. Barbara nodded in agreement.

Hispanic community activists Felix and Nelly Fraga posed with Cardinal DiNardo, who made time after Mass to take photos with individual couples. They were among those with an “unbreakable bond” described by Cardinal DiNardo.

Fraga, now 90, attended the University of Houston on a baseball scholarship. He began working at Ripley House community center in 1954 with his social work degree and became director in 1970.

He had met the lovely Nelly in 1968 when she came to Houston on a social work scholarship from her home in Ecuador. He traveled there to propose to her in her hometown of Guayaquil, and they married on January 1969.

One of the hardest experiences they survived came when they lost their first son at four years old from complications of meningitis.

With their permission, his autopsy provided important data for the meningitis vaccine that saves so many young people today. Then they were blessed with two other sons, both U.S. Air Force Academy graduates and now a social worker and scientist.

“We thank God for all these years together,” she said.

Maritza Roman-Pavajeau, associate director for Marriage Enrichment and Parenting Education at the Family Life Ministry office, said these couples exemplify what the Golden Jubilee is all about.

“The great values of sacrifice, self-donation and forgiveness need to be present in a marriage. It is obvious that all these participant couples are clear witnesses of those important virtues in life. Living with this grade of faithfulness and other virtues, also assures our way to heaven!” she said.

“Observing marriages like this gives testimony and a perfect example of personal sanctification and also a great sample of the mission of the domestic Church in the world,” said Roman-Pavajeau, who is a marriage coach and consultant with 20 years of experience working with the Archdiocese.