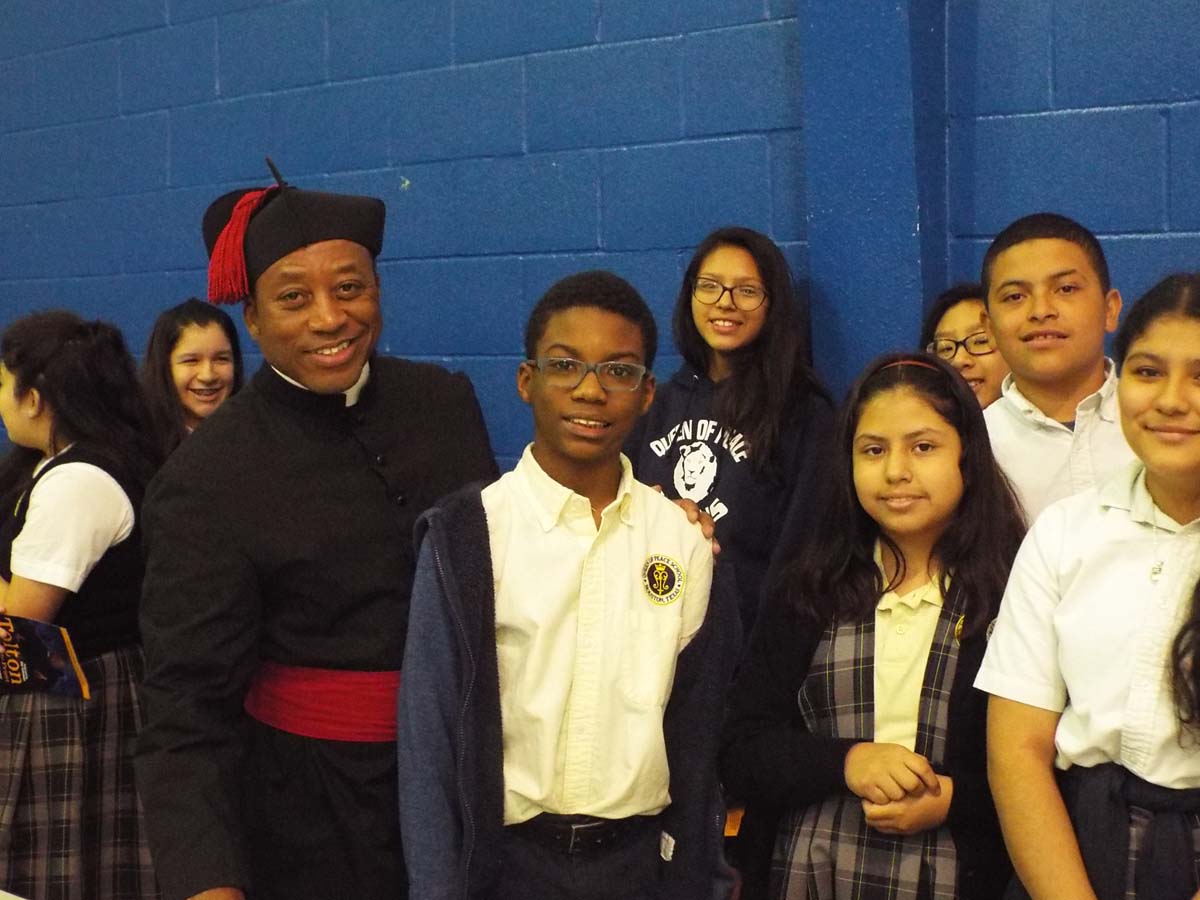 HOUSTON — As the auditorium darkened, 300 students from Inner-City Catholic Schools were riveted to the lit stage when “Tolton: From Slave to Priest” began with the sounds of barking dogs in the background and a family trying to escape into the woods from slavery.

The live theatrical one-man drama, performed by actor Jim Coleman and directed by Leonardo Defilippis of Saint Luke Productions, held the middle school students’ attention March 21 with the compelling true story of Servant of God Father Augustus Tolton, the first African-American Catholic priest. The play interacted with other actors projected on a large screen on stage at Queen of Peace Catholic School.

Born a slave on a Missouri farm in 1854, Father Tolton and his mother risked everything to reach freedom in Illinois. She prayed aloud the “Hail Mary,” over and again as they rowed on a raft down the river. The play pulled no punches, showing how even in the town of Quincy, Illinois, the freed family continued to experience hardships and prejudice. But an Irish priest at the church there encouraged Tolton to attend school and Mass.

“It was the priests of the Church who taught me to pray and to forgive my persecutors,” Father Tolton said. “We should welcome all people into the Church, not send them away.”

A frightening cloaked figure appeared throughout the production, whispering doubts and anger into Father Tolton’s thoughts. When every seminary in the United States rejected him, Father Tolton persevered and was finally accepted to seminary in Rome where he was ordained. He was assigned to return to Illinois and basically worked himself to death, dying at 43 after collapsing from heat exhaustion in Chicago.

The 75-minute production kept the students quiet and entranced until they burst out in applause at the end and several students asked for Coleman’s autograph on their programs.

“It teaches us not to give up on our faith,” said eighth-grader Daniel Loera of Our Lady of Guadalupe Catholic School.

Denisse Vera of Assumption Catholic School said, “It makes me feel like God is always with us.”

Emily Mican, a middle school teacher from Holy Ghost Catholic School, said she will discuss the play in her classes to compare historical societal issues with current issues of racism.

“Many of our students may be sheltered so it is beneficial to show them the struggles,” Mican said.

Father Michael Minifie, CC, Queen of Peace pastor who hosted the production, said, “I’ve read a book on Father Tolton. It and the play are very inspiring. I believe he is a saint.”

Tolton is being considered for beatification and canonization as a saint and has been designated a Servant of God. Bishop Joseph Perry of Chicago, postulator for Father Tolton’s canonization cause, said he hope the Saint Luke’s production helps to bring a “new era of peace, hope and forgiveness in America.”

Coleman, the actor who has also performed in the super-hero movie “Ant-Man” and in the hit Nickelodeon show “My Brother and Me,” said, “I truly feel Father Tolton speaking through me. Everyone needs to hear these words of hope.”

The production also played at Sacred Heart Church in Richmond, and is available for other locations by visiting www.stlukeproductions.com.