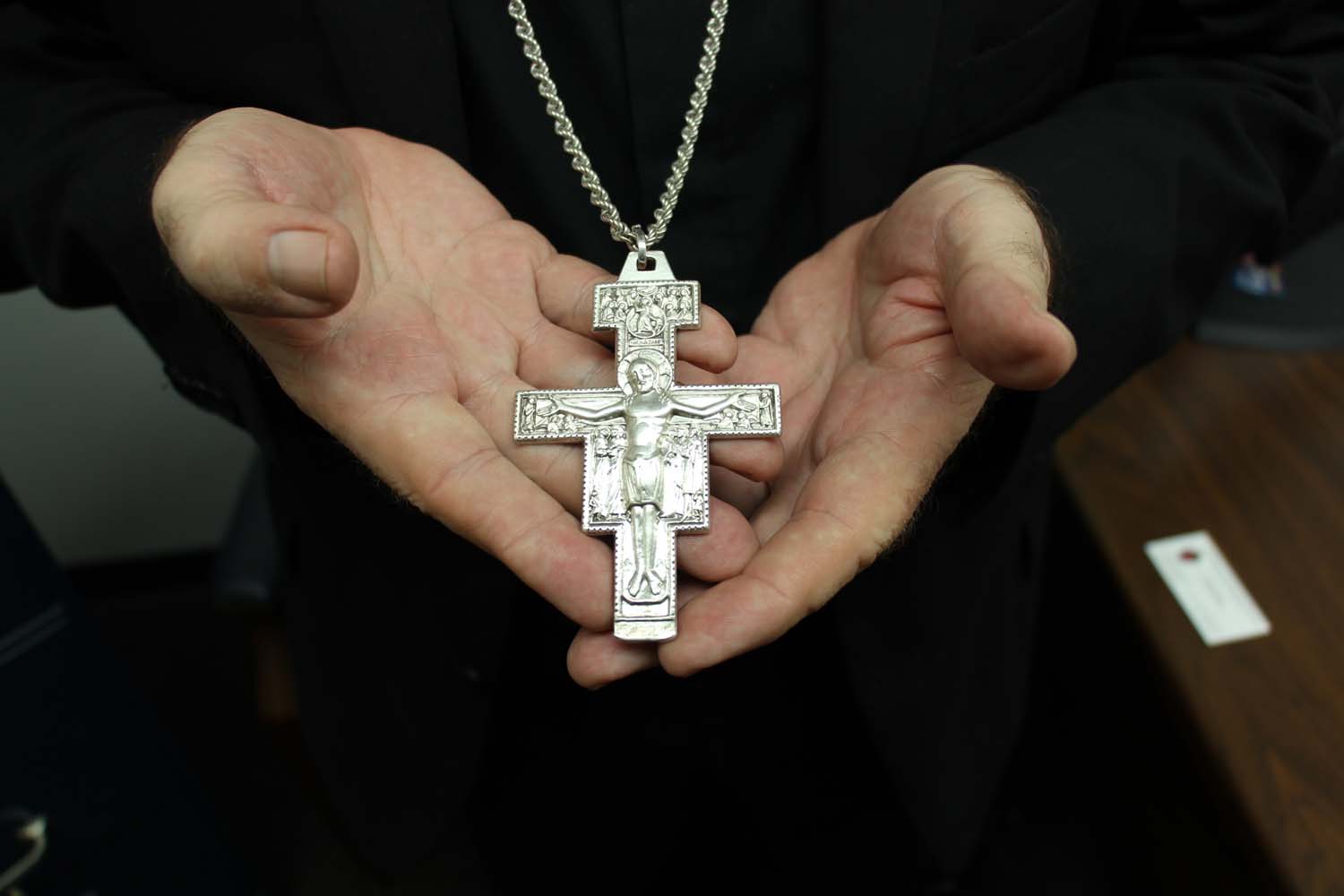 The San Damiano pectoral cross of Bishop Roberto Camilleri Azzopardi, O.F.M. is seen in his hands. Archbishop Azzopardi leads the Diocese of Comayagua in Honduras, which has been a sister-diocese of the Archdiocese of Galveston-Houston since Hurricane Mitch struck Honduras in 1998. (Photo by James Ramos/Herald)

HOUSTON — After Hurricane Mitch, the second-deadliest Atlantic hurricane, struck Honduras in 1998, the Archdiocese of Galveston-Houston joined the other 14 Texas dioceses in adopting the six Honduran dioceses to offer humanitarian, pastoral and financial relief.

Since Mitch, a Category 5 storm that claimed at least 7,000 lives primarily with its floods and mudslides in Central American country’s mountains, Honduras continues to recover from the storm. The hurricane destroyed 70% of the nation’s crops and 70 to 80% of its infrastructure like bridges and roads. 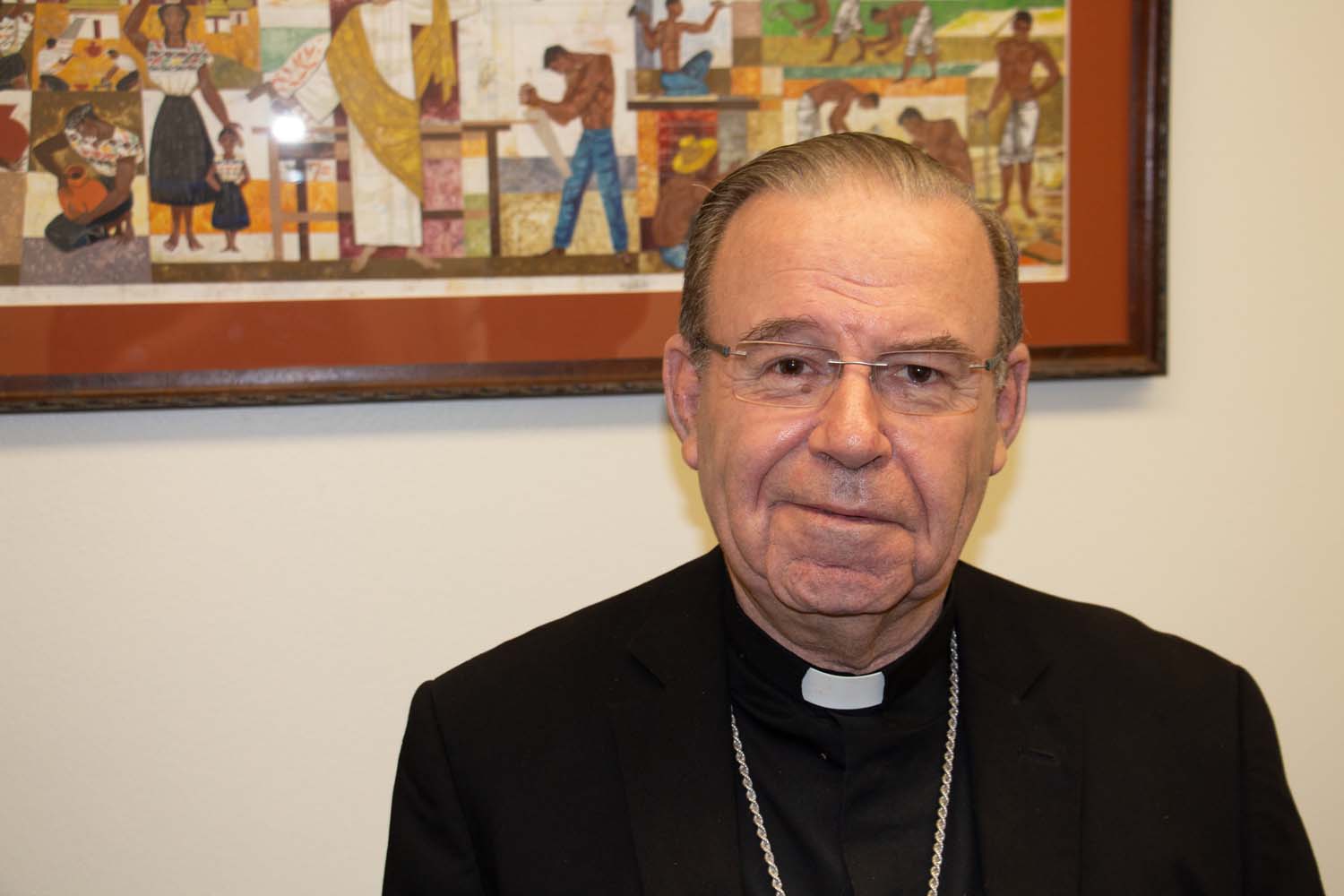 Twenty years later, the Archdiocese still supports the Diocese of Comayagua, which is led by Bishop Roberto Camilleri Azzopardi, O.F.M. Bishop Azzopardi visits the Archdiocese annually to continue the relationship.

“We have seen a great change in Honduras during the last 15 years,” Bishop Azzopardi said during a recent July visit to the Archdiocese. “Not a change for something better, but there was a deteriorating state in the sense that many of the human and Christian values are either being forgotten or not being lived.”

Neighbored by Guatemala, El Salvador and Nicaragua, the Central American country of Honduras of more than 9.2 million is estimated to be nearly half Catholic. With a young population, only 10% being over 55, Honduras is one of the poorest countries in Latin America and has one of the world’s highest murder rates. The country struggles with economic and political crises.

“There was too much violence, extortion, corruption naturally,” Bishop Azzopardi said.

Still, the local Church in Comayagua has seen growth, with the diocese adding nearly one new parish each year, Bishop Azzopardi said. The problem of decreasing numbers of priests is also a reality in Honduras. Comayagua is the only Honduran diocese to have its own seminary, through which Bishop Azzopardi has ordained some 39 priests.

But even with this increased number of newly ordained priests, “it’s a long way to go,” Bishop Azzopardi said. “We need much more priests.”

He encouraged the laity also to become involved with the Church.

“We need more evangelization-oriented laity really doing their part,” he said. “[There are] many ways in how [one] can evangelize: in the family, among young persons, [and] with the adults.”

Catechesis and ongoing formation is a priority in the diocese, he said.

Bishop Azzopardi echoed the message of Pope Francis at World Youth Day 2019 in Panama: The youth “are the generation of the future. Youth are the present, the one present generation.”

The diocese continues to reform its curriculum to minister with the youth and with the ministry leaders themselves, no matter the cost or time, Bishop Azzopardi said. He emphasized that catechesis is a process, that it wasn’t just one sacramental event to another like someone quickly moving from First Communion to Confirmation.

“You never stop,” he said. Those who are in catechesis should “continue now as active members of the Church doing something now in the Church for others. The process of our own growing as Christians is for all our life.”

The Catholic Church in Honduras wants society to improve, so it remains focused on serving those in the pews of its parishes.

“How are things going to change? Those in authority will try to do their best, I know, but still, I believe that change comes from below.”

That change comes from the people who Bishop Azzopardi serves, he said. He witnesses the changes when he visits parishes for confirmations or pastoral visits.

“Change comes from us, especially from the family,” he said. “That’s why I encourage the others who are parents to help their children because the Church is doing what is best to have this process of catechesis where our children are formed to act as more humanly speaking.”

This is why the diocese is committed to supporting the catechesis of its parishioners, he said.

“We work so hard ... because we firmly believe that this will help our people to be better humans, better Christians, better in everything, and of the family. Then when you form the person, it extends to every aspect of life.”

Bishop Azzopardi likened the partnership between the Archdiocese and the Diocese of Comayagua to the accompaniment emphasized in the papacy of Pope Francis.

The 20-year relationship enables Comayagua to minister to the migrants who are either leaving Honduras or are traveling through to reach Mexico and the U.S. in search of a better life.

“[The migrants] don’t leave their country because they’re criminals. They’re in danger and they have to leave,” he said.

“They’re not getting enough income to lead at least a dignified life, no? At least the basics of education, nutrition and, so they try to find something better. Nobody leaves their home for nothing. To immigrate is a right, a human right to immigrate.”

Immigrants coming from the Northern Triangle countries of Honduras, Guatemala and El Salvador take on the journey fleeing gang violence, corrupt governments and poverty because there is no other recourse, according to reports.

This dangerous journey, U.S. bishops have said, is the result of actions that try to keep them from entering what they believe is a safe place have turned traumatic and deadly, particularly for children.

In Comayagua, the diocese has worked to offer income relief to those in need via housing projects.

The housing projects operate alongside water and electricity projects that support those living in Honduras’s rugged mountains that are 80% of the nation’s area and make transportation difficult. Some parishes also operate clinics and a hospital to serve the poor.

Since 1999, Hondurans are permitted Temporary Protected Status (TPS) in the U.S., which, according to the Catholic Legal Immigration Network (CLINIC), is “a life-saving immigration status that allows foreign nationals to remain in the U.S. if during the time they were in the U.S. something catastrophic happened in their country of origin preventing their safe return,” such as war, famine, natural disasters or epidemics.

The status comes from a specific law enacted by Congress in 1990, which now benefits some 300,000 to 400,000 people from countries like El Salvador, Haiti, Nepal, Nicaragua and Syria, among others. Those with TPS status are also permitted to work in the U.S lawfully.

According to CLINIC, TPS changed under the current U.S. president’s administration when the Trump administration terminated 98% of all TPS holders, including Honduras. Generally, TPS designations for countries were regularly extended on a bipartisan basis, especially for countries with long-term designations, such as El Salvador and Honduras. Termination of TPS means that TPS holders would be subject to arrest, detention and deportation.

However, due to ongoing litigation, the termination has been on hold for the 57,000 in the U.S. with TPS status; previously TPS for Honduras was set to terminate Jan. 5, 2020.