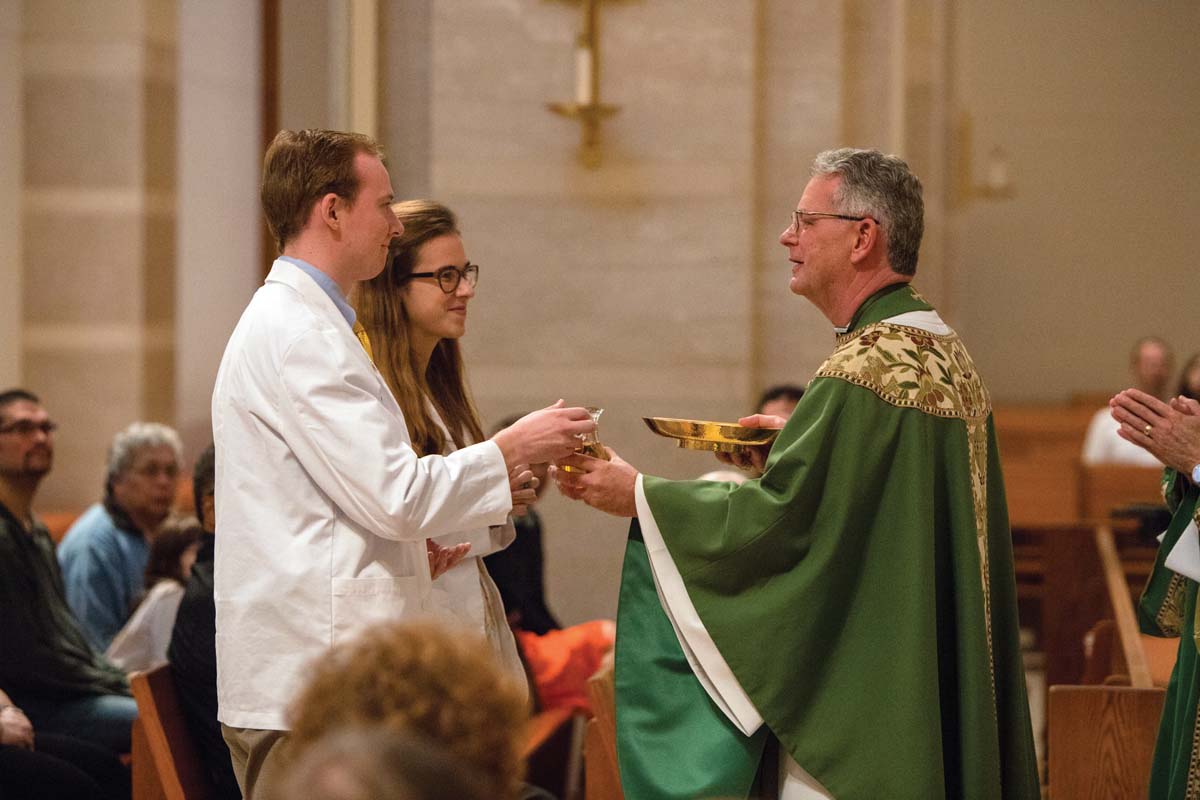 Father Lawrence Jozwiak, rector of the Co-Cathedral of the Sacred Heart in Houston, accepts offertory gifts carried by two members of Galveston-Houston’s large health profession community during the archdiocese’s annual White Mass at the Co-Cathedral of the Sacred Heart Oct. 20. The Mass honors those who work in the healing medical professions, many of whom work in the Texas Medical Center, the largest concentration of medical facilities in the world. Photo by James Ramos/Herald.

HOUSTON — Members of Galveston-Houston’s massive health care and medical communities, including doctors, nurses, medical students and other medical and health care personnel, were encouraged to wear white coats to represent their professions at the annual White Mass at Co-Cathedral of the Sacred Heart in Houston.

White is a symbol in the Catholic Church of hope and comfort to the ill and hospitalized. The Mass honors those who work in the healing medical professions.

Father Lawrence Jozwiak, rector of the Co-Cathedral of the Sacred Heart, was the main celebrant of this year’s Mass Oct. 20, with Father Desmond Daniels of the Archdiocese’s Catholic Chaplain Corps, who ministers at Houston Methodist Hospital, concelebrating.

Many of the area’s health care professionals in attendance serve in the Texas Medical Center, a burgeoning hub that employs more than 106,000 people.

These locations are served by Catholic doctors, nurses and other medical professionals, as well as Catholic priests, chaplains and pastoral care workers.

“The White Mass [is] something that I have enjoyed attending for several years going back to my medical school days and now as a senior fellow soon to graduate from training in my field,” Danielle Schwartz Takacs said. “I think it is enriching experience to see many medical professionals gather together to practice their faith which no doubt plays a role in their daily interactions with patients, families and colleagues.”

In his homily, Father Jozwiak encouraged those who work in health care, including counselors, technicians, therapists, nurses, doctors and the many others who work alongside these professionals.

After the homily, Father Jozwiak offered a special blessing for all medical professionals attending. During the blessing, a litany of the saints was chanted over the members, invoking prayers from patrons of the medical fields, including St. Luke.

Takacs said she enjoyed Father Jozwiak’s homily, and was even able to sing with the choir during the Communion chant.

“I had sung with the choir in the past and it was great to be back in the loft,” she said. “I think that in the increasingly secular world today, every practicing religious person, no matter their occupation, often feels ‘judged’ for their commitment to their faith. It is a balancing act to live as God calls us to, and spread the Gospel to others, while hearing subtle (or not so subtle) attacks on religion and faithful practice from others — which occurs more often than I ever imagined would be the case.”

Takacs said she’s inspired by St. Francis of Assisi’s ubiquitous call to “preach the Gospel at all times.”

“The best thing about being a Catholic doctor is the ability to pray for, and sometimes with, my patients, to trust in God’s plan for them and my own life and career, and most important to have faith in his promise of eternal life for his people,” she said. Takacs is a resident physician in Pediatric Neurology at Baylor College of Medicine. “Without my faith, it would be infinitely harder to tackle the difficult pediatric incurable conditions and end-of-life issues I face in my field, and the varied ethical concerns. My faith has guided me to always strive to practice one of the greatest commandments, to love my neighbor as myself, and this is an important not only for interactions with my patients, their families, but also my colleagues, supervisors, and the entire hospital staff.”

Following the Mass, at a reception and dinner, Dr. Michael Brescia spoke about “The Nature and Treatment of Human Suffering.”

Brescia is a Catholic doctor and co-founder and executive medical director of Calvary Hospital in New York City. He is known for his invention of the arteriovenous fistula, which saves many affected by renal disease, as well as his efforts to support those dealing with end-of-life care at Calvary, the nation’s only facility dedicated to hospice and palliative care for cancer patients.

The City of Houston designated April 17 as San José Clinic Day, honoring the ministry for its efforts erving Houstonians. Daniel Cardinal DiNardo serves on the board of directors for San José Clinic.

An agency of the Archdiocese, San José Clinic has been providing quality healthcare and education to those withlimited access to care since 1922.

It offers primary and specialty medical and dental care as well as vision, laboratory and pharmacy services. The ministry also sponsors the annual Archdiocesan White Mass and is a United Way agency. To learn more about San José Clinic,
visit www.sanjoseclinic.org.