2,100 welcomed at Easter find themselves in the local Church’s story 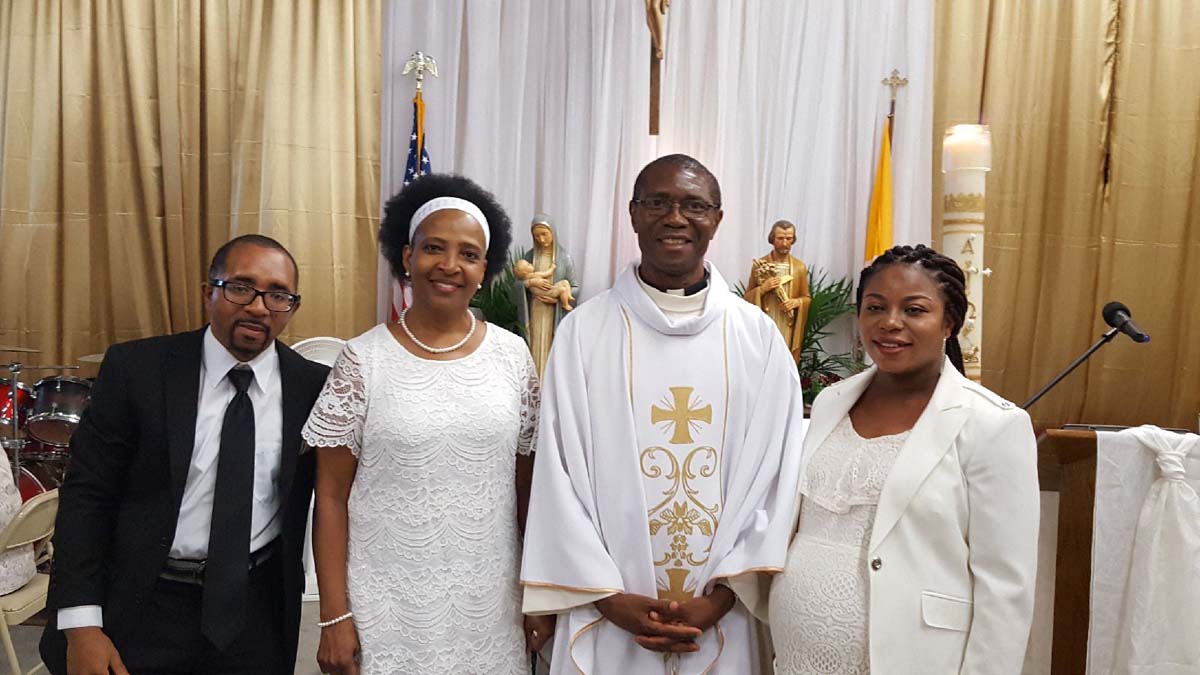 HOUSTON — As Pentecost marked the end of the Easter season, thousands of newly baptized or confirmed Catholics are just beginning their journeys of faith in the Catholic Church.

More than 1,150 were set to receive the Sacrament of Confirmation at eight parishes during a series of Masses throughout the Archdiocese across May 19 to 20 and June 3.

“Acknowledge the gift of life Christ has given us,” said Daniel Cardinal DiNardo in his Easter message. He encouraged people to “look into the empty tomb and proclaim with joy, proclaim with all our hearts and with our lives — that Jesus lives!”

That “gift of life” manifests differently in the lives of the faithful, and most clearly in the stories of the 2,100 who decided to step forward in faith and be baptized or join in full communion with the Catholic Church.

Tina So, originally from Hong Kong, came to Houston right after Hurricane Harvey as part of a family reunion to visit her sister. They lost their father in 2014 and then their mother passed away in 2016, which started So on a serious faith journey toward Catholicism.

“When I was little, I went to Catholic school, but didn’t consider myself Catholic. My mom was Catholic, but did not practice because my dad wasn’t Catholic,” So said of her general acquaintance with the faith.

But the family was blessed to be at their mother’s hospital bedside when she took her last breath.

“That moment I cannot forget for the rest of my life. She did pass, but I felt God’s guidance when our family prepared her funeral. That is one of the reasons I came to RCIA because now I really know that God is always with us,” she said.

In fact, even the timing of coming to Houston in the hurricane aftermath worked for her because churches had to postpone their classes and started later.

“I thought I had to wait for another year. But I was able to register, thanks be to God and to the people at St. Edith Stein (Church in Katy),” So said.

Now she is even more united with her husband, who is Catholic. As a catechumenate, she was baptized, confirmed and received her First Communion on Easter Vigil at St. Edith Stein. “It was such a joy to receive my first Holy Eucharist and I felt very peaceful, thankful and graceful,” she said.

Brittny Smith, born and raised in Houston to parents to Catholic parents from El Salvador, said it wasn’t until she met her late husband, Justin Smith, that she wanted to know God more.

“We started attending Mass for all the major holidays Christmas, Good Friday, Easter,” Smith said. “I became pregnant with my daughter in 2015 and that’s when God really started pulling His strings in me. I knew that I wanted to baptize my daughter and raise her Catholic, but to do that I needed to do it for myself first.” Smith had planned on relying on her husband since he was raised Catholic and a graduate of St. Pius X Catholic High School.

“Then came the worst day of my life October 5, 2016,” Smith said. “My husband had died in a motorcycle accident. We had his funeral at Christ the Redeemer and Father Sean Horrigan, pastor, gave a beautiful service. I will never forget how much he impacted my life that day. Seeing how everything comes full circle, and even as painful as it was, I knew that Christ Redeemer would be my home.”

Smith began Rite of Christian Initiation classes. She enjoyed learning about Catholicism, hearing the concerns of others and also enjoyed the activities planned and discovering how it connected with Mass.

“God truly reached me through the RCIA team,” Smith said. Each person there made me stronger.”
Smith also said her family and her late husband’s family have supported her during the RCIA journey.

“Besides the team, I have had so many family, friends and even people I do not know show me compassion during this time,” Smith said. “All of these people have showed me how Christ has been working in my life.” Smith is grateful that she and her daughter were baptized by Father Horrigan. Smith said the best part of the baptism for her was the moment right before the water touched her head.

“I knew and felt God so strong in my heart,” she said. “I was crying even before Father Sean poured the water. It was very emotional for me because this was something my husband and I talked about so much. To have finally been able to receive my Sacraments was bittersweet. I know Justin was there with me in the moment but still hard to not have him physically here. I pray that I can continue to hold that strength and bond with him until the day I meet him. I cannot begin to say, ‘Thank you’ enough to the church, RCIA and my family. I have found my home.”

Youth looks forward to his future in the Church

Even though Troy Dobecka had been baptized as an infant, he still wanted to “get in the water.”

Dobecka said he loved it and looked forward to every night.

“Many nights I was so excited, “It’s like I had questions, or friends have questioned me about the Church and I didn’t know the answers,” he said. “And I got answers to my questions that night without even asking. I have left this class so proud to become a Catholic and look forward to my role as a Christian in my future.”

Now also a parishioners at Holy Family Parish in Galveston, Kenny Gray said he always wanted to join the Church.

“For as long as I can remember I always wanted to be Catholic, but never seriously reached out to anyone in making it happen,” said Gray. “I have awful anxiety and have let fear stop me from doing many things. Then Christmas of last year, I was alone, for the first time in years, and decided to go to Christmas Mass.”

And that Christmas Mass was the turning point for Gray.

Gray said Deacon Dell’Olio and his wife Miriam were “wonderful teachers of the faith” who guided him on his journey to becoming Catholic.

“The night I was baptized was one of the best times of my life,” said Gray. “I only wish I had done it sooner! I have never felt closer to God than I do now and for that I am truly grateful.”

Kaitlin Rinker, 16, has sensed her baptismal call since she was child during her second open heart surgery.

“I remember I met Jesus and he had said to me, ‘You’ll get through this and remember to fight,’” Rinker said. “At that moment I knew my faith was an important part of my life.” Rinker has had a total of three open heart surgeries over the years and her connection to Christ since then has never faltered.

Rinker has endured physical suffering, and has also been through her parents’ divorce. Even so, Rinker held her faith close to her heart and believes that her faith is what has seen her through all of it. Her stepmother, Jackie Haladay, has been Rinker’s cheerleader when it comes to attending Mass at Christ the Redeemer and staying connected to the Church.

Rinker continued to attend faith formation classes with the parish youth ministry. There, Rinker was inspired to begin exploring RCIA. Haladay then became Rinker’s godmother and RCIA sponsor along with being her stepmother. Haladay has helped Rinker arrive at the baptismal font and has been a source of support and a good example of a Christian witness.

“Jackie and I have been through a lot,” Rinker said. “She is honestly my second mom. She helped me find what I was looking for by taking me to church, Sunday school and reading the Bible with me. Finally, after seven years of waiting, I got my dream because of Jackie’s acts of kindness.”

Rinker’s dream of baptism was realized this Easter and Rinker said it was something she had been waiting for since that second open heart surgery.

“It was breathtaking when we were holding our candles while going into the church,” Rinker said. “The church was dark - the only light (was from) the candles.”

Rinker is glad and excited to have been welcomed into the Church at Easter and looks forward to continue going to the parish’s youth ministry.

She sought healing and found the Catholic Church

Tracy Owen grew up indifferent to religion, but “severe challenges” in life drew her closer to Christianity. After attending church with other denominations, a back injury prompted her to search for Christian meditation, which led her to the rosary.

Learning more about Marian prayer brought her deeper into Catholicism. She soon learned it was “not only totally different” than what she had imagined it to be, but that it was “amazingly rich and glorious.”

“The more I read, the more I wanted,” she said. While Owen found RCIA challenging, she found St. Cecilia Catholic Church, where an RCIA team welcomed her. “Hearing the life experiences of my classmates, sponsor and the team helped me grow in the faith and understand the everyday practice of it,” she said. “The Triduum was a time of great joy and happiness for me, as I was accepted fully into the Church and can receive my Lord in the Eucharist.”

Raised by Protestant parents, she excelled as a classically trained violist, and came to Houston’s Rice University to continue her studies at an undergraduate and graduate level. While she was active in Protestant campus ministries during her undergrad days, C.S. Lewis’ Mere Christianity was the first step towards the Church.

She credits her peers and mentors for challenging her to seek answers, when she eventually met a convert to the Catholic Church who gave her G.K. Chesterton’s The Catholic Church and Conversion. Soon she read Scott Hahn’s Rome Sweet Rome, then it was “game over,” she said.

Wright was confirmed and joined the Catholic Church on Holy Saturday at St. Mary’s Catholic Chapel at the Catholic Newman Center at Rice University. The campus ministry community there rallied around her, and she said she is thankful for her fellow Catholic students who encouraged her.

While her family isn’t happy with her conversion, she said they’re becoming more accepting of her Catholic faith. She’s also glad she had an RCIA class to journey with, calling them her “conversion brothers and sisters. Their lives and witness strengthen my own faith, encouraging me that my conversion was good, and I knew I wasn’t alone.”

Wright said: “I’m so thankful God directed my steps to the Catholic Church. Catholics have such a vast and beautiful treasury, full of goodness, beauty, and truth. Catholics have intimate access to Our Lord in the Eucharist. It’s the Church that Christ founded to show us the sure road to eternal life, and that is relevant in every day and age to every person. Do you want to draw closer to Jesus and have intimacy with Him? Run to the Catholic Church.”