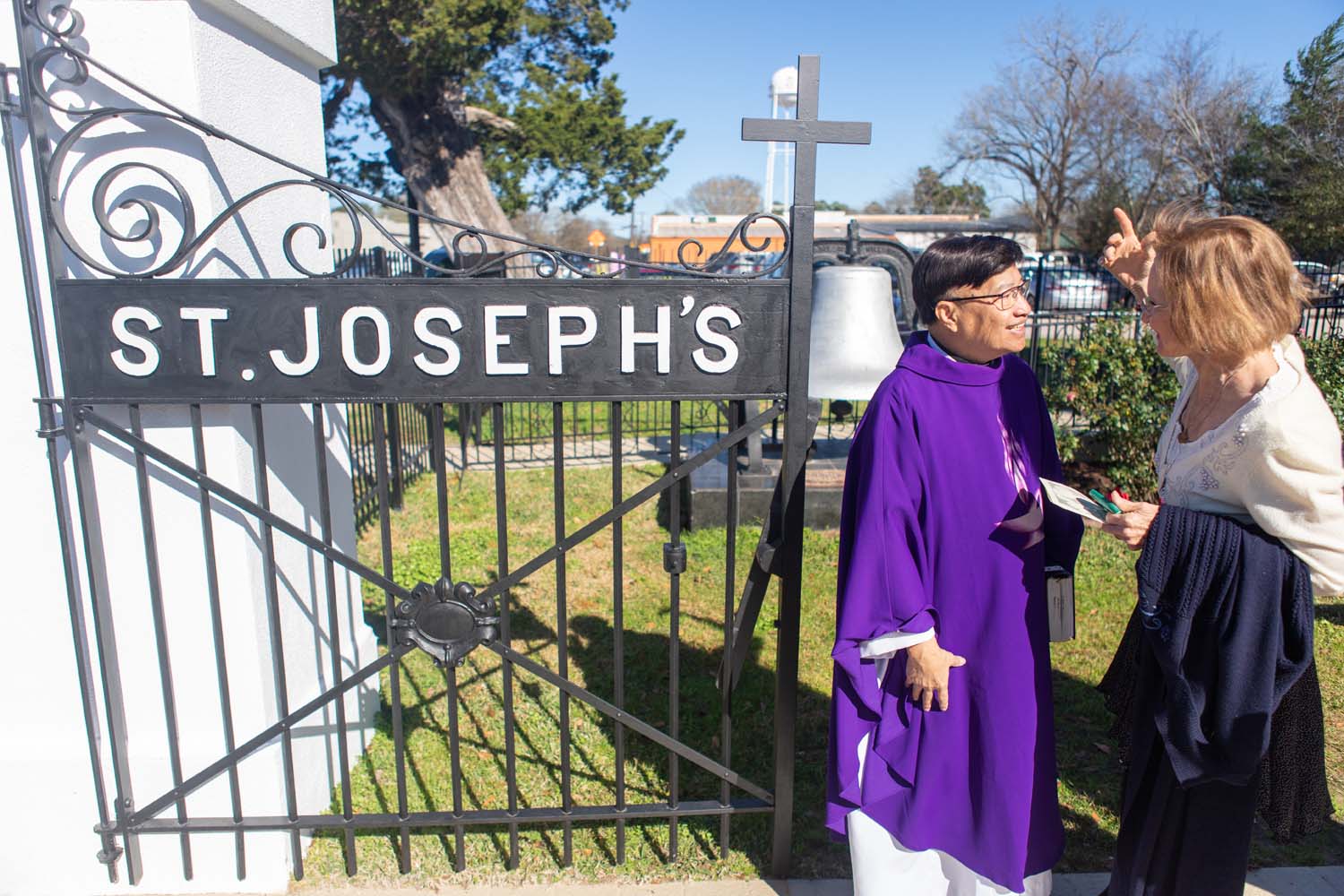 Father Daokim Nguyen, pastor of St. Joseph Catholic Church in New Waverly, greets parishioners after the concelebrating the parish’s 150th anniversary Mass on Dec. 1. Daniel Cardinal DiNardo was the main celebrant for the sesquicentennial Mass for the parish, which was founded by Polish Catholics who emigrated to Texas in the mid-1800s. (Photos by James Ramos/Herald)

NEW WAVERLY — Like an intricately hand painted Polish ‘pisanka’ egg, the history of St. Joseph Catholic Church in New Waverly is intertwined with the history of Polish immigration to Texas. That 150-year history, a legacy that illuminates the story of the Catholic Church in Texas, was recognized at a sesquicentennial anniversary Mass celebrated by Daniel Cardinal DiNardo in the first week of Advent on Dec. 1.

When the sun rose that crisp morning, two original 1906 stained glass windows of the Blessed Virgin Mary and Child Jesus, and St. Joseph shined brightly into the Gothic-inspired church filled with hundreds who were there to honor the efforts of those parishioners who had come before them.

The more than 1,208 households in the parish know “the great duty of historical past,” Cardinal DiNardo said in his homily. They understand the importance of the windows, the statues and “the whole sensibility of a community that knows where it has come from.”

The choir, with longtime organist Clara Malak, led worship in song during the Mass, all while wearing white gowns and purple stoles. Hundreds packed the 1906 church, with dozens standing in the church’s narthex and balcony. A turnout from the Knights of Columbus accompanied the Mass’s processions.

Recognizing that Advent is a season of being “alert and prepared,” Cardinal DiNardo said in his homily that “the burden of change starts within each and every one of the Church members.

“The burden of change always starts with me, and that is Jesus’ point: that we should be alert and prepared,” he said.

And in a 150-year-old parish like St. Joseph, Cardinal DiNardo said he found that to be especially true.

Recalling the Polish immigrants who came in the 1860s and ’70s and formed the parish, Cardinal DiNardo said they did not have “one-tenth of the advantages and amenities we have today, and yet they were strong and pretty sturdy about their faith” and how “they wanted to keep a community sustained in their Catholic faith.”

Cardinal DiNardo said that the faithful now may have the amenities, but they do “not have always the strength of spirit.”

“But we want to pray that those who were our ancestors of the faith will give us the strength of spirit so that New Waverly is always known as a consistent and absorbing Catholic Christian community, that lives the life it professes Sunday after Sunday, every Mass,” Cardinal DiNardo said. “It is time to wake from any kind of sleep that says, ‘Well, let’s wait till tomorrow.’ Advent always says, ‘Today is the day it happens,’ and I would agree with those people.

“Any form of urgency we get usually happens because something personal strikes us,” he said.

Cardinal DiNardo said he hoped the 150th anniversary of St. Joseph in New Waverly would spark a “new urgency” in the parish and that the faithful “will come before the Lord in the next months and years and see this beautiful church, the result of labor, work and faith.”

He encouraged the faithful to build up the young people “because sometimes young people don’t have the example of their elders,” especially in a culture surrounding youth that “can be a trap.”

Elders have lived the faith, rather than just speak about it, Cardinal DiNardo said.

Following the Mass, a reception highlighted the lengthy history of the parish. An exhibit featured original historic photos, documents and artifacts, such as Polish prayer books, school photos and a collection of other media. The Wawel Polish Folk Dancers also performed at the conclusion of the event.

Malak, chair of the sesquicentennial celebration, hosted the event and recognized the numerous people who helped coordinate the event.

Malak said the Polish immigrants “had hope” for a better life.

150 years later, after a “wandering priest” named Father Felix Orzechowski helped organize the parish in 1869, Malak said the celebration remembered and celebrated “the heritage and the faith of this parish. This is truly the day the Lord has made. We are glad and we are rejoicing.”

Distinguished guests included local civic leaders, as well as Robert Rusiecki, consul general at the Consulate General of the Republic of Poland in Houston, who in his address recognized importance of Polish history in Texas and the Catholic Church. Other addresses included a letter from Archbishop Emeritus Joseph A. Fiorenza and a letter of recognition from the White House.

Father Nguyen thanked the parish for embracing his arrival as pastor several years ago. The “rich history” of St. Joseph was a testimony of the “strong faith” of the people who came before.

“We can never thank God enough for our country members that started it all,” he said. He recognized the fact that many of those present at the Mass were the children of the children of those who established the parish. Generations, both who have left New Waverly and those who remained, attended the Mass.

Father Kim encouraged the parishioners to “continue striving to be one family of faith, supporting and building on another.”

“As we celebrate this 150 years, let us realize our obligation to further the work,” he said. “Let us build upon the legacy so that future generations will look back in wonder at what God did for our parish of St. Joseph.”

St. Joseph was the first parish established in Walker County, and just the fourth in the then-Diocese of Galveston, which stretched as far north as the Red River, according to Archdiocesan reports.

Father Orzechowski, a Polish priest who sailed to Texas in 1866, had been ministering to these immigrants, for nearly a decade celebrating Masses outdoors or in houses. Riding on horseback or mule-drawn wagon, he trekked the Texas coast and helped to organize the parish with 42 other Polish families.

In 1876, Father Victor Linicki came to Waverly Station, where the Houston and Great Northern Railroad Company built a railroad station after residents of what became Old Waverly denied the company the right-of-way through their community.

There, in what was eventually named New Waverly, Father Linicki built the first church in 1877 on two lots purchased for $1, contingent that the land be only used for a church and a school. In 1890, due to growth in the Polish population, a larger church was built nearby. A third church was later built to accommodate increased growth.

Then, Father Thomas Bily, a Bohemian immigrant, arrived in 1902 and spent the rest of his life ministering to the Polish communities in New Waverly.

He led the construction of the current church, which was built and dedicated in 1906 and designated a Texas state historical landmark in 1976.

The community honored Father Bily when it named its Knights of Columbus Father Thomas A. Bily Council 5921 and Ladies Auxiliary after the priest.

According to parish officials, Father Bily said the 1906 church was built as “an act of thanksgiving by the people of St. Joseph’s for having been brought together in to a successful community, for having been given a parish, and for having been allowed to live as a free people in a great country.”

Many of the Polish immigrants fled a beloved homeland that had seen much war, strife and partitions. The New World, an ocean away, held much promise and hope for many, including the Polish people, prompting them to make the arduous journey to America.

Eventually, coming to Texas, a Polish community took root and attracted others to make the journey themselves. Several other parishes in the Archdiocese have Polish roots, like St. Stanislaus in Anderson.

An Archdiocesan account called St. Joseph the “mother” of all Polish settlements in Texas. The parish is also the mother church for Sacred Heart in Conroe and St. Thomas the Apostle Catholic Church in Huntsville.

A new chapel was constructed near the original 1906 church in the mid-2000s.

A major restoration effort took place in the mid-1980s. In 2019, ahead of the parish’s anniversary, an $800,000 restoration campaign completely restored the aging wood building’s exterior. More than a century old, the wood had severely deteriorated. Restoration also included the two spires and iconic clocktower and steeple that’s visible all across New Waverly.