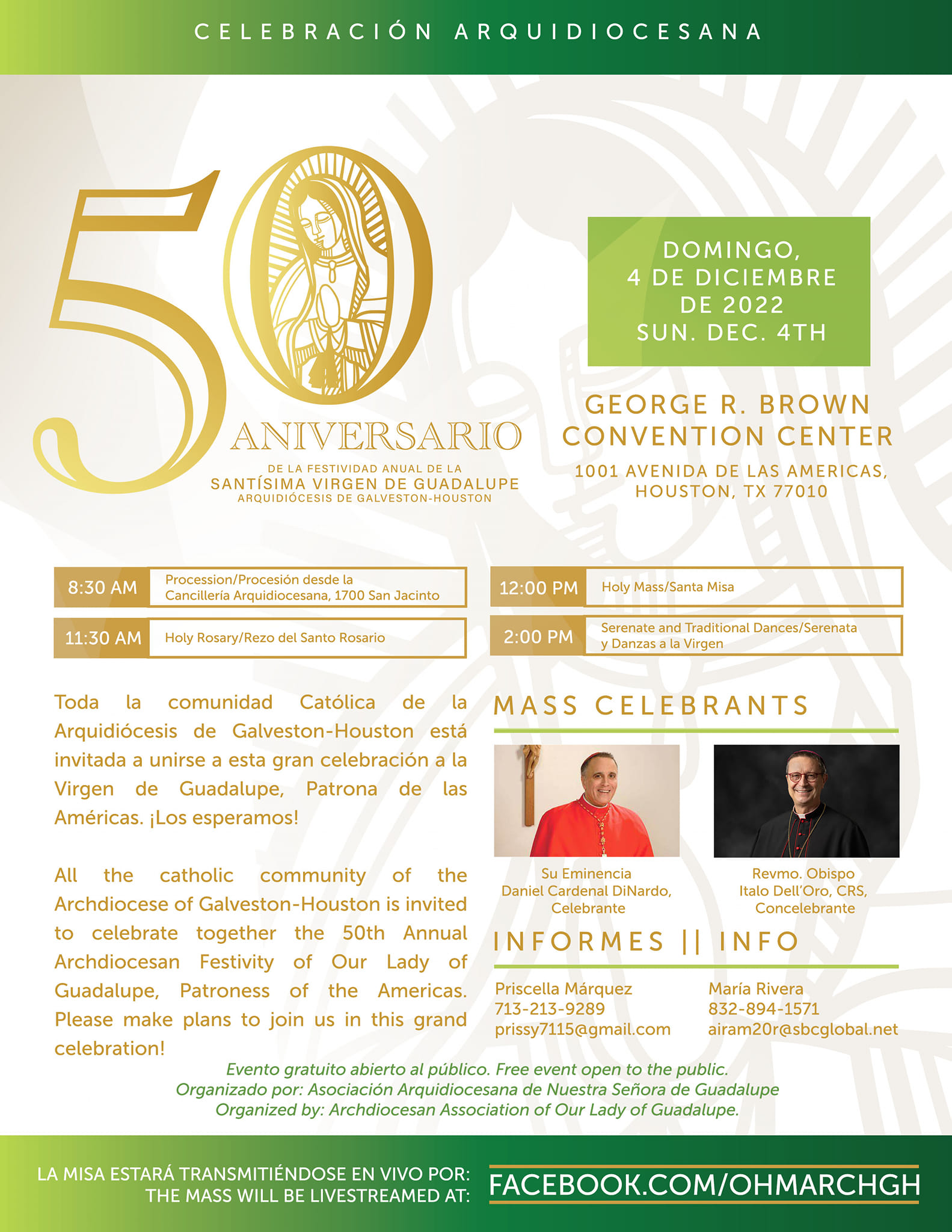 The large downtown Houston parade celebrating the Virgen de Guadalupe Festival is returning full force on Sunday, Dec. 4, the first since the pandemic, with dancers, drummers, and Mass at the George R. Brown Convention Center.

While last year’s celebration was a scaled-down version, this year marks Houston’s 50-year anniversary of commemorating the Virgin Mary appearing as Our Lady of Guadalupe in 1531 to a humble peasant on his way to Mass in what is now Mexico City.

“For our 50th anniversary of celebrating Our Lady and her son Jesus, we are going greater and bigger being back at the convention center and downtown with more public involvement,” said Priscella Marquez of the Archdiocesan Association of Our Lady of Guadalupe, which organizes the event.

The procession will start at 8:30 a.m. in front of the downtown Chancery, 1700 San Jacinto St., with a blessing from Auxiliary Bishop Italo Dell’Oro, CRS. Various Catholic church groups will have their Matachine dancers dressed in Aztec feather headdresses and other colorful costumes swirl through downtown arriving at the George R. Brown Convention Center, 1001 Avenida de las Americas.

A Rosary is scheduled there at 11:30 a.m. while Mass begins at noon with Daniel Cardinal DiNardo as celebrant and Bishop Dell’Oro as concelebrant. Then traditional dances and serenades will be performed starting at 2 p.m.

Lazaro Contreras, director of the Archdiocese Office of Hispanic Ministry, said, “As the Patroness of the Americas, Our Lady of Guadalupe is a symbol of love and understanding, a unifying presence for all of us in the Americas.”

“This event helps families pass on faith and cultural values to younger family members, helping them nurture their spirituality. It also helps others learn more about Our Lady, whom Jesus gave to us as our mother as well,” he said.

The tradition honors the time on Dec. 9, 1531, on a hill of Tepeyac near a village in Mexico when now St. Juan Diego was stopped by the appearance of a brown-skinned woman bathed in light and speaking in his indigenous tongue of Nahuatl. She requested a church to be built on that site to manifest the love of Jesus and hear the petitions of the faithful.

At her bidding, he visited Bishop Juan de Zumarraga, who doubted the story. But Juan Diego met with the Virgin Mary again on Dec. 12, now the official feast day, and she arranged roses within his cloak picked from the hill where only cactus had been growing before. She told him to present the flowers as a gift to the bishop.

When Juan Diego opened his cloak or tilma, the roses tumbled out, and the image of the Virgin Mary was miraculously traced on the coat, which still exists today. Realizing Juan Diego had told him the truth, the bishop began the Basilica of the Virgin of Guadalupe, which led to massive conversions of indigenous to Catholicism. The shrine in Mexico City remains one of the most visited Catholic pilgrimage sites in the world.

Individual parishes will also be celebrating at their churches on Dec. 12, including Our Lady of Guadalupe Catholic Church, 2405 Navigation Blvd. Church staff member Rosario “Rosie” Martinez said parishioners will begin decorating for the festival on Sunday afternoon, Dec. 11, to prepare for a Dec. 12 midnight Mass in the church plaza. Then a morning Mass Dec. 12 will begin with the traditional song Las Mananitas with a Mariachi starting at 5 a.m. and Mass at 6 a.m.