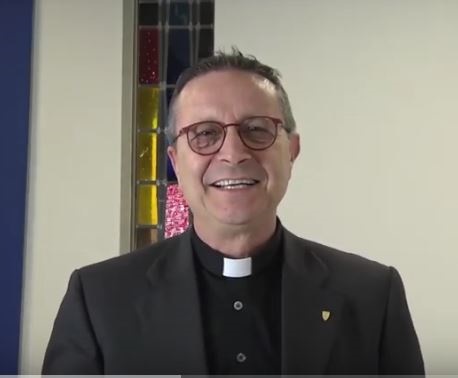 Father Italo Dell’Oro, C.R.S., was named Auxiliary Bishop of the Archdiocese of Galveston-Houston by Pope Francis on May 18.

Bishop-elect Dell’Oro has served as a priest for almost 40 years, 30 of those in the local Archdiocese. Since 2015, he has served as Vicar for Clergy and the Secretariat Director for Clergy Formation and Chaplaincy Services. He was named Vicar General in 2021.

“In all of his years in Galveston-Houston, Bishop-elect Dell'Oro has been a genuine, pastoral presence to the many people and cultures of our great region, along with being a mindful ambassador to the wonderful religious orders and communities in the area,” Cardinal DiNardo said.

When Bishop-elect Dell’Oro first arrived in Galveston-Houston in 1992, his initial assignment was as pastor of Assumption Church in Houston. Growing up in Valmadrera, Italy, the Somascan priest was an avid rock-climber and mountaineer during his teen years on the pristine countryside of Lake Como. He wasn’t familiar with topography of the Bayou City upon arrival.

“When I came to Houston I started looking for mountains, excited to have found near Assumption Church the street named ‘W. Mount Houston,’” he said. “I followed it and found myself in the subdivision Hidden Valley. So I took up jogging, which I still try to do.”

In 2001, he served as Director of Vocations for the Somascan Fathers in Houston before taking on the role of Formation Director in 2014. From 2005 to 2012, he also worked as Director of the Ministry to Priests for Galveston-Houston.

When reflecting on his call to the priesthood: “Although I always felt some sort of attraction to it, as I had for other career options, it was at 15 that the possibility of being ‘called’ dawned on me. A few young men in my home parish left home to enter the seminary, and that impacted me. However, I went on building my life until at 21 and 22 the ‘vocational restlessness’ grew to an unbearable level. I had to do something.”

Somasca, the place where St. Jerome Emiliani organized the first community of followers of the Somascan Order, is a located approximately six miles from Bishop-elect Dell’Oro’s hometown.

“Somasca is a place of pilgrimage, to which devotees to the saint come from the surrounding area — the most famous being the little boy Giuseppe Roncalli, now St. John XXIII,” he said. “I would bike with my cousins to Somasca … but I didn’t know about the Somascans as a boy. During my discernment, however, a very good friend of mine, one of those who had left home years earlier, became very persistent in telling me that I needed to make a decision about my vocation. He was with the Somascan Fathers. Well, in the end I knocked at that door and it opened.”