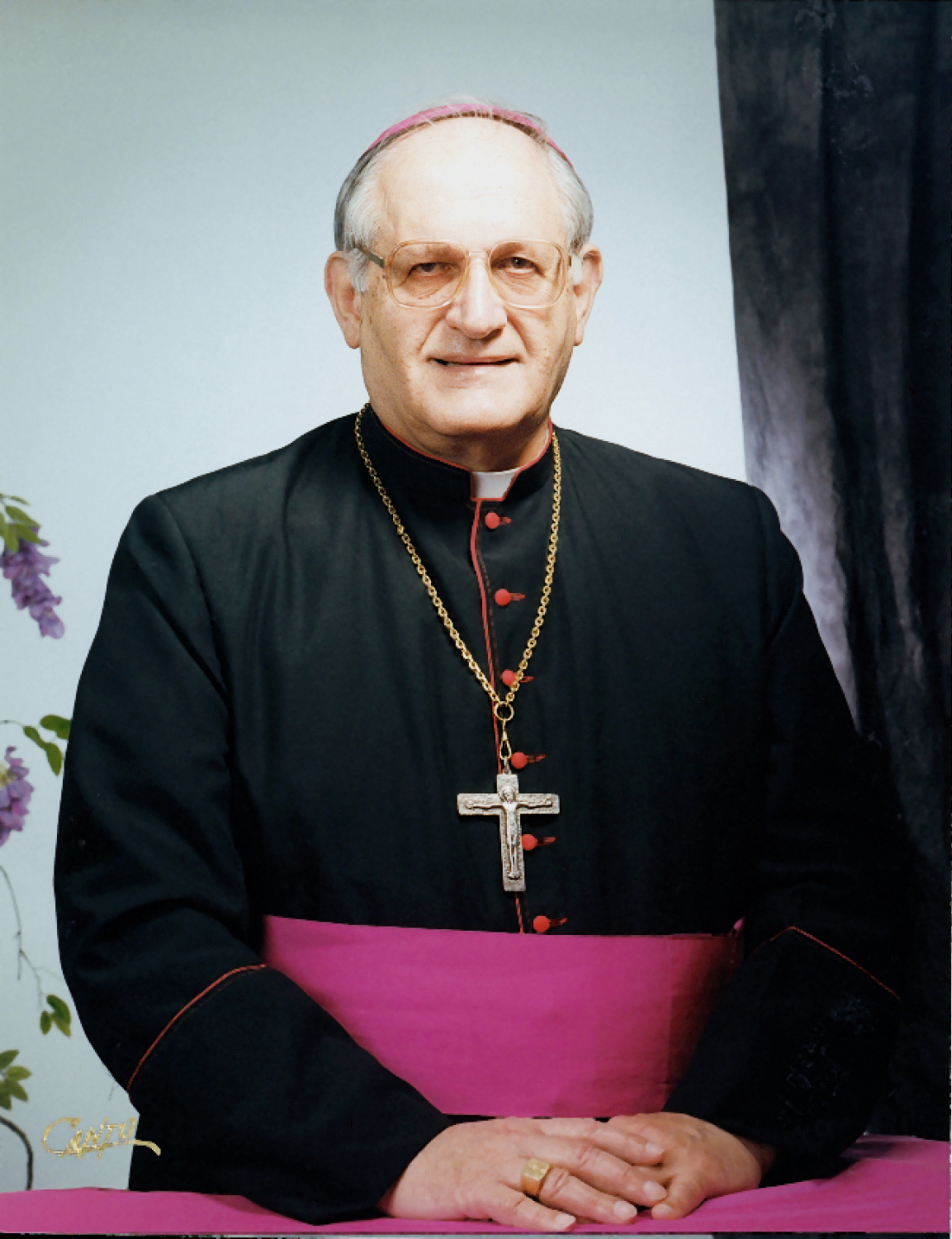 Archbishop Emeritus Joseph A. Fiorenza, the long-time bishop of Galveston-Houston and a tireless social justice advocate throughout his priesthood, episcopacy and in retirement, died September 19, 2022. He was 91.

The Beaumont native served as bishop of the Diocese of Galveston-Houston from 1985 to 2006 and was made Archbishop in 2004, when the diocese was elevated to the status of archdiocese by St. Pope John Paul II.

“Archbishop Fiorenza was known to be a champion of civil rights and a tireless worker in overcoming the presence of racism in our community. He was also known as a great promoter of genuine renewal in the Church, and in making the teachings of the Second Vatican Council known,” said Daniel Cardinal DiNardo, Archbishop of Galveston-Houston.

Cardinal DiNardo succeeded Archbishop Fiorenza as Archbishop of Galveston-Houston in 2006.

The Solemn Reception of the Body, the Vigil Service and Funeral Mass will be livestreamed on the Archdiocesan website at www.archgh.org/live

Due to the space limitations of the Co-Cathedral of the Sacred Heart for the Funeral Mass, we are encouraging the public to honor the Archbishop with your presence while the Archbishop is lying in state throughout the day on Wednesday or that evening at the Vigil Service.

Above all else, the Faithful of the Archdiocese and of the whole Church are invited to pray for the repose of the soul of Archbishop Fiorenza, and for the consolation of his family and many friends in this time of grief.

Eternal rest, grant unto him, O Lord.
And let perpetual light shine upon him.
May he rest in peace.
Amen.

“Archbishop Fiorenza was an extraordinary soul and decent man. His service to the diocese and to those who lived beyond it knew that he cared about them unconditionally. My predecessor, Rabbi Samuel Karff, of blessed memory, considered Archbishop Fiorenza to be a partner in sacred work with Rev. Lawson, lovingly known as the Three Wise Men, or the Three Amigos. Likewise, when Rabbi Karff died and I became a third Amigo with Rev. Lawson, Archbishop continued to embrace me as he embraced Sam. There was always more to do to improve the community entrusted to us. In heaven, Archbishop Fiorenza and Rabbi Karff will assist God in all that needs to be done. Now, as it was on earth, so it is above and beyond, Archbishop’s blessing will be with us.

Baruch Dayan HaEmet, Praised is the Judge of Truth.”

Rev. William A. "Bill" Lawson, who is pastor emeritus of Wheeler Avenue Baptist Church and a long-time friend of Archbishop Fiorenza shared this message to the Archdiocese:

“My friendship with Archbishop Joseph A. Fiorenza was a genuine one. I respect his title, but to me, he was always “Joe.” He shared my values to “Love the Lord your God with all your heart and with all your soul and with all your strength and with all your mind and that we should love our neighbor as ourselves” (Luke 10:27). His leadership among the Catholic Bishops of America, and even his extraordinary involvement in the construction and planning of the Co-Cathedral of the Sacred Heart, are a testament to his skills of collaboration.

In service to our faiths and shared values, Joe and I, along with the late Rabbi Samuel Karff, did our best to humbly answer the call in Isaiah (1:17) to do good, seek justice, and defend the oppressed. We worked to de-segregate Houston's schools and businesses, created alliances to provide solutions for Houston's homeless, committed to increase Harris County's responsiveness to the legal needs of the indigent and even labored to create a vision for age-friendly care which supports seniors who need geriatric services.

Joe spoke in a quiet voice, but he was a strong presence wherever he went.

My prayers are with the Fiorenza family and the many persons who, like me, loved him. I will always miss him.”

Archbishop José H. Gomez of Los Angeles and president of the U.S. Conference of Catholic Bishops issued the following statement on the passing of Archbishop Fiorenza:

“It was with great sadness that I learned of the passing of His Excellency, Joseph Fiorenza, the archbishop emeritus of Galveston-Houston. Archbishop Fiorenza led the bishops’ conference from 1998-2001 as president, and those who worked with him have expressed that his leadership embodied his love, dedication, and tireless service to the Church. I offer my prayers and sympathy to Archbishop Fiorenza’s family, friends, and the many people whose lives he touched through his ministry over the years as a priest, and then as bishop. May the Lord grant him eternal rest.”

“I lost a cherished friend & mentor with the death of Archbishop Fiorenza. I was lucky to work with him as his Vice-President of the USCCB. His love for everyone in the Church was legendary. His Texas-sized heart - his home state brimmed over with love.”

City of Houston Mayor Sylvester Turner shared this statement on the passing of Archbishop Fiorenza:

“The City of Houston is better today because of the leadership and presence of Archbishop Emeritus Joseph A. Fiorenza. He was a man of devout faith, who walked with quiet confidence, but his countenance spoke volumes over the years.

Archbishop Fiorenza was the first Archbishop of Galveston-Houston and advocated for social justice issues, interfaith collaborations, and people of all socio-economic backgrounds. As part of his enduring legacy, he touched countless lives through his work to build the Co-Cathedral of the Sacred Heart– Downtown and served as President of the United States Conference of Catholic Bishops.

As the head of the Archdiocese of Galveston-Houston, he was a steadfast supporter of the "least of these" in our community. Unsurprisingly, he marched with Martin Luther King, Jr., in 1965 to support marchers seeking voting rights and promoting nonviolent change.

He was one of the “Three Amigos,” along with the late Rabbi Samuel E. Karff and Pastor William A. Lawson, who represented major pillars in our community.

Together, they were the quiet voices of reason, understanding, cooperation, and collaboration. Over the years, they represented the threads instrumental in keeping a diverse city together. Several times during my administration, all three have sat around my conference table or provided me with words of wisdom on a conference call.

In 2018, Archbishop Fiorenza agreed to serve as an honorary chair of the Mayor's Task Force on Policing Reform. He demonstrated his unwavering commitment and courage to work for peace and unity. He was instrumental in bringing people together regardless of religion or politics.

In 2018, I was honored to co-chair a ceremony celebrating the Archbishop for receiving the Spirit of Francis award as an individual who shares the vision of three monumental men - St. Francis of Assisi, Pope Francis, and the organization's founder Father Francis Clement Kelley.
In Joseph A. Fiorenza, God sent us one of his best ambassadors. He worked to lift others and lead them to their salvation. He kept the faith, finished the course, and his work is done, and today, God called him home.”

Regina Rogers of the Anti-Defamation League's Coalition for Mutual Respect shared this statement upon the passing of Archbishop Fiorenza:

“We are very saddened by the passing of our beloved Archbishop Joseph A. Fiorenza, one of the founders of our ADL’s Coalition for Mutual Respect 27 years ago.

The Archbishop's leadership, wisdom and extraordinary commitment were important from inception when he said, “The civility and tranquility of our city depend on mutual respect among all if its citizens. Any efforts to increase understanding and human dignity deserve city-wide support.”

With founding members Reverend William A. Lawson and Rabbi Samuel E. Karff, Archbishop Fiorenza was the third pillar of the Coalition’s cherished “Three Amigos,” who shared an impactful friendship that reflected love and harmony. The Three Amigos helped break down walls of divisiveness at the grassroots level and build relationships among people of different faiths and backgrounds. When Rabbi Karff passed away, they asked his successor Rabbi David Lyon to join them in their continued work to eradicate prejudice and hatred.

From marching in Selma to his role as a spiritual leader, Archbishop Fiorenza was a staunch supporter of human rights and passionate about causes involving social justice and equality. He also was a proud participant in Coalition interfaith exchanges and Nights of Harmony, always speaking out against any form of discrimination.

Today, September 19, would have been Rabbi Karff’s 91st birthday, and we are comforted by the vision of their reunion and celebration in heaven.

The 37 other members of our Coalition join me in extending our sympathies and love to the Archbishop’s family and friends, the diocese and thousands of individuals who did not know him personally but also are mourning his passing,

May the Archbishop’s legacy and life continue to be a blessing for all.”

“My heart is with the loved ones of Archbishop Emeritus Joseph A. Fiorenza. His endless dedication to social justice, advocacy, and commitment to diversity will be remembered. Let’s continue in his footsteps to make this world a better place.”