‘You are called': Bishops witness 1,800-plus continue journey to Easter Sacraments

HOUSTON — On March 1, Daniel Cardinal DiNardo and Auxiliary Bishop George A. Sheltz celebrated the Rite of Election for those preparing to enter the Catholic Church at Easter.

At the four parishes, during the Rite of Election, the catechumens — those who will be Baptized, Confirmed and receive their First Communion this Easter — are presented with their Godparents to the bishops and the faith community. The faithful taking this next step in their journey represented a cross-section of the Archdiocese, diverse in age, race, ethnicity and background.

After the catechumens publicly affirmed their intention to join the Church, the bishops, on behalf of the Church, accept or “elect” them as being ready to take part in the Sacraments of Initiation.

“Today, on this journey, the Church looks at you as you put your names into the Book and says: ‘You’re called.’ You’re one of the elect,” Cardinal DiNardo said in his homily at St. Ignatius of Loyola. “From now on, and for the next 40 days up until Holy Saturday, you’re special, very special. We pray for you every day in Church because you’re the catechumens. You are the elect and the candidates, really significant.” 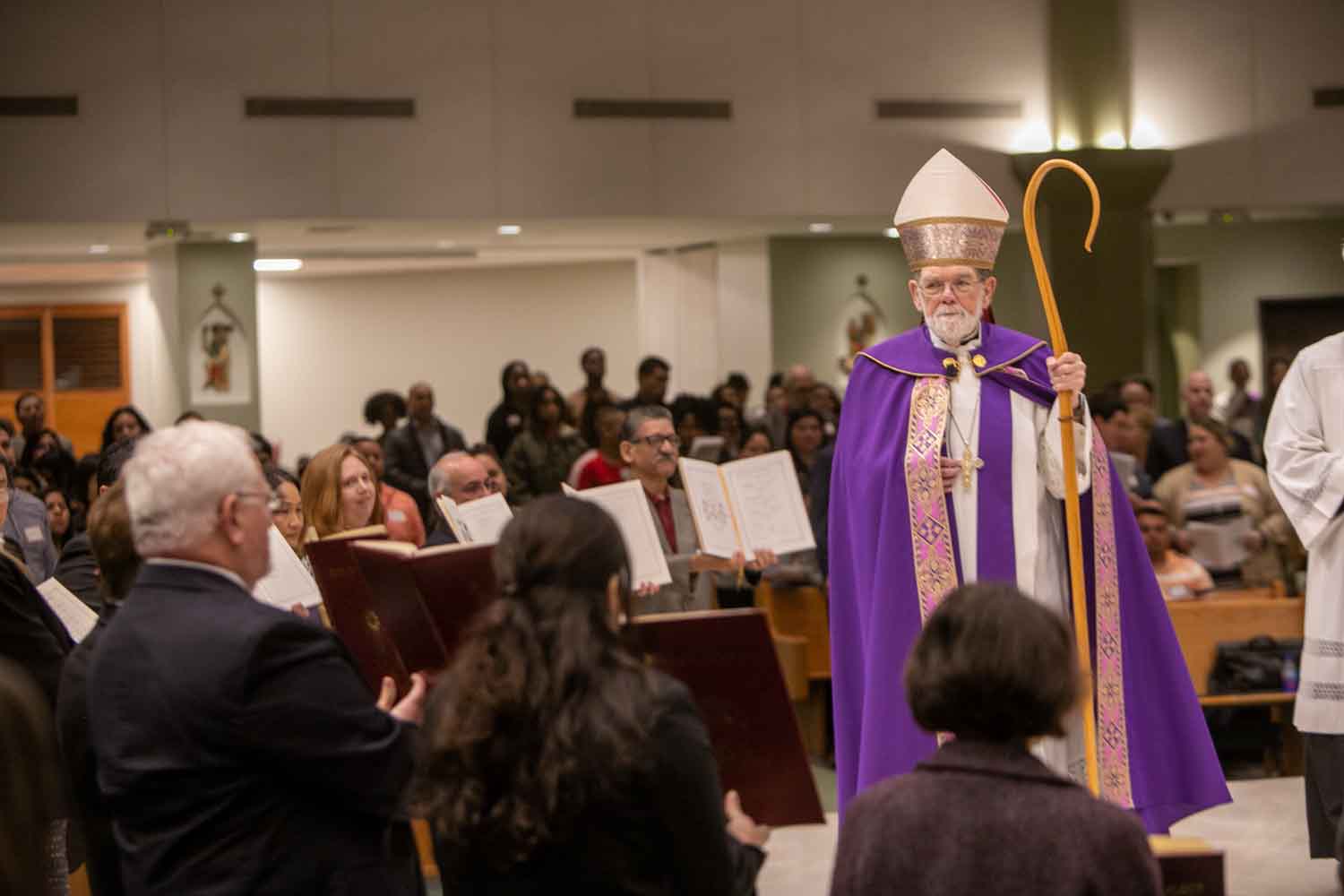 Following the Rite of Election, the catechumens, now known as “the elect,” begin a period of purification and enlightenment, which is the final, intense preparation for the reception of the Sacraments of Initiation during the Easter Vigil.

Cardinal DiNardo also called them to reflect, asking them to consider what brought them to that point in their faith journey.

“Look over the life of the past few years. Look over your life. What brought me to this? Was it another person? Was it an event? Who knows what it was,” he said. “Maybe during this Lent, you might think about that, and pray for those who brought you to this moment. Perhaps it was the catechist. Perhaps it was a relative. Who knows?

“But you’re here today. This is beautiful. This is faith. Today your faith is in the Church because we will have your names recorded in the Book of the Elect.”

To candidates, or those already baptized in a Christian faith, Cardinal DiNardo recognized their journey.

“You have reached the point where you want to come to the fullness of Catholic faith — of being confirmed and receiving your First Communion at Easter,” he said. “I do know that the faith in which you were baptized is also a very beautiful faith. Your own journey has led you to the Catholic faith now, and for that, we are deeply grateful.”

Then Cardinal DiNardo emphasized that while the milestone of the Rite of Election is important, the journey ahead would not be so easy. He encouraged them to also persevere in faith. 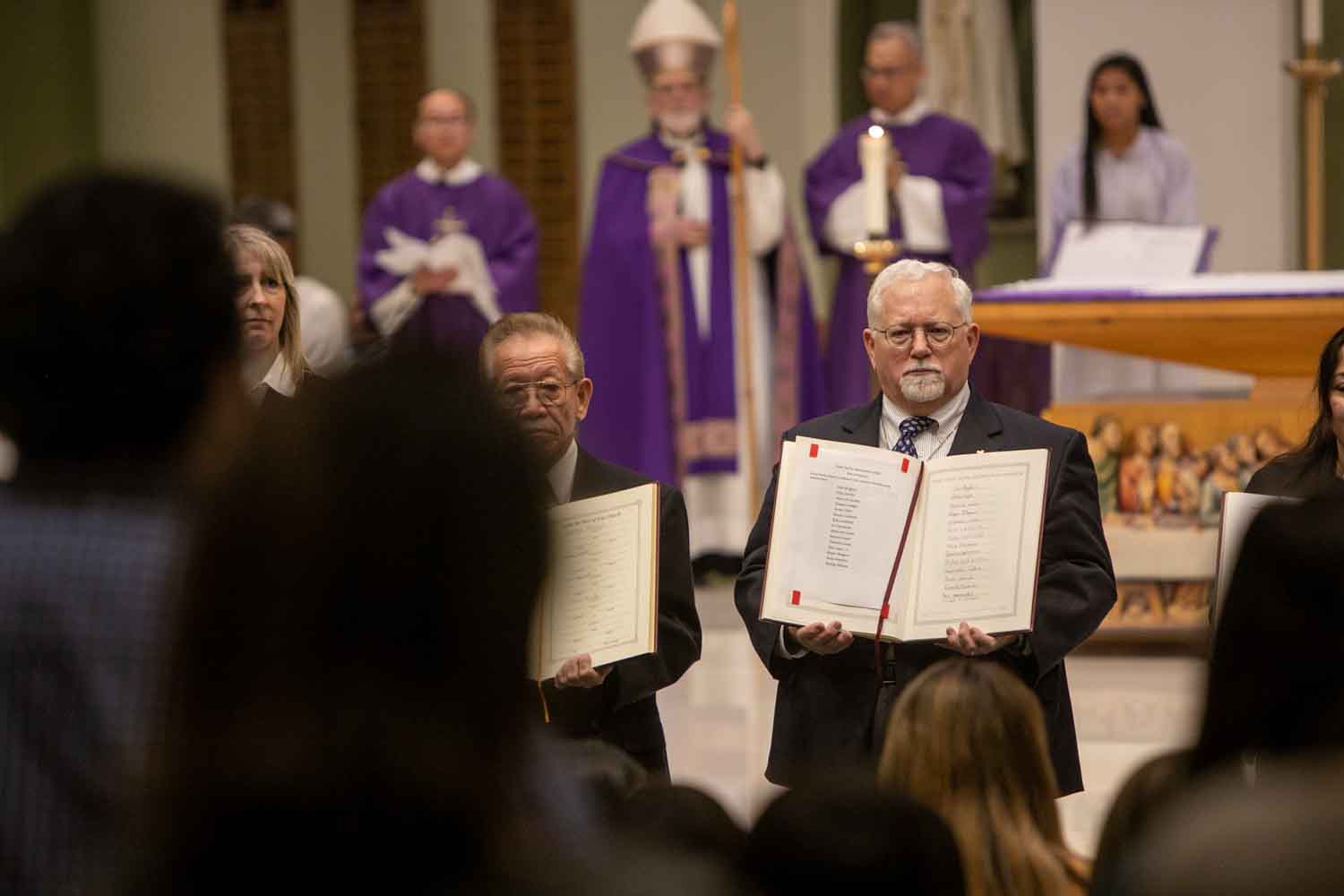 “In the next 40 days, you may be tempted to all kinds of things,” he said. “I beg you to stick with the Lord and, what St. Mark’s Gospel says: ‘Repent, believe the Gospel.’ Believe the Gospel is surrounding you with joy and hope and who are praying for you. We are all praying for you. Pray for those who have brought you this far. And cooperate with God’s grace. It’s beautiful.”

Cardinal DiNardo asked them to “pray for the whole church here in the following weeks. That we too come to Easter saying, indeed, Christ has died for us and Christ has risen.”

Later that evening at Christ the Incarnate Word, Bishop Sheltz said it was an honor for him to celebrate the Rite of Election with them.

“It’s very beautiful to see so many people come out, and to be here it’s a real booster of our community here in Galveston-Houston,” he said. “We have so many different nationalities, if we did it in every language, we’d be here all night long. It is a great privilege to be here with you. I’m truly blessed. You who are to be baptized, you will see the great waters of new life. You will also be able to be filled with the Holy Spirit in Confirmation. Then you will have that ultimate relationship with God in Communion.”

Bishop Sheltz assured those candidates and catechumens that night of his continued prayers at each Mass he celebrates in the future.

During Easter Vigil Masses on Saturday, April 11, at least 1,827 people from parishes across the Archdiocese will enter into the Catholic Church.