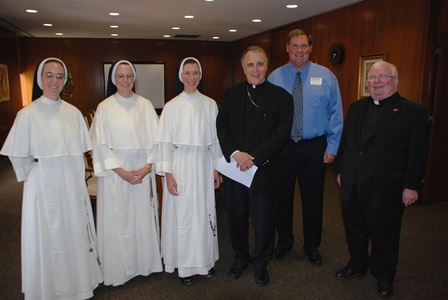 Photo by Jonah Dycus/Archdiocese of Galveston-Houston

Members of the Dominican Sisters of Saint Cecilia Congregation met with Daniel Cardinal DiNardo on Sept. 2. The Dominicans (from Nashville, Tenn.) will serve as administrators of Frassati Catholic High School, named for Blessed Pier Giorgio Frassati. The school is scheduled to open in 2013 and will be located in Spring, about 3 miles west of Interstate 45 and immediately south of the planned Houston Grand Parkway (SH 99). The school will serve grades 9 to 12.

Blessed Frassati was born in Turin, Italy in 1901. An active member in the St. Vincent de Paul Society, he went into the poorest parts of Turin to bring food, medicine, and joy to the poor. By the time he was 21, he was secretly supporting over 125 families from his own resources. When he died after contracting polio at the age of 24, thousands attended his funeral, and it was only then that his family realized what appeared to be the normal life of a student was that of a saint.