Painting a picture of a post-Roe world 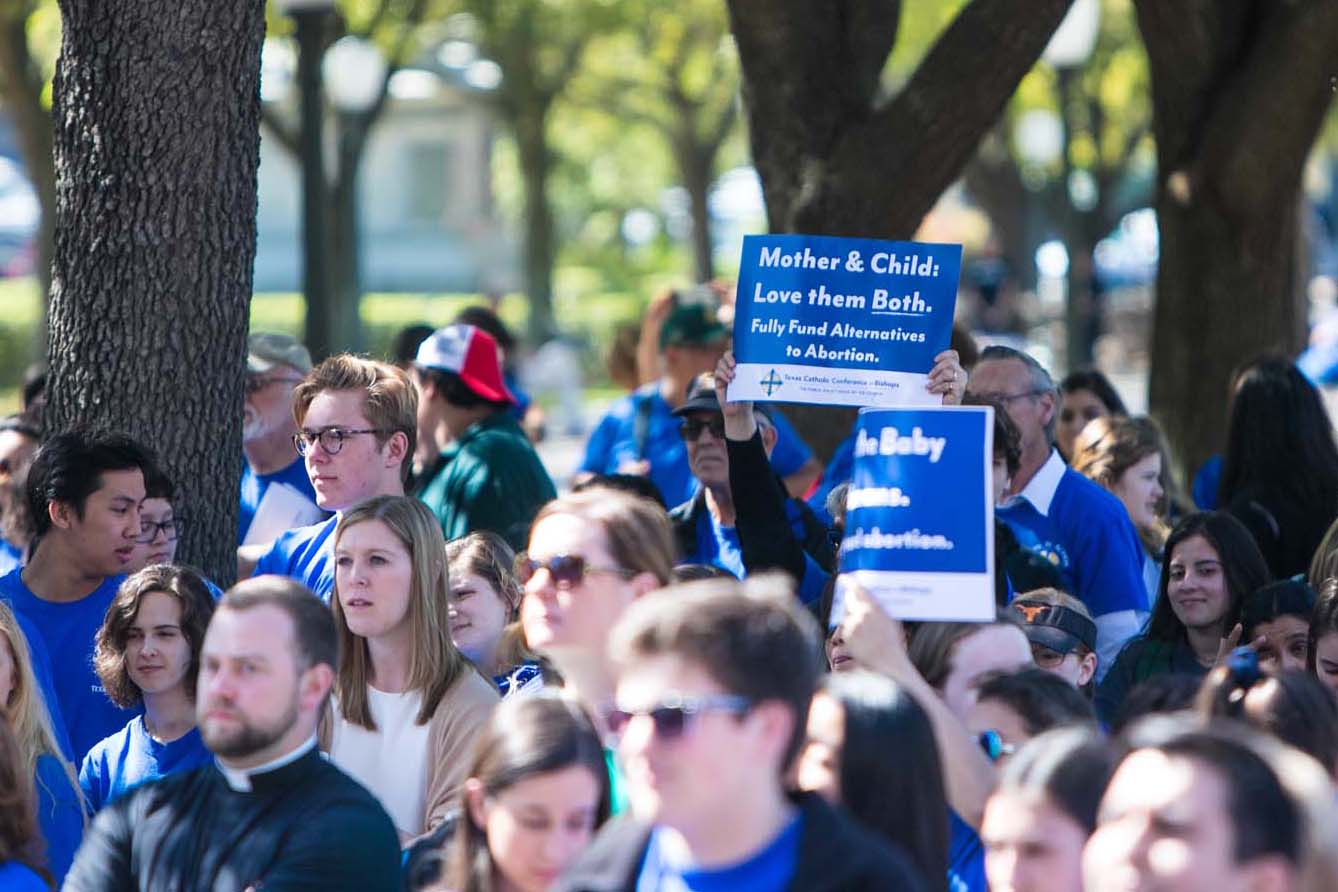 Attendees at a past Advocacy Day rally at the Texas State Capitol in Austin hold signs calling for abortion alternatives.  (Photo by James Ramos/Herald)

The following is part of a conversation which took place between Daniel Cardinal DiNardo and Julie Fritsch Dumalet, director of Pro-life Activities for the Archdiocese. It is reproduced here to help encourage more conversation on these important topics from the perspective of the Catholic faith and should not be seen as a definitive or final word on these themes. Further, as a conversation, it does not reflect all aspects which need to be addressed when dealing with these sensitive topics.

Cardinal DiNardo: Julie, we’ve been talking together, and one thing seems evident, the question of abortion is not over, even in Texas. The Dobbs decision was important and good in returning the abortion question back to the states and in affirming that abortion is not a civil or natural right. That’s important, and that ruling has certainly led to anger on the part of those who disagree about the nature of abortion.
What we can say and want to say is how important it is now to match the clarity of Church teaching on this issue with the charity of assistance to mothers and families struggling with difficult situations.

Fritsch Dumalet: The anger is definitely there, but we’re seeing a lot of positive energy around this issue as well. In the three or four weeks since the Dobbs decision, we’ve seen a significant increase in numbers of moms reaching out to the Gabriel Project for pregnancy and parenting assistance; our parish teams are recognizing the increased need and are in the process of starting new programs or recruiting new volunteers for existing programs.
I think for many people in the past, there may have been a stigma or fear of backlash in identifying oneself as pro-life. From what I’ve seen, Dobbs seems to have empowered many to say, “I’ve always been pro-life. This is what I believe. How can I help? How can I get involved?’”

Cardinal DiNardo: Which is very good. I think what the Supreme Court was able to do was to pull the rug under a presupposition many people have today that everyone has a right to personal autonomy. But there really is no “right to autonomy.” Freedom is not the same thing as autonomy. And I think that’s what has made some people, not all, but some to become so angry because of the perception that autonomy has been lost.

Fritsch Dumalet: St. John Paul II said freedom is not the right to do whatever you want. Freedom is the right to do what you ought to do. And when we talk about who we are as people, as God’s creation, we are not primarily individuals. We are primarily communal beings.
Decisions like Roe v. Wade separate us from each other. They separate mother from child. They separate men from women. Roe v. Wade really strikes at the most fundamental communal relationship, that of a mother and her child but also at a mother’s right to expect that others will support her in caring for that child.

Cardinal DiNardo: In Catholic teaching, the word we use to describe who we are both as individuals and related to others is the word “person.” Persons always involve a relationship, first with God, but then with one another.
Persons are related. The Roe v. Wade decision, which Dobbs overturned, scattered people into their own autonomous, libertarian mode of existence. The new decision of the Supreme Court brings us back together as a civil society to talk about these matters. It makes us responsible for one another. And therefore, the Church’s role in supporting those who are expecting children, pregnant women, and families needing support, will continue, and even expand. Our mission also will require us to persuade people of the rightness of our arguments.

Fritsch Dumalet: I recently spoke with a young adult group at a parish. They were very engaged and very excited, but also felt a bit of trepidation around this topic; there is confusion about how to talk to people who disagree. There’s so much anger and so much vitriol. In speaking with these young people, I was encouraged about how they wanted to get involved with a number of programs like Walking with Moms In Need. In this diocese, because we’re blessed with so many pregnancy and infancy health resources, we are looking to expand the pro-life movement beyond pregnancy and infancy to help parents at all stages of life.
And then, of course, we’re also taking a closer look at the St. Joseph Ministry, which is a ministry of the Texas Bishops Conference, to expand our assistance to children in foster care and to foster families. And we know there’s a big need in Texas to assist in that way.

Cardinal DiNardo: I think this expansion is very good. We take the decision to overturn Roe v. Wade, and we move with it to make pro-life even better than we’ve had it.

Fritsch Dumalet: I completely agree with that. We have an opening now to say, “Let’s go beyond what we’ve already done in our parish communities, providing essential material needs and support.” We have an opportunity to think more broadly about building a culture of life, which also means asking questions about social policies. Do our policies in the workplace support families? Do our policies in terms of healthcare support families?

Cardinal DiNardo: I also believe that we have to reeducate and form in the best way our own people on the meaning of personal human life, the meaning of what happens at conception, the meaning of why the Church has been so forceful in speaking about this issue when nobody else was talking about it. Perhaps our people have grown so used to hearing us that they may have become immune to the argument.

Fritsch Dumalet: Abortion has been a national issue for almost 50 years now. There’s a natural tendency over that length of time to become complacent about an issue. “This is how it’s always been. I don’t like it, but what can I do about it?” That type of thing.
Even people that are strongly pro-life and that have volunteered with the pro-life movement can become burned out after a while because it can feel like you’re not making any headway. On the other hand, many people have bought into the false narrative that abortion is ‘necessary’ for women to have liberty and be equal members of society. The rhetoric is, “Well, it’s about women’s liberty, and it’s about women being equal members of society.”

Cardinal DiNardo: The Holy Father has frequently lamented, “Human beings are disposable.” This type of anti-life message cannot remain. By the way, I want to thank all those in the pro-life movement who have borne the heat of this journey in the last 50 years. Some of them almost from the time Roe v. Wade was decided.

Fritsch Dumalet: We have many Catholic volunteers in the Archdiocese who have been seeking to build a culture of life from the beginning and have fought the good fight. Their dedication is inspiring, and I want to echo your thanks to them. We look forward to continuing this work with them and are excited about the new generation coming up, which will also take up that struggle.

Cardinal DiNardo: I look forward to that new generation coming forward who have a broader vision of human life.

Fritsch Dumalet: It’s interesting; I was recently speaking with someone from Heartbeat International. She made the point that when Roe v. Wade was decided, if you polled most Americans on abortion, the vast majority would say, “I don’t think abortion should be legal at any point; that’s unthinkable to me.”

Fast forward 49 years, and you now have a majority saying, “Abortion should be legal, at least in some circumstances.” You’ve had an almost 180-degree shift. We know that what’s legal is not necessarily what’s moral. But for many, if a practice is legal, it is assumed by many to be morally good or at least morally neutral.

Cardinal DiNardo: Well, what this shows us is that there is still much work to be done in showing people the intrinsic goodness and value of every human life at every stage. We must show the world by our charitable words and actions that all life is sacred. In this time, we must redouble our efforts to protect life at every stage and to care for all mothers, fathers and children who are in crisis and need our help.

To learn more about additional resources or programs, and to find out how to get involved, visit www.archgh.org/prolife.