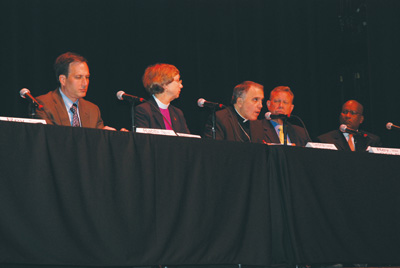 A few weeks ago I participated in a religious colloquium on the death penalty: a subject that always provokes some controversy. It was a panel discussion of various religious leaders in the City of Houston, who shared their reflections on this issue. I was asked to be the Catholic representative; also present were leaders from the Methodist, Lutheran, Presbyterian and Baptist communities, as well as a Rabbi from the Jewish community. (The Texas Catholic Herald covered the event.)

Each leader, from his or her own distinctive faith perspective and personal conviction, expressed opposition to the imposition of the death penalty. The reasons adduced were multiple; a rich tapestry of reflection upon human life emerged in the course of the presentations and the follow-up questions from the audience. It proved to be an excellent means of thinking about ending this practice, especially in Texas.

Social issues of any gravity involve a moral dimension. They concern what it means to be a human being and how we are to live together. Thus, they need to be discussed widely in the public square. A religious viewpoint belongs in the public conversation because it takes seriously the moral dimension of any social (and thus human) question. Likewise politics and political judgments are involved in social questions, but partisan political considerations neither exhaust the understanding of the issues nor cancel other modes of thinking about and analyzing them.

In my presentation I began with a clear statement of the devastation to families and communities that the murder of a loved one or friend can bring. We have an obligation to care for and support those who have been affected by the crime of murder. The support for victims of crime requires energy and compassion. Such support also requires a fitting search for justice. Further, justice is not to be confused with vengeance.

In the Catechism of the Catholic Church, some very succinct remarks about the death penalty are given. Catholic teaching, based on the revealed Word of God and Scripture, is also founded on right reason or what the tradition calls natural law. The State has an obligation to guard the common good and needs to curb the spread of any behavior harmful to people's rights and the basic laws of society. It is the right of legitimate public authority to inflict punishment that is congruent or proportionate to the seriousness of the crime or offense. The punishment redresses the disorder caused by the crime and has a medicinal purpose, as well as a purpose of maintaining public order and safety.

The traditional teaching of the Church is that as long as guilt has been fully and responsibly determined, recourse to the death penalty is not excluded where there is no other means of effectively defending human lives against an unjust aggressor. The Catechism immediately adds that where non-lethal means are sufficient to defend and protect society from aggressors, then public authority should limit itself to using those means, since they are more in keeping with the dignity of the human person.

The Catechism then goes on to quote Pope John Paul II in his encyclical, "The Gospel of Life." There he stated that in conditions today— in which the State can effectively prevent crime by rendering an unjust aggressor incapable of doing further harm — the cases for an absolute necessity of executing offenders are very rare, if not practically non-existent. This small but important development in Church teaching is helpful in our Catholic reflections on the death penalty. The Bishops of the Catholic Church in the United States have been working for years to end the practice of capital punishment in our country. All of us need to continue our own thinking and conviction on this issue, wherever we are on the spectrum of analysis on this issue, and seriously consider the teaching of our faith on the use of the death penalty.

In the Respect Life packet of materials sent out last year by the Pro-Life Office of the United States Conference of Catholic Bishops, there is an interesting pamphlet by Bishop Robert Finn, Ordinary of Kansas City-St. Joseph (Missouri). He writes that the obligations of justice need to be met, but that Divine Mercy, while never violating justice, transcends a human "ought." Every person, no matter how sinful and flawed, has a final purpose and call to salvation — "one that we ought not too easily or unnecessarily preempt."

Accepting punishment can be a good for a perpetrator; from the view of the common good of society the acceptance of punishment can be orchestrated in such a way that does not definitively cut off the perpetrator's invitation and acceptance of a deeper redemption. This is surely a religious argument but should not be dismissed for that reason as we ponder the responsibilities of government in defense and protection of its people. I hope that we will continue to reflect on this significant issue and unpack more completely the wise teaching contained in the Catechism of the Catholic Church. †