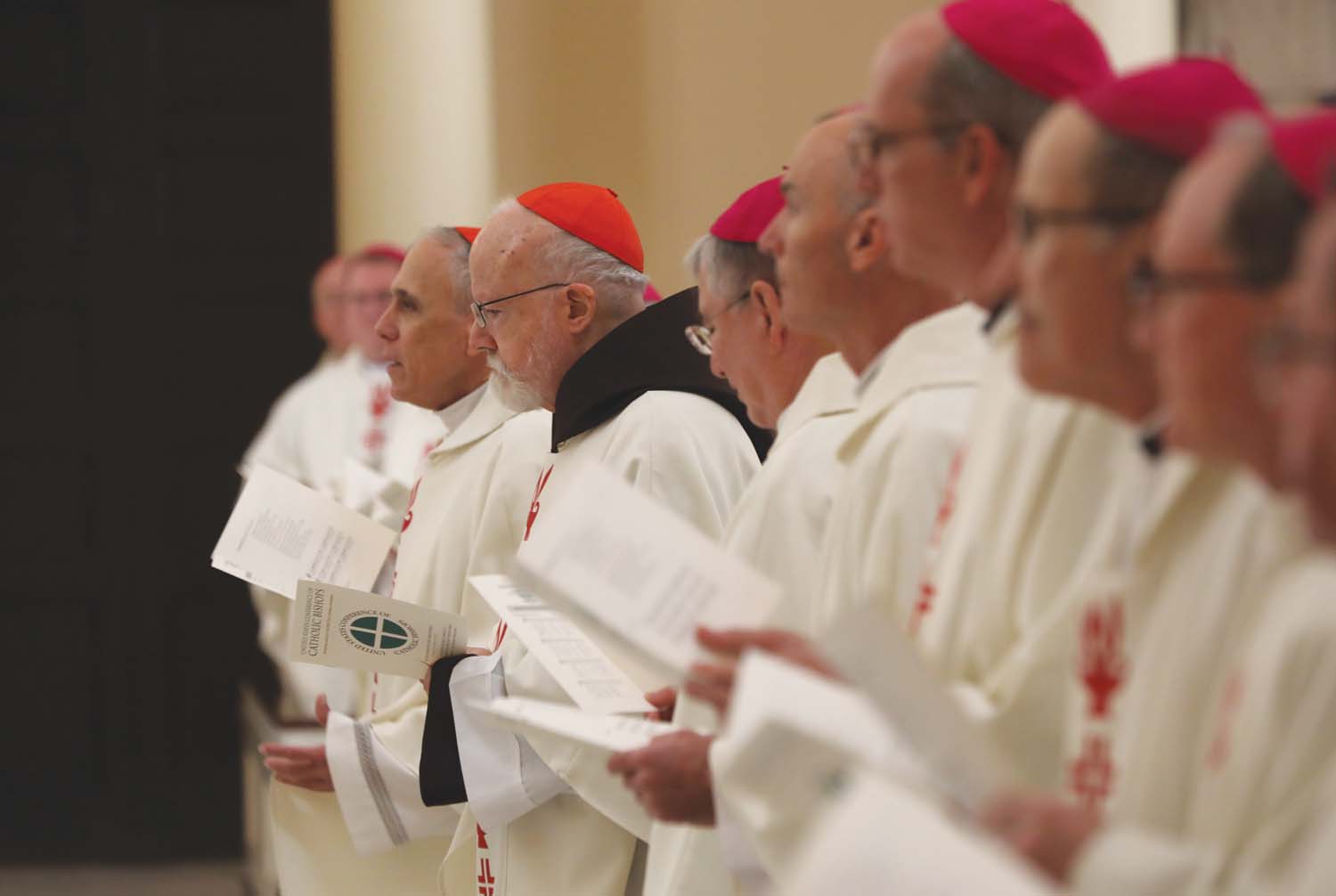 Daniel Cardinal DiNardo and Seán Cardinal O’Malley of Boston arrive for Mass at the Basilica of the National Shrine of the Assumption of the Blessed Virgin Mary Nov. 14, on the first day of the fall general assembly of the U.S. Conference of Catholic Bishops in Baltimore. (CNS Photo)

BALTIMORE (CNS) — Daniel Cardinal DiNardo and Auxiliary Bishop Italo Dell’Oro, CRS, were among the bishops who joined in the election of Archbishop Timothy P. Broglio of the U.S. Archdiocese for the Military Services to a three-year term as president of the U.S. Conference of Catholic Bishops (USCCB) during the bishops’ fall general assembly in Baltimore.

Archbishop William E. Lori of Baltimore was elected to serve a three-year term as conference vice president. The two top officers began their terms at the conclusion of the fall assembly on Nov. 17. Cardinal DiNardo served as vice president and president of the bishops’ conference from 2013 to 2019, respectively.

During the assembly, the papal nuncio, Archbishop Christophe Pierre, addressed the bishops and emphasized the need to remain focused on the Church’s missionary role of spreading the Gospel message.

This is particularly important “as we live through a time of accelerated change,” he said.

Archbishop Pierre said one way to determine if the Church is following its missionary role is to look at how local churches are functioning as evangelizing communities, something he said is especially evident in the current eucharistic revival in the U.S.

The nuncio also reminded the bishops of the need for the Church to reflect the image of a field hospital, a description used by Pope Francis, who said the Church must be about the work of healing those who are wounded. The archbishop said the Church lives this work out in its outreach to immigrants and to young mothers in the “Walking with Moms in Need” initiative.

He said Pope Francis is calling the Catholic Church to be “a missionary Church that encourages everyone to be an evangelist.” A key part of that work involves encouraging Catholic lay faithful to “accept responsibility for the Church,” the nuncio said.

For this to happen, though, he noted that the spiritual and liturgical formation of the laity can’t be ignored.

“If we accompany our people more closely, then we can more easily trust them and encourage their spiritual growth,” he said. He also asked the bishops how they are “promoting that ordinary holiness in our local churches” and if there are sufficient spiritual resources for priests and laity within their dioceses.

Archbishop Pierre also noted that the recent synod report makes clear that many young people in the Church have difficulty accepting Church teachings on a variety of issues. In response to this, bishops must articulate the faith clearly, he said, but they should also “accompany them along the path so that they live their faith in a way that offers them peace of heart, experiencing the true, the good and the beautiful.”

He also urged the bishops not to be “paralyzed by the challenges that we face” but instead to confidently follow their path forward in a synodal way that involves listening, showing patience and having respectful dialogue in the midst of a culture that is experiencing so much division.

“We can sometimes get locked into crisis thinking and crisis talk,” he said, but he also noted that if one looks at Church history, times of crisis can “permit us to discern the presence of the Lord and to refocus on the mission and where we are going together.”

Archbishop José H. Gomez of Los Angeles, who ended his three-year term as USCCB president at the close of the meeting, called on his brother bishops to take time for self-examination and to renew their vocation and ministry.

The archbishop said that because God knows us so well — “better than we can ever know ourselves — God understands that sometimes we can lose our enthusiasm and our sense of purpose; we start doing things more out of a sense of duty than out of a sense of love.”

Pace of preparations is quickening as Synod on Synodality approaches

Work is proceeding — and quickly — on next October’s synod on synodality, according to Bishop Daniel E. Flores of Brownsville, Texas, in a Nov. 15 report to his fellow bishops.

He added, “While admitting the process was not perfect, we have learned much and can do better in the future.”

Coming right on the heels of the diocesan phase is “the continental stage” of consultations, Bishop Flores said. It will consist of a series of 10 online meetings for delegates chosen by each diocese in the United States and Canada, he said. “It’s an additional level of discernment,” the bishop added.