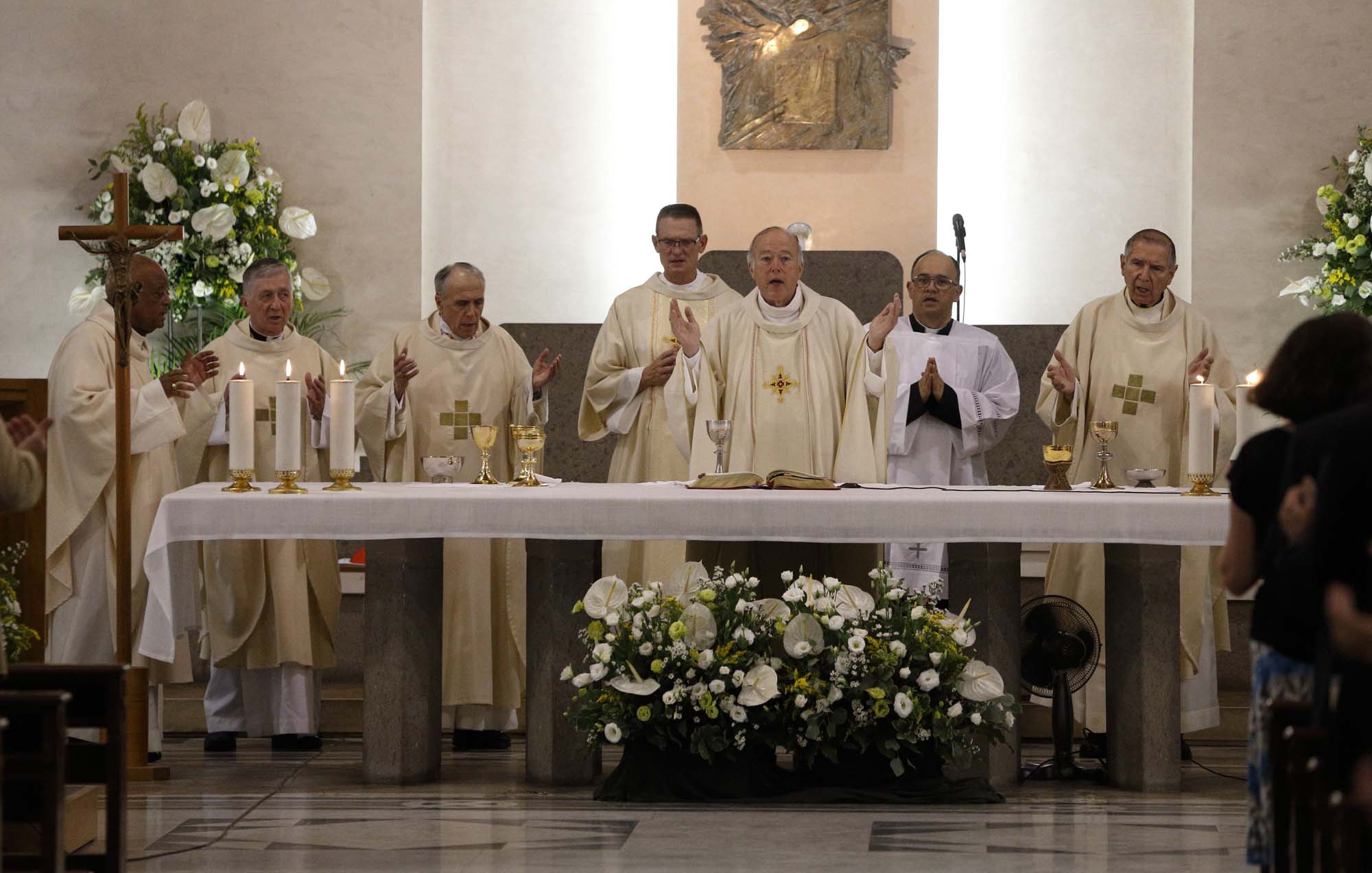 Daniel Cardinal DiNardo, third from left, concelebrates Mass with new cardinal, Robert Cardinal McElroy of San Diego, center, and other cardinals during a Mass of thanksgiving at St. Patrick’s Church in August. Cardinal DiNardo attended the consistory led by Pope Francis for the creation of 20 new cardinals in St. Peter’s Basilica at the Vatican on Aug. 27. (CNS photos)

In his eighth consistory, Pope Francis called upon 20 new men to join Cardinal DiNardo in the college of cardinals, three of which came from religious orders and four new countries, including Mongolia, Paraguay, Singapore and East Timor. A new cardinal, Robert Cardinal McElroy of San Diego, California, joined Cardinal DiNardo as another member from the U.S. Cardinal DiNardo was elevated to the College of Cardinals in November of 2007.

In an Aug. 27 ceremony to create 20 new cardinals, Pope Francis encouraged the College of Cardinals to have the same spiritual zeal for all people, whether they are in positions of power or ordinary Christians.

"A cardinal loves the church, always with that same spiritual fire, whether dealing with great questions or handling everyday problems, with the powerful of this world or those ordinary people who are great in God's eyes," the pope said when he personally welcomed 20 churchmen.

Those who have this apostolic zeal are compelled "by the fire of the Spirit to be concerned, courageously, with things great and small," he said. 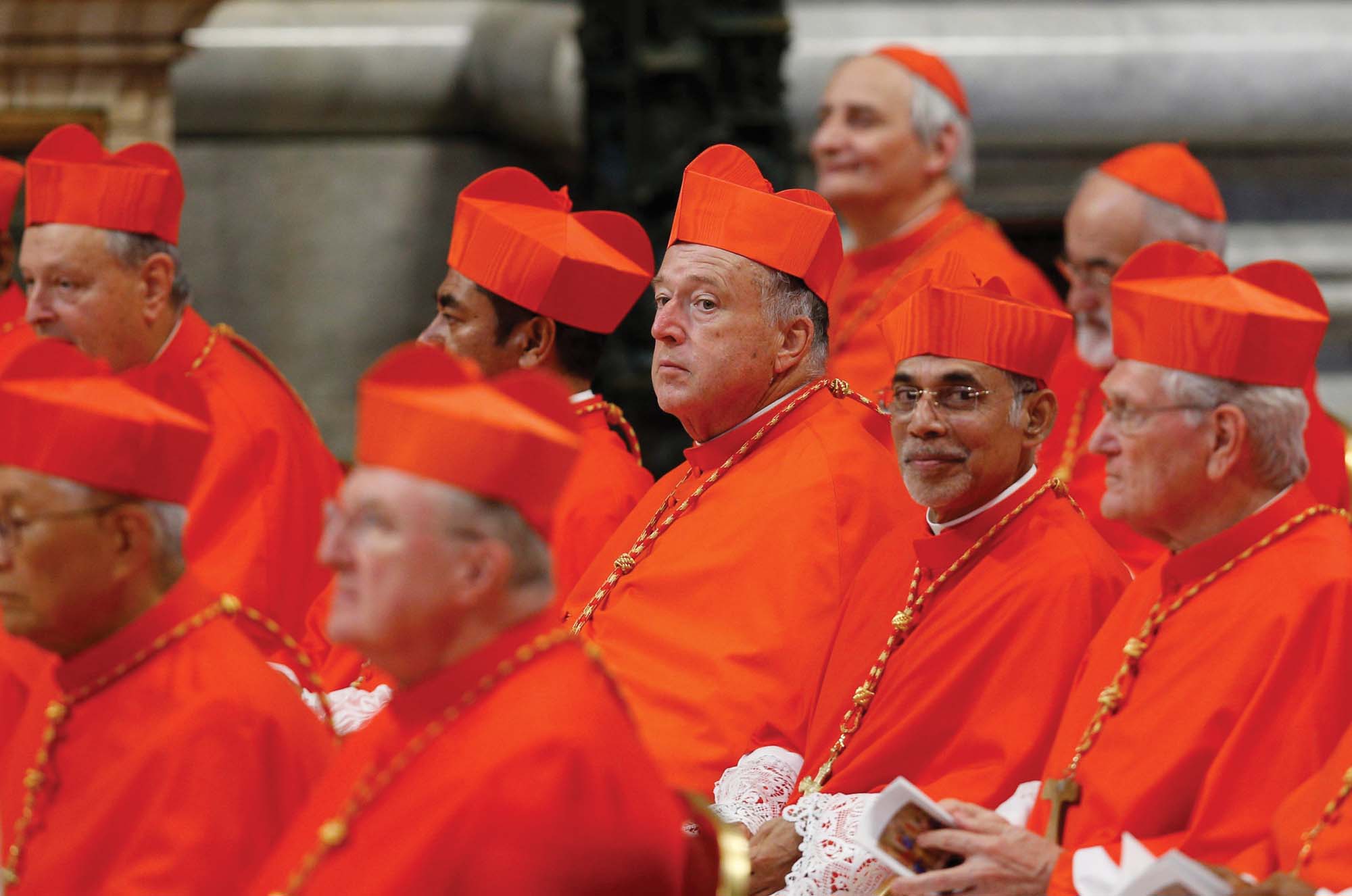 During the ceremony, each of the new cardinals, including Cardinal McElroy, professed their faith by reciting the Creed and formally swore fidelity and obedience to the pope and his successors. They then approached Pope Francis, one by one, to receive their biretta, their cardinal's ring and the assignment of a "titular" church in Rome, which makes them part of the Roman clergy.

In his homily, Pope Francis reflected on Jesus' words to his disciples, in which he declared, "I came to bring fire to the earth, and how I wish it were already kindled."

Focusing on the image of fire, Pope Francis said that the "flame of the spirit of God" represents his love "that purifies, regenerates and transfigures all things." It also evokes the charcoal fire made by the risen Christ for his disciples along the shore of the Sea of Galilee, which created "a familiar setting where the disciples, amazed and moved, savor their closeness to their Lord."

At the conclusion of the consistory, the cardinals also approved the canonization of the founder of the Scalabrinians, now Blessed Giovanni Battista Scalabrini, and Salesian layman, Blessed Artemide Zatti.

VATICAN CITY (CNS) — Jesus' call to spread the Gospel should fill all Christians, especially those within the church hierarchy, with a sense of wonder and gratitude, Pope Francis said.

Celebrating Mass in St. Peter's Basilica Aug. 30 with the College of Cardinals, the pope said this sense of wonder "sets us free from the temptation of thinking that we can 'manage things.' Today the church is big, it is solid, and we occupy eminent positions in its hierarchy. They call us 'eminence,'" he told the cardinals and the estimated 4,500 people present.

"There is some truth in this, but there is also much deception, whereby the father of lies seeks to make Christ's followers first worldly, then innocuous. This calling is under the temptation of worldliness and, step-by-step, it takes away your strength, it takes away your hope, it takes you away from seeing the gaze of Jesus, who calls us by name and sends us. This is the cancer, the woodworm of spiritual worldliness," the pope added, departing from his prepared remarks.

The votive Mass, offered "for the church," was celebrated after the pope met with cardinals from around the world Aug. 29-30 to reflect on the apostolic constitution "Praedicate evangelium" (Preach the Gospel) on the reform of the Roman Curia.

"The work in language groups and exchanges in the hall provided an opportunity for free discussion on many aspects related to the document and the life of the church," the Vatican said in a statement published Aug. 30. The final session of the pope's meeting with the cardinals, the statement said, was dedicated to the Jubilee Year in 2025.