A call from above: Locals watch pope's call to space 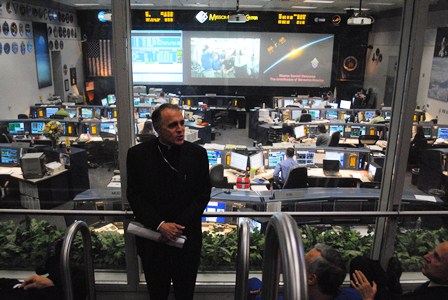 Photos by Jenny Faber/Archdiocese of Galveston-Houston

Daniel Cardinal DiNardo and several Archdiocesan Catholics were invited to Mission Control May 21 to witness Pope Benedict XVI's call to the International Space Station, May 21. Additional photos from the Saturday event are below.

"Welcome aboard, your Holiness."

Space Shuttle Endeavour Commander Mark Kelly greeted Pope Benedict XVI with those words at the start of the pontiff's call to the International Space Station, May 21. 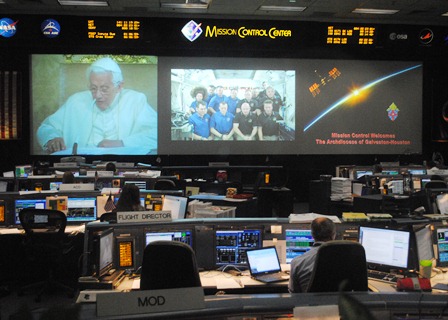 Daniel Cardinal DiNardo and about 40 Archdiocesan Catholics were invited to Mission Control at NASA-Johnson Space Center to witness the historic conversation – the first time any Pope has spoken to astronauts in space.

The cardinal and members of the Archdiocese were welcomed to Mission Control by Charles Bolden, NASA Administrator, and Mike Coats, NASA-JSC Administrator, before watching the 20-minute dialogue between the Vatican and the International Space Station.

After a few introductory words, the pope said the astronauts' vantage point of the earth must give them an extraordinary view of the planet. "You fly over different continents and nations several times a day. I think it must be obvious to you that we all live together on this earth and how absurd it is that we fight and kill," Pope Benedict said. "I know that Mark Kelly's wife was the victim of a serious attack, and I hope that her health continues to improve."

The pope asked the astronauts several questions: How can science contribute to the cause of world peace? How can people become more attentive to being responsible stewards of the planet? What is the most important message the astronauts wish to convey to young people who will be formed in a world shaped by the astronauts' scientific work? Do the astronauts pause to pray while on mission, or is it easier to contemplate those mysteries once they have returned to Earth?

The pope read prepared remarks during the call, but Cardinal DiNardo noted that His Holiness had "a twinkle in his eye" that must have recognized the significance of the astronauts' contributions to humanity. The cardinal told the crowd he was delighted to hear the crew speak of the beauty of the universe. There is precision and harmony in scientific and mathematic equations that also affirm the glory of the One who made the heavens and earth, the cardinal said, and the Archdiocese is grateful to the men and women who use that knowledge to study God's creation.

"The Archdiocese of Galveston-Houston has a special appreciation for all the people who work in the space program," Cardinal DiNardo said. "Their efforts have contributed to the advancement of our city, nation and world. As the Space Shuttle program comes to a close, the Archdiocese is appreciative of the opportunity to join our Holy Father in commending the tireless work of NASA employees and affirming, as Saint Paul says, ‘Christ fills all the heavens.' May God bless all those who work for NASA for helping us learn more about the wonders of our universe." 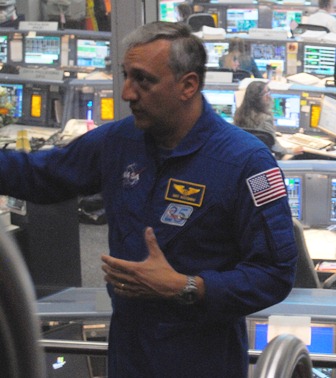 Catholic astronaut Mike Massimino was on hand at Mission Control to answer the crowd's questions about space travel. Massimino spoke about Catholic astronauts' tradition of bringing prayer cards, rosaries and crucifixes into space. He recalled one of his space walks, when he took a moment to look at the Earth.

"As a father, you try to make a nice home for the kids," Massimino said. Gazing at the planet, he said he thought, "How much does God love us to give us such a beautiful home?"

"With all of our religious leaders here, I figured I could get immediate Reconciliation," Massimino said. 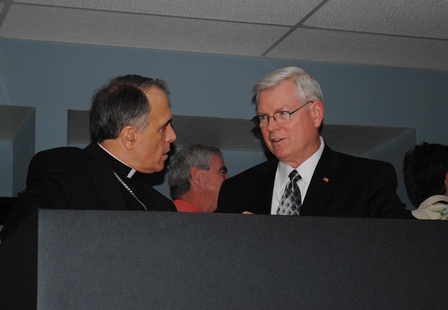 The cardinal met with NASA-Johnson Space Center's Administrator Mike Coats before sitting down for the Vatican's call to the International Space Station. 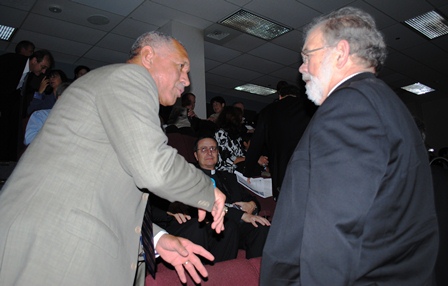 NASA's national administrator Charles Bolden, LEFT, greets Monsignor George Sheltz, Chancellor of the Archdiocese, prior to the Pope's 6:11 a.m. call to space. Father Italo Dell'Oro, Archdiocesan Director of Ministry to Priests, is in the center background. 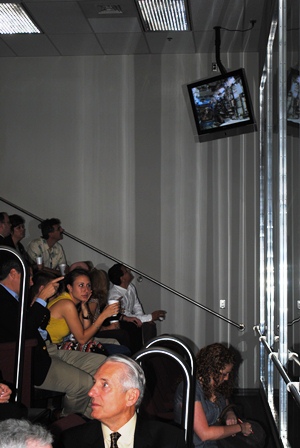 Archdiocesan leaders and parishioners from the Catholic churches that serve the Johnson Space Center arrived at NASA-JSC at 5 a.m. to watch the historic call. In the foreground is Dr. Robert Ivany, president of the University of St. Thomas. 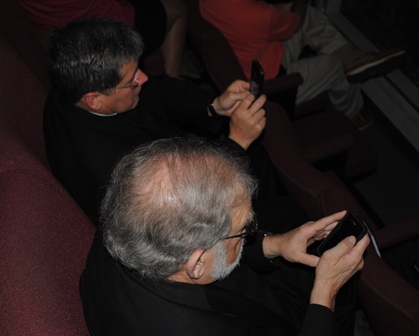 Father Paul Felix, LEFT, of Shrine of the True Cross Church in Dickinson and Monsignor Sheltz ready their smart phones to capture a photo of Mission Control. 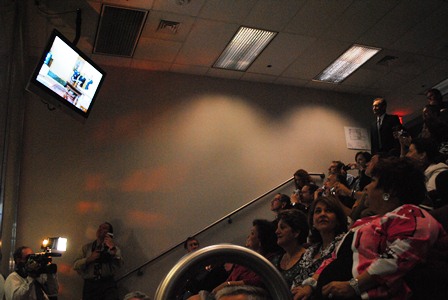 The Pope's call was telecast on the main screens of Mission Control and on television screens inside the viewing room.