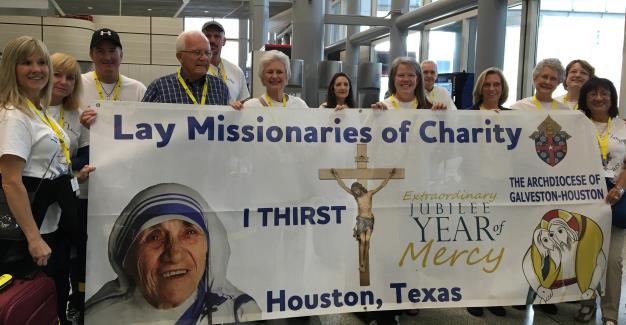 On Wednesday, Aug. 31, 2016, Father Desmond Daniels, a parochial vicar at Christ the Good Shepherd Catholic Church, along with 25 parishioners from the Archdiocese of Galveston-Houston left on a pilgrimage to Rome for the Canonization of Blessed Mother Teresa of Calcutta, MC.

At 9 a.m. just prior to their departure, Father James Burkart and Father Daniels celebrated Mass for the pilgrims at Christ the Good Shepherd Catholic Church, 18511 Klein Church Road in Spring.

Father Daniels, a native of India, had the honor of encountering Mother Teresa three times, the third time shortly before her death. Among those traveling to Rome with Father Daniels is a lay missionary with the Houston area Missionaries of Charity community (the community of sisters founded by Blessed Mother Teresa). They will attend and participate in the Canonization Mass.

“Essentially, her heart went out to and reached out to the poor,” said Father Daniels. “She was very human…By her own life example people are attracted to her charisma. It is amazing because she impacted the whole world.”

“Being the Jubilee Year of Mercy and given attention to the poor and marginalized in society, this is the perfect time for her Canonization to happen,” Father Daniels added.

Blessed Mother Teresa, who won the Nobel Peace Prize in 1979, was widely known as a living saint as she ministered to the sick and the dying in some of the poorest neighborhoods in the world. Her simple service touched the hearts of millions of people of all faiths, will be canonized by Pope Francis at the Vatican on Sunday, Sept. 4 at 10:30 a.m. (3:30 a.m. CST).

About Blessed Mother Teresa
Born Agnes Gonxha Bojaxhiu in 1910 to an ethnic Albanian family in Skopje, in what is now part of Macedonia, Mother Teresa went to India as a Sister of Loreto in 1929. Receiving what she described as a “call within a call,” she began her missionary work with the poor and laid the foundation for what would become the Missionaries of Charity.

Following her death in 1997, St. John Paul II waived the usual five-year waiting period and allowed the opening of the process to declare her sainthood. She was beatified in 2003. Pope Francis approved a miracle attributed to the intercession of Mother Teresa, thus paving the way for her canonization.

Sept. 4, the date chosen for her canonization, is the eve of the 19th anniversary of her death and the date previously established at the Vatican for the conclusion of the Year of Mercy pilgrimage of people like her, who are engaged in works of mercy.