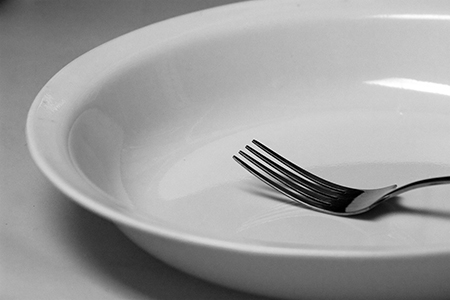 Today we welcom Joseph Magee, Director of Campus Ministry at the Catholic Student Center at Sam Houston State University, to the Daily Vine to talk to young adults about fasting durign the season of Lent.

The three traditional practices for the observance of Lent are prayer, fasting and almsgiving. And since the purpose of Lent is to prepare for the celebration of Easter by strengthening our relationship with God, it makes sense to spend more time with Him in prayer and conversation, as well as imitating the God who is love by performing acts of love and charity. But young adults often ask why fasting or sacrifice is part of the traditional observance of Lent. Obviously, Jesus set an example of fasting with His forty days of temptation in the desert, and made the ultimate sacrifice of Himself on the cross for our sins. Jesus gave up comforts of life, and His very life itself, to show us the way to the Father, the way of love which he shares with the Father. But even Jesus’ example invites us to reflect why sacrifice is a necessary part of love.

Ultimately, every truly great human undertaking requires commitment and every commitment requires sacrifice. This is especially true of the Christian life where true faith and true love are impossible without sacrifice. You do not really have faith in God and his revelation if you only believe what makes sense to you; that’s just having an opinion. Real faith means accepting what God reveals because He is trustworthy, and His Word, i.e., Jesus, His Son, is Truth. More than just accepting God’s Word as true, true faith is placing your trust in God and His promises, sacrificing a trust one’s own power, in order to accept and carry out God’s will.

Likewise, you cannot really love another person if you care for them only when you feel like it. That would just be following your own whims and emotions. True love requires giving up your own desires for the sake of another, caring for them even when you don’t feel like it. True love is a commitment of total self-giving of one’s self to another, but this requires one to sacrifice holding one’s self back. It is in giving of yourself that you find the true meaning of freedom, and through it, of fulfillment.

So Jesus models a life of commitment to God, the God who is love and who gives Himself totally and completely in Jesus (Emmanuel, God with us). Jesus models the sacrifice that love requires, and which is the ultimate expression of human freedom in His total gift of Himself for our sake.

But since most of us fall far short of being able to give of ourselves totally, Lent is a time for a spiritual work-out. Most of us are familiar with the idea of a physical work-out: we go to the gym to increase our ability to perform feats of strength by performing those feats with less strength. So by doing small acts of sacrifice we strengthen our spiritual muscles to be more able to perform greater acts of sacrifice. The goal is ultimately to sacrifice ourselves, as Christ did, by dying to ourselves to live for Christ, to live no longer for ourselves, but for Christ to live in us.

Joseph Magee, Ph.D. is the Director of Campus Ministry at the Catholic Student Center at Sam Houston State University. He earned his doctorate from the Center for Thomistic Philosophy at the University of Saint Thomas in Houston in 1999. He lives in The Woodlands with Maria, his wife of nearly 20 years.